Behind the Wall Series – One Life

Why We Chose the No Respawn Rule

[“Behind the Wall” is a regular content series that explores various aspects of Rainbow Six Siege, based on the first demo shown. All design and content presented in these articles is a work in progress, and subject to change between now and the final release of the game.]

The environment had been carefully observed, extraction points considered, and orders expertly given for a surgical rescue operation. The doors have been breached and you hear “tango down!” come in across the radio. In your haste and momentary excitement, you blindly rush into a room, and blam, it’s all over for your operator. One mistake gave the enemy the edge he needed to take you out.

If this sounds familiar to you, it’s probably because you’ve played Tom Clancy’s Rainbow Six. Originally released in 1998, it popularized a new type of shooter where planning and tactics mattered, in an era dominated by over-the-top guns-blazing titles like DOOM and Quake. It was a heart-pounding experience through every mission, and we wanted to revive that lethality and tension within Tom Clancy’s Rainbow Six Siege. Ultimately, we decided that the best way to accomplish this was to bring back the No Respawn rule and implement it in such a way that we like to refer to as One Life around the studio.

When you’re not allowed to respawn during a match, twitch reflexes aren’t the only skills that keep you alive. Teamwork, map awareness, planning, adaptability, communication, and leadership become just as important to win.

One Life is exactly what it sounds like. During each round of Tom Clancy’s Rainbow Six Siege, you have “one life” to live, and if you lose it, you don’t get it back until the next round. When designing the game, we found that above all else, the No Respawn rule touched the three main pillars of what we want in this game: teamwork, tactics, and tension. Not only are these three pillars at the heart of Tom Clancy’s video game series, but they’re arguably absent from the FPS market today. Even when playing on a team, run and gun titles emphasize twitch reflexes while neglecting other skill sets, and you may feel disconnected from the action and all alone in your plight. With Siege, that’s not the case.

As part of our ongoing process to perfect the Tom Clancy’s Rainbow Six Siege gameplay experience, we hold internal tournaments here in the studio where everyone dukes it out for bragging rights. We’re all huge FPS fans, so this is a very fun way to work together as a team and get feedback on design direction. During the early stages of development, we didn’t have the No Respawn rule, and the same guys were always at the top of the leaderboard. Level Artist Chris Hendry and Gameplay Programmer Adam Crawley are fantastic solo players, and their teams dominated pretty much every round. Creative Director Xavier Marquis decided to toss this No Respawn rule in to see what would happen, and right away Hendry and Crawley began to struggle, and the developers who had never made much of an impact were now moving up the leaderboard, leading their teams to victory. It didn’t take very long for Hendry and Crawley to climb back up the ladder, but they had to adjust.

You need to adapt your tactics as the dynamics of the game change.

When you’re not allowed to respawn during a match, twitch reflexes aren’t the only skills that keep you alive. Teamwork, map awareness, planning, adaptability, communication, and leadership become just as important to win. To be completely straightforward, the game became a lot more stressful… It went from everyone leaning back in their chairs trash-talking, to being on the edge of their seats carefully coordinating tactics. Game designer and former SOCOM developer Chris Lee explains the impact that the No Respawn rule had during our internal tournaments.

“It was a surprisingly good change and we didn’t think it was going to work. I thought that only the most hard-core players would like it. It turned out that it really opened up the game to many different types of players. The developers who were longtime FPS players initially found it difficult because they were only good at reaction time. They weren’t communicating, playing tactically, or thinking about the consequences. Their K/D ratio was high before, but after introducing One Life, they stopped thinking about K/D ratios and more about how each player could work together for the win. Developers who weren’t as good before played slower, thought carefully about the situation, and ended up doing better on the leaderboard. Because One Life rewards this kind of behavior, it puts well-rounded players at an advantage over pure run and gunners, which is what the Tom Clancy’s franchise is all about. They utilize a complete skill set and the rest of the development team really liked that, since going back to its roots is what we wanted to do and the rule stuck. It wasn’t something we predicted, and we were really happy with how it turned out.” 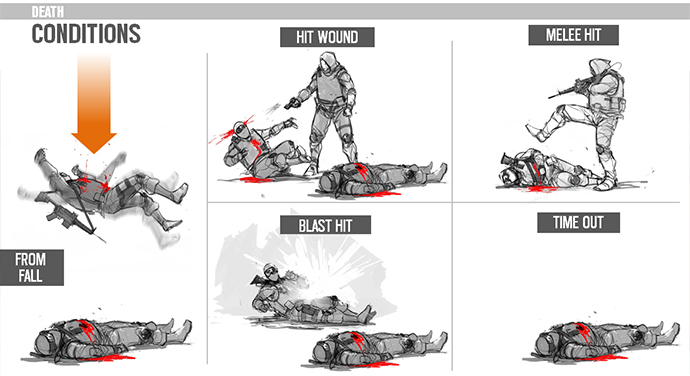 From one of our creative briefs – a few different ways you can lose your One Life.

However, there’s a reason why the No Respawn rule is something we’ve seen fade out of gaming in the past decade. In a traditional FPS setting without respawn, once the player is dead and out of action they don’t have very much to do. As a player, you want to stay involved, and getting placed on the sidelines with nothing to do is not the ideal experience. The reason we consider One Life to be a different concept in this game is that you will be actively involved the whole time. Yes, losing boots on the ground creates a disadvantage in firepower, but the player still contributes to the team by becoming a source of information. They are able to use limited visibility tools, like the drone and security cameras, or survey from a chopper above the operation zone to keep their team informed of the enemy’s movements.

Matches are short, precise operations. Even if you die at the outset, you won’t be out of action for more than three minutes at a time. With this, we hope to provide an intense experience, without taking you out of the game for very long

We call this Support mode, and it’s a crucial aspect of the round as the team balances firepower against information. For designers, it provides an opportunity to develop things that you don’t see in a lot of other shooters. Andrew Witts is a game designer on Tom Clancy’s Rainbow Six Siege responsible for lots of items in the game, including the gadgets you’ll use in Support mode. He gives a scenario in how tactics will constantly change throughout the game with One Life in effect.

“One example is that you might find that the objective is in the master bedroom. As defenders, you have a strategy where you put a guy on each floor to flank and punish attackers sieging the house. As soon as one defender goes down, though, you have to regroup the entire team around the objective. Maybe you’re down 4 vs. 5 and the attackers are coming in through the basement. There are only two stairways up and your dead teammate gives you info on where they’re coming up. You trap one stairway and blow a hole in the other one, rerouting the attackers through a choke point where you can get the drop on them.” 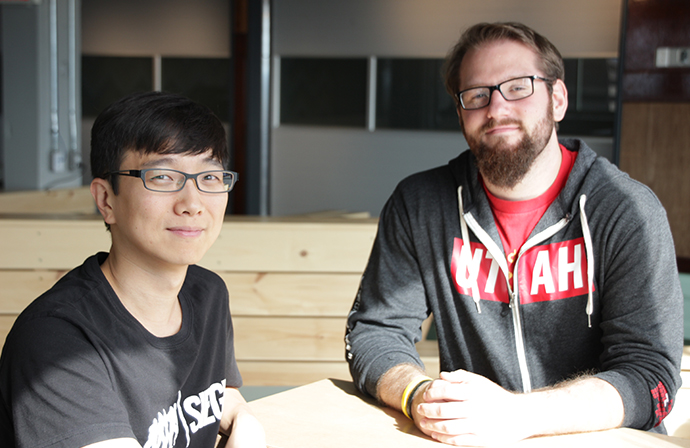 Even still, you’re not going to stay in Support mode for very long. From what we’ve shown so far, matches are short, precise operations. Even if you die at the outset, you won’t be out of action for more than three minutes at a time. With this, we hope to provide an intense experience, without taking you out of the game for very long. Witts offers a little perspective as a longtime fan of the series.

“I think it’s really cool to rediscover and reiterate on some old points and basics in a tactical game. When you go back to Tom Clancy’s Rainbow Six, you go back to one of the first tactical shooters, seeing what makes it tick, deconstructing it and then reassembling it for the current generation. Being a part of that is really cool as a fan of the previous games. I’ve seen the metamorphosis and it’s great to rediscover the basics.”

Usually when a developer says they are going with “something for everyone,” it means a dumbing down of the experience. With us, we want One Life and Support mode to mean that there will be more play styles and skills rewarded. It takes teamwork to win, and those with twitch reflexes are going to need other players to work well with, and vice versa. If you’re a hard-core-shooter kind of player, you’re going to have some new skills to learn, and ultimately become a better gamer. Most of all, we’re looking forward to harnessing this as a way to bring back those moments you remember from the first game, your heart pounding as you kick open that first door.

Discuss on the Subreddit!

Genevieve "Livinpink" Forget - Community Developer, Ubisoft Montreal
Gen goes by the handle Livinpink in the gaming industry. She is known for her involvement in multiple competitive gaming communities through her work as eSports media and personality. She participates in weekly livestreamed Dungeons and Dragons sessions. She also tweets from @R6ComDevs.