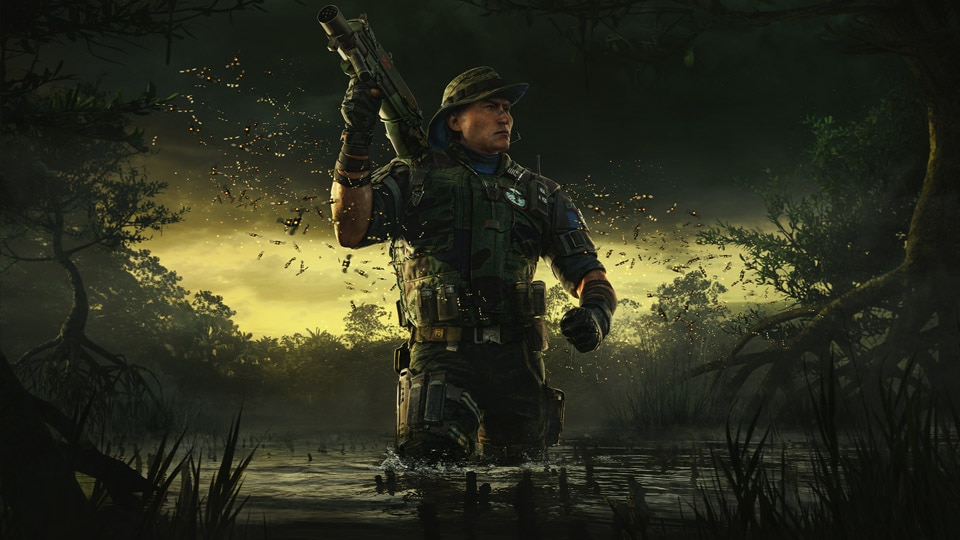 “Find the weakness. Exploit it.” - GRIM

Operation Brutal Swarm clears the way for our new Singaporean Attacker. Raised in a survivalist household in Jurong, Singapore, Grim joins Nighthaven with one goal - to get the job done.

Grim's experience in the EOD taught him how easily things can blow up when a target's position and proximity is unknown. That's where the Kawan Hive Launcher comes in, with no reload and a low fire rate the launcher allows for versatile gameplay, using Intel-Gathering and Area Denial to counter roamers, make entry, and protect objectives.

The Kawan Hive Launcher's ability to secure a position for a limited amount of time enhances cooperative play by sharing red marks with the team. Defenders encountering this unique ability will have to decide to either fight with their position exposed or flee and restrategize. Attackers will want to pay particular attention to Specialist Mute's position and device placement - The Launcher's 5 Rounds won't count if they're countered.

Educated in the School of Army Reconnaissance, Grim knows how to be stealthy and obtain information, and as a 1 Health Operator it's best to rely on evasive tactics and speed. The SG-CQB isn't subtle as a primary weapon, but it has power, add in the option of a 552 Commando and this arsenal allows for brutal offensive play.

Being 3 Speed may be the star, but the Breach Charge and Claymore are the cherry on top of Grim's vertical play loadout. While the Charge will help you push through, the Claymore will guarantee that once you're in, no one will come at you from behind.

Head over to Twitch on August 21st for the full reveal of Brutal Swarm.