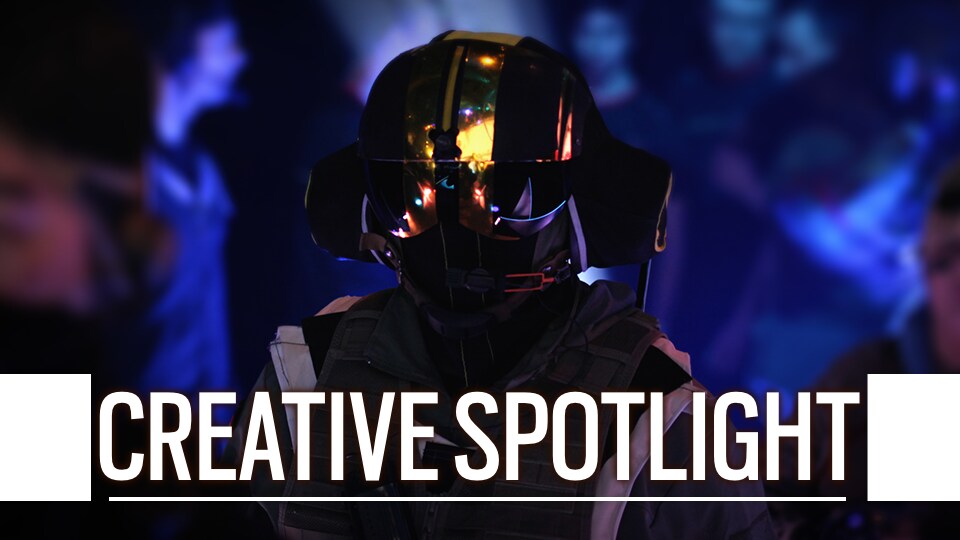 The Rainbow Six community has many outstandingly creative people that continue to amaze us with their creative, funny and astonishing contributions. In our Creative Spotlight series, we highlight these community members and give you an inside look into their lives!

For this Creative Spotlight we talked to Killimaze, a cosplayer who started to bring Jäger to life back in 2017. Since then, he has created several skins for Jäger and we love the many creative and funny ideas he comes up with, as well as the passion he puts into it. In this article you will find out more about him and his cosplays, as well as his interest in Pro League and streaming!

Hello Killimaze! Thank you for taking the time to answer a few questions for us!

Please introduce yourself and tell us - who are you outside of Rainbow Six Siege?

Killimaze: Hello! I am known as Killimaze in the Siege community, but outside of it I am Justin from Orlando, Florida. During the day, I work at my retail job, and during the night I stream! When I am not cosplaying, streaming, or playing Siege, I usually spend some time with my super supportive friends. We love going to a local gaming bar or watching movies together. Fun fact: sometimes I fall asleep in my chair while I wait for people to come online.

Killimaze: In 2015-2016 I was trying to build a Mandalorian cosplay for a local convention. When I received the helmet it was badly warped, and I was unhappy with my progress. After playing Doom 2016, I decided to turn what I had for the Mandalorian cosplay into a 1993 Doomguy cosplay. That experience was so much fun, I decided to make a Siege cosplay as my next project for 2017. I picked Jäger as the operator to cosplay as I was building on a budget back then and found affordable parts. After attending the Six Invitational 2018, I decided to make the most accurate Jäger cosplay I could possibly make. It took a long time, but I am super proud of what I have created.

You’ve done multiple iterations and skins of Jäger in the past 2 years. Which one of those is your favorite? Why?

Killimaze: I am really happy to have the option to customize my Jäger cosplay through changing the headgear, jacket, and jeans. I’ve made the Default one, the 2016 Pro League "Wasp", a Rogue version and a headgear I call "Daft". The Daft headgear is a version of the default, but with an LED panel that I installed on the visor. While the LED visor is cool, my favorite creation has to be the "Wasp" Pro League skin. I really love how sleek the black and gold looks and since I have switched from Xbox to PC, I no longer have the skin in- game, so having it in real life is pretty sweet!

Is Jäger your first operator choice as well when playing on defense? (If not, who do you like playing most?)

Killimaze: Funny enough, I am usually not the Jäger player on my team, as I tend to play more on site. Typically, I will play heavy anchor and denial operators. Smoke and Kaid are often my preferred picks. Jokingly, if my team needs a Jäger, they usually ask me to play the role due to my cosplay!

You do not only cosplay Rainbow Six Siege, you also stream it on Twitch. Tell us more about that!

Killimaze: Streaming on Twitch is my favorite thing to do during my day. For many years I have been wanting to pursue my dream of becoming a full-time content creator/streamer because doing these things gives me the greatest joy. I started streaming in January 2018, and I became a Twitch affiliate 21 months ago. I mainly stream Rainbow Six Siege, as it is my favorite game and I enjoy playing it the most. I usually play Ranked as I am a super competitive person, so I try to give it my all while playing. I put a lot of effort into growing my channel, and my goal is to become a partner in the future!

We love the cool programmable visor you sometimes use for your cosplay. Can you tell us a little bit more about it?

Killimaze: Well, I have been a Daft Punk fan for many years and since the Rock Star Bundle for Jäger has a bunch of Daft Punk references, I had the idea to create this headgear. I used a pair of Chemion glasses, took it apart and installed them into one of my spare visors. The panel fit right in after some modifications, and it connects to my phone via Bluetooth. I can make the visor say pretty much anything I want it to, and this adds a new layer of expression while wearing a face concealing cosplay. I am so happy that this idea worked out!

What’s the best moment you’ve had while wearing your cosplay?

Killimaze: This cosplay has given me many unforgettable moments, but the one that has to absolutely take the cake was at the Six Invitational 2019. All the cosplayers were separated by attackers and defenders and then we were told to walk on the stage floor, so the main broadcast could show us while two of the competing teams walked in. Standing there, in front of thousands of people watching live and online combined, truly made me feel proud of what I made.

Which Pro League team are you rooting for and which one do you think will win the Six Invitational 2020?

Killimaze: I am a huge fan of the NA Pro League scene, even if the history of the LAN finals doesn't really favor NA. At the moment, it is a bit hard to say who I will be rooting for as the NA shuffle has changed a lot. I would say Dark Zero has a very promising lineup. Now if we get into a situation where NA gets eliminated, my favor will go towards Team Empire or NaVi. If we get NaVi in the finals, I will place my guess on them winning it all.

What is a song you can’t stop listening to lately and what kind of music do you enjoy in general?

Killimaze: “Converter” by Mega Drive is what I usually listen to while warming up my streams. According to my phone, my most played songs are "Around the World" followed by "Human After All" by Daft Punk. I listen to 90s house, electronic, Future Funk and synth. Daft Punk, Gorillaz, Mega Drive and Perturbator are some of my go to artists.

Do you have any tips or recommendations for people who want to get into cosplay?

Killimaze: Cosplay is a very fun experience. From finding the items needed for the build, to wearing what you have proudly made—it’s all great. Anyone can cosplay, and you can be whoever you really want to be! My tips to get started are: 1) pick a character you really have an interest in. 2) create a budget for the cosplay and do research for the possible cost of the build. 3) compile your parts and bam, you have started your first steps into cosplay!

Thank you so much for answering our questions Killimaze! Please check them out using the links below to see more of their cosplays and streams and give them a follow:

Check out our last Creative Spotlight on the artist CaptBombastic!