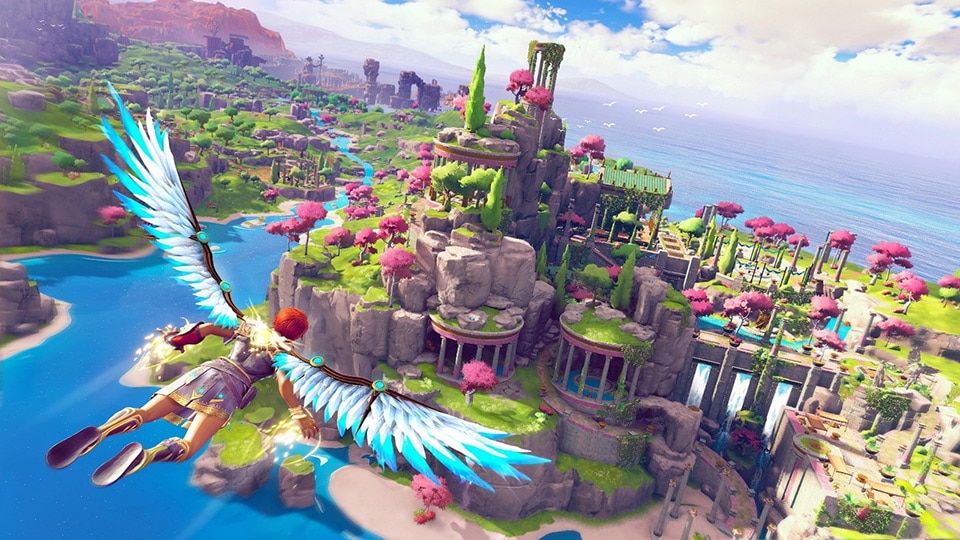 Play as Fenyx, a new winged demigod, on a quest to save the Greek gods and their home from a dark curse. Take on mythological beasts, master the legendary powers of the gods, and defeat Typhon, the deadliest Titan in Greek mythology, in an epic fight for the ages.

What is Immortals Fenyx Rising?

Immortals Fenyx Rising is a new franchise of Ubisoft. This first game set up Fenyx a young demigod of the Greek mythology, who must save the world.

A funny duo, Prometheus and Zeus, are narrating this action-adventure story.

Fenyx woke up on Golden Isle, overran with beasts and demons from the Underworld, because Typhon, the worst Titan, have stolen the holy land from the Gods and began causing havoc due to a curse.

After unveilling the main character’s origins, players must gain first the Gods' trust to collect their blessings, gifted abilities, and weapons to take down Typhon.

Then, the vanquished gods need to be reunited with their 7 essences, in each of the 7 regions of Godden Isle, to regain their power.

Along the way, there will be many quests.

Players are free to explore their surroundings, which will reveal a wealth of puzzles to solve, ruins to explore, and magical portals to dive into.

Third Person Shooter (a player views the action as if from a position behind the character they are controlling -external point of view), Open world, Action adventure game

This video game is intended for teenagers or young adults. The themes addressed for 12-17-year olds are as broad as: learning conflict management or fighting a battle between Good and Evil.

The content can be subversive, but it is restricted: the degree of violence is lower compared to adult games (usually no blood, nor gore)

The average completion time for the main story depends on the time spent traveling the world or completing the supporting content: The main story takes about 20/30 hours to complete and players can complete the 20 hours of additional content if they want to. Thus, if we add all the sessions, the whole game can last at least 50 hours.

IFR Season Pass contains at the moment 3 expansions of the game called A New God, Myths of the Eastern Realm, and The Lost Gods

This game has many accessibility features