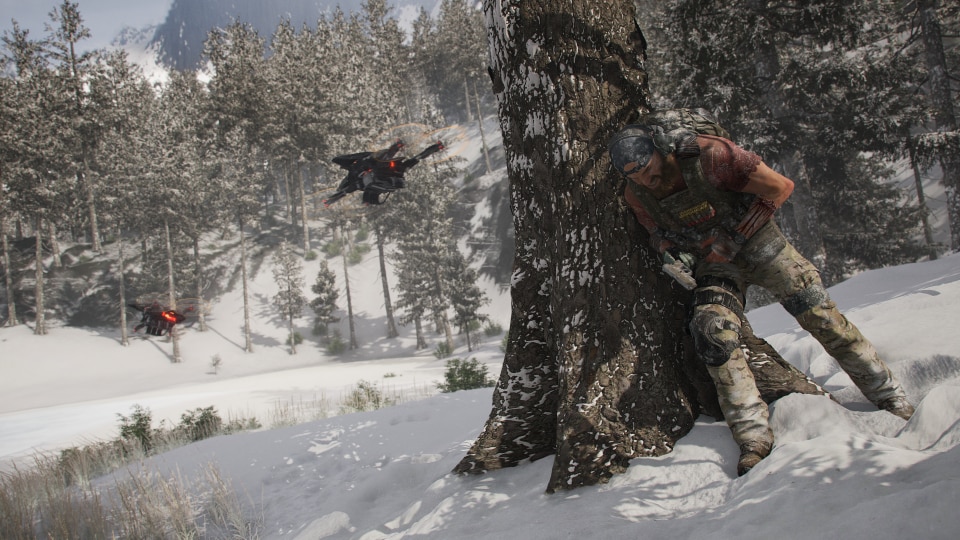 How you approach your missions is always up to you. Whether you go in guns blazing or choose the silent path, you’ll have tools at your disposal to do it like a real Spec Ops.

You have access to several new features in Tom Clancy’s Ghost Recon Breakpoint that will enhance your stealth approach.

You will now be able to pick up downed enemies. This allows you to take out enemies silently and move them to more hidden areas so you can continue your stealth run undetected.

You can also carry your downed friends and become the hero of the situation by getting them to safety and healing them before going back on the field. 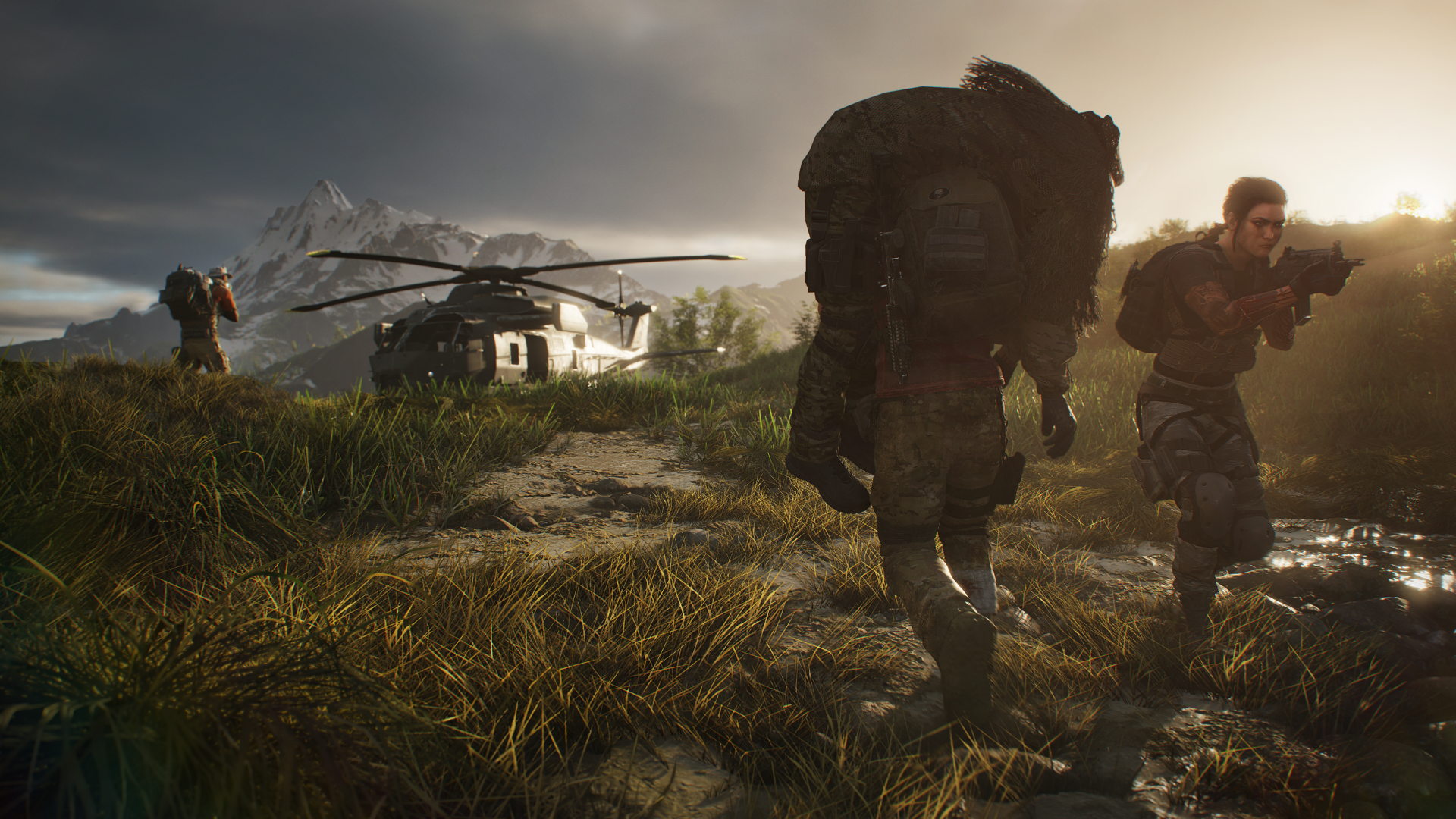 Chain fences will keep out Ghosts no longer! This new unlockable item grants you a Breaching Kit that allows you slip through certain fences unnoticed. Your co-op teammates will also be able to follow you through the fences you open with this item.

In Tom Clancy’s Ghost Recon Breakpoint, you’ll be pitted against Walker and his Wolves, but they’re not the only threat. Working with the Wolves are Sentinel, a Private Military Contractor (PMC) that have been hired to take care of security throughout the island.

During the stream we showed three Sentinel archetypes, with more coming over the summer!

The Rocket Gunner is a brand new enemy in Tom Clancy’s Ghost Recon Breakpoint. Their role is to challenge the player at long distances, forcing the player to stay on the move with explosive attacks that can have a cascade effect. The rocket backpack is the weak point of the rocket launcher, something players need to keep in mind when trying to take it down.

The Breacher challenges the players during close-distance engagements. It is vital to not let Breachers – who are equipped with blinding flash grenades and a shotgun that suppresses players – get close.

The Heavy is an armored behemoth that all players will learn to fear on the ground. A high level of armor will require players to aim for his helmet and head, while the Heavy’s minigun will control the battlefield up until it heats up and needs to cool down. Both of these opportunities will be key to take this enemy down!

The enemies may be the toughest you have yet to face, but Tom Clancy’s Ghost Recon Breakpoint is a military shooter game. Unless the human enemy is wearing a helmet, like the Heavy archetype, headshots will be one-shot kills if you’re able to land the hit.

Enemies will work together better than ever before to take you down.

On top of the new enemy archetypes, enemy AI has evolved to provide a better stealth experience to all players. Now, if the enemy becomes suspicious, depending on the risk of the situation, they will choose to either stalk the player’s last-known position, or send out a radio call to either alert the camp or send over reinforcements.

The player’s last-known position will also be managed more realistically than before, with enemies needing to investigate before they can actually find you if you remain hidden.

The Wolves and Sentinels won’t be your only threat on the island of Auroa. Tom Clancy’s Ghost Recon Breakpoint will feature new mechanics that kick up the intensity of your military survival experience. 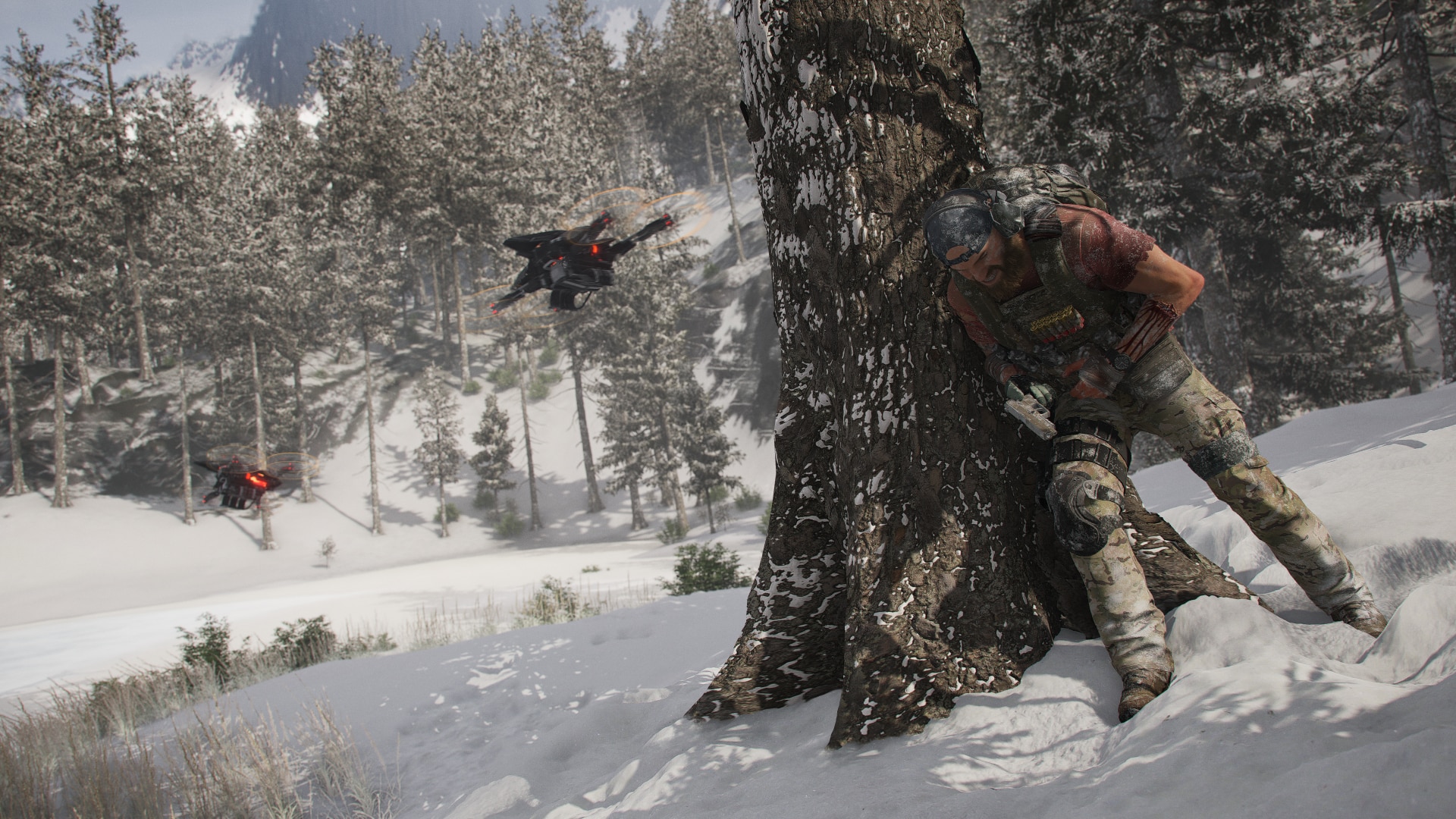 There are several tiers of damage that can occur depending on how you get injured.

In the first level of wounds, your Ghost will start to occasionally limp and will see their stamina reduced. In the second level of injury, the Ghost will limp heavily, start bleeding, and face difficulty aiming. In the third tier, the Ghost will be unable to run, stumbling and limping with only his handgun to protect him.

You will be able to use items to bring your Ghost back up to fighting shape. Bandages will help you gain back tiers of injury, while syringes will top your current level of injury’s health.

You might get hurt, but a Ghost can always fight back no matter the odds. We’ll have a whole new set of brutal CQC finishers to execute your enemies with ruthless efficiency.

Players will have a slot where they can equip a melee weapon that dictates which set of lethal CQC finisher animations your Ghost has.

At launch you will have access to two different sets: one with knives, one with karambits. We’ll have different animation sets too, so if the enemy is isolated there is a longer animation to showcase your kill.

There are different move sets that will trigger different animations. For example, if you are in stealth or active combat, or if you approach from the back or the front, it will look different.

We will have different skins for both sets of weapons, so you can find either a knife or a karambit that fits your Ghost’s look. You’ll be able to see your unique weapon skin during the animation sets.

Tom Clancy’s Ghost Recon Breakpoint will be fully playable in co-op with up to four players, but we know there are some Ghosts who prefer to take on their missions solo. Ghosts will always have the choice to play how they want.

If you want to group up with your friends and take on the Wolves together, you can assemble your squad of badass Ghosts. If you want to experience being the solo operative fighting behind enemy lines, you can do that too.

In order to really immerse yourself in the fantasy of being lost behind enemy lines, you will not have AI teammates while playing in solo. We wanted to offer our players more versatility in how they can approach the game.

This is also in line with the narrative. In the trailer, your teammates from Tom Clancy’s Ghost Recon Wildlands were part of the big helicopter crash that you survived.

You will still have access to the sync shot feature while playing solo, thanks to three mini-drones that can assist you in battle by taking down up to four enemies at once. However, you will need to find solutions to heal yourself, because if you get downed while playing solo, it’s game over.

A big part of the customized experience in Tom Clancy’s Ghost Recon Breakpoint is the classes available across PvE and PvP modes. There will be four available at launch, two of which were revealed on the stream. 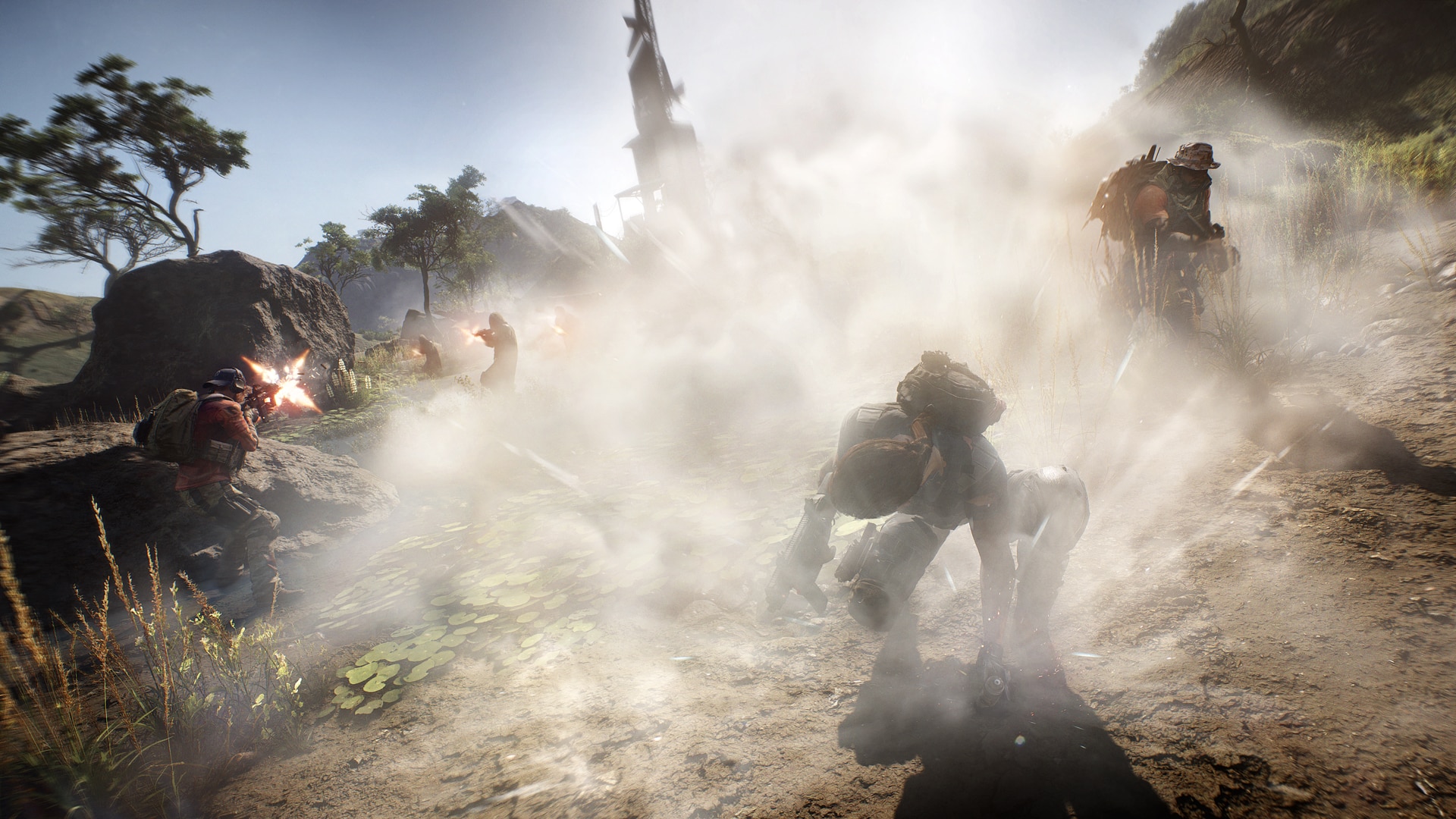 The Panther class is for players who want to become masters of infiltration. Panthers quickly engage enemies at close range before retreating back into stealth. Their special skill allows them to create a cloud of smoke, making them invisible to the enemy for a few seconds and giving them the opportunity to counterattack or disappear.

While Panthers do not have access to loud or heavy weapons, they compensate for that by being harder to detect, quicker on the move, and facing no damage reduction when using suppressors.

For all the sniper players out there, the Sharpshooter is the class of choice. Skillful and deadly, Sharpshooters can load three special bullets in their rifles, dealing large amounts of damage to enemies.

Sharpshooters are also able to hold their breath longer than other players in order to stabilize their aim, and they reload long-range weapons faster too.

We’ll have our next reveal about classes at E3, so make sure you don’t miss the show! 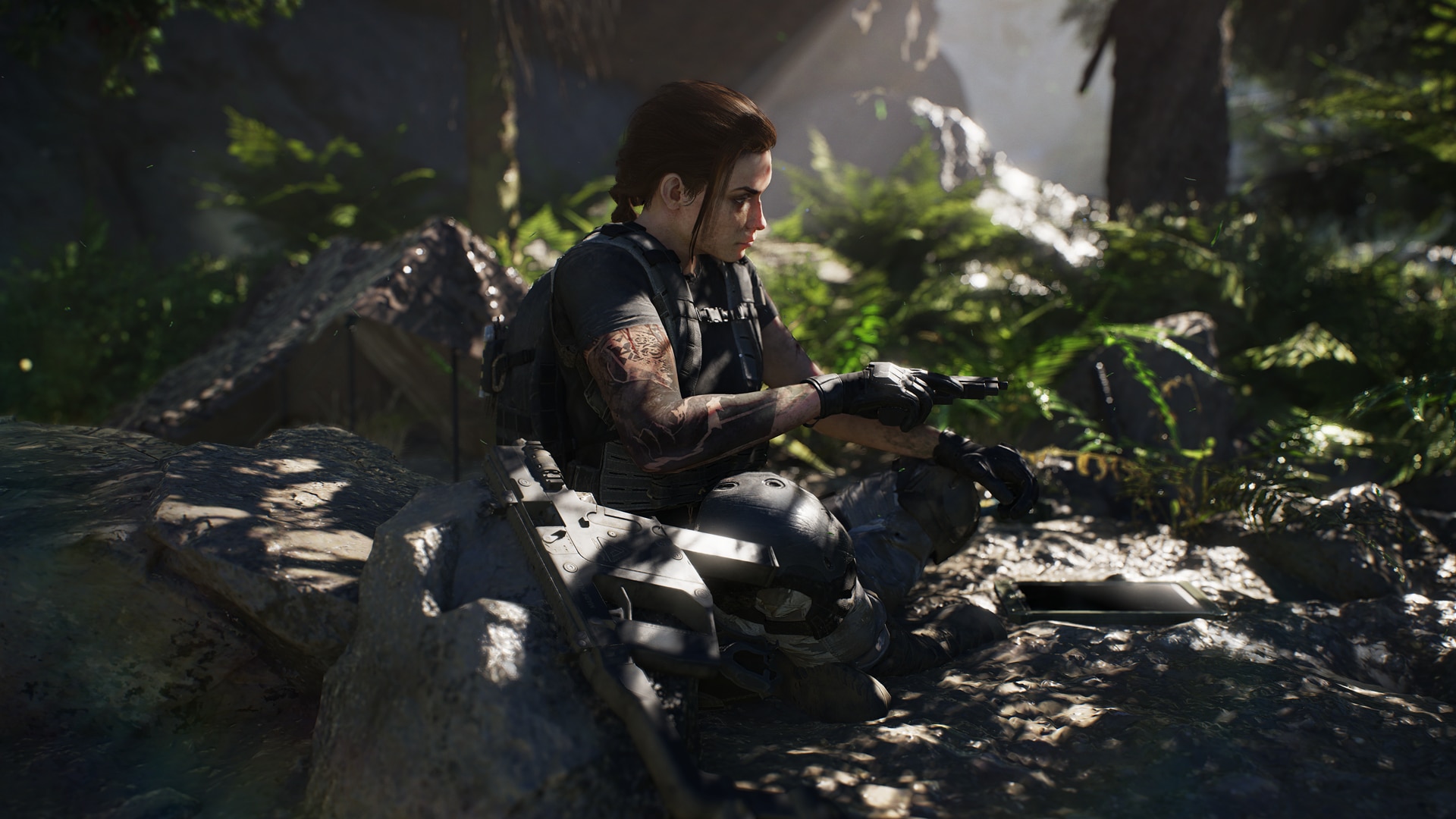 You won’t be locked into your class choice permanently. You and your squad can change your classes at a Bivouac. If you need more firepower, you can pick a class that emphasizes assault. If you want to try more stealth, you could switch to the Panther.

Bivouacs are a safe place to rest and prepare for battle. You’ll find them in various spots spread across Auroa. You can heal yourself, change your class, and do a lot more! We’ll share more about the Bivouac soon.

And we made sure to include one of the biggest community requests, bloused boots!

No matter the difficulty setting, you will have tools to adapt to any situation early in the game. You can use prone camo to hide, carry bodies in stealth and carry your buddy to safety in combat. You can change your class and prep with your squad at the Bivoac.

As you progress, you will be able to unlock passive skills and equippable upgrades that make you a lot more durable in Auroan environments.

Later in the game, the focus will shift from surviving an unfamiliar world towards surviving what your enemies can throw at you by using the best gear, skills, and tactics you’ve mastered while playing.