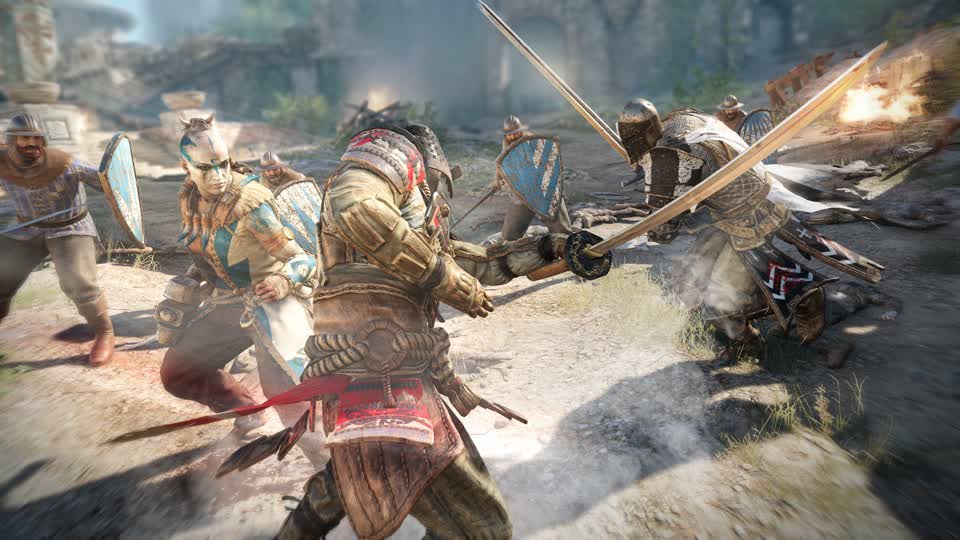 For Y6S3 TU2's Testing Grounds, running from November 17th to November 24th, we will be testing a system level change focusing on the balancing of dodge attacks. These changes are intended to open up the offense in the game by way of rebalancing the risk/reward ratio of dodge attacks.

Let's examine the details of these changes.

As we continue in the direction of improving the overall offensive capabilities of our heroes, we wanted to focus in on defensive dodge attacks.

Right now, the risk/reward balancing of side dodge attacks is such that they are the optimal choice in response to several offensive actions. There is little downside in performing these attacks as you risk getting parried for light damage in favor of constantly disrupting your opponent's offense by forcing them to feint.

This leads to gameplay where players are side dodge attacking without intentionality as they use it in response to most attacks because they feel very safe doing so. This stifles the damage opportunities of those who are on the offensive because now instead of executing their intended attack, they have to adapt to the dodge attack and their damage ceiling is now only light damage.

Our goal here is to reduce the use of side dodge attacks to only those situations where they are the clear counter; so to promote this more intentional use, we are increasing the risk of using them. That way players will only want to execute a side dodge attack when they're sure it will land, otherwise they will be punished for it. We've also reduced the protection of the player in the dodge state to make the dodge itself less safe to use. However, to balance out these changes, we've made side dodge attacks delayable, and dodge iframes activation independent from dodge speed.

We've also made adjustments to the side dodge melee attack. Miss recoveries of these attacks have been lengthened and chaining from these recoveries has been removed to allow for a Guardbreak to land:

Similar to the dodge heavy attack change, this change will also add risk to side dodge melee attacks and promote more skillful and intentional use of these defensive dodge attacks.

To balance out this change, we've also made another adjustment:

All side dodge attacks can now be delayed, in most cases the window being 200ms to 400ms. This benefits players as they get a choice in when they input the attack and allows them to more reliably punish certain attacks as it can land earlier. This also improves input comfort as there is a bigger window for the player to execute the attack.

Now let's look at how we adjusted the dodges themselves.

The first change made to dodges is that the static defense during the dodge has been removed. This means that you can no longer block while dodging. To be clear, only the guard has been removed - you can still deflect and superior block during the dodge. Why did we make this change? From a gameplay perspective this leads to a healthier game as it removes the ability to protect yourself from several attacks at the same time, including an undodgeable, by dodging and blocking in the direction of the undodgeable attack. This allows our orange-blue mixups to work as intended without a single solution to both.

Static defense also gave players a way to defend themselves without iframes. This was necessary given that our iframes were speed dependent, and wouldn't activate when players were dodging in tight spaces, like near walls or in corners. As a result, we've also made the following change:

The final change is to remove the speed dependency on iframes. Instead, they trigger 33ms into the dodge, and last up to 300ms. Therefore, you will always get your iframes, regardless of your positioning on the map, and you don't need to rely on blocking in this situation anymore.

This rebalancing of dodge attacks involves changing a lot of data - as a result it's possible that some bugs may be present. If you notice any issues, please let us know about it as we will look into all the reports and apply fixes as needed.

As always, we will be looking at all the usual sources for feedback when the Testing Grounds goes live later in Y6S3 TU2. Positive or negative, all feedback is good feedback!

Until then, see you on the battlefield, warriors!