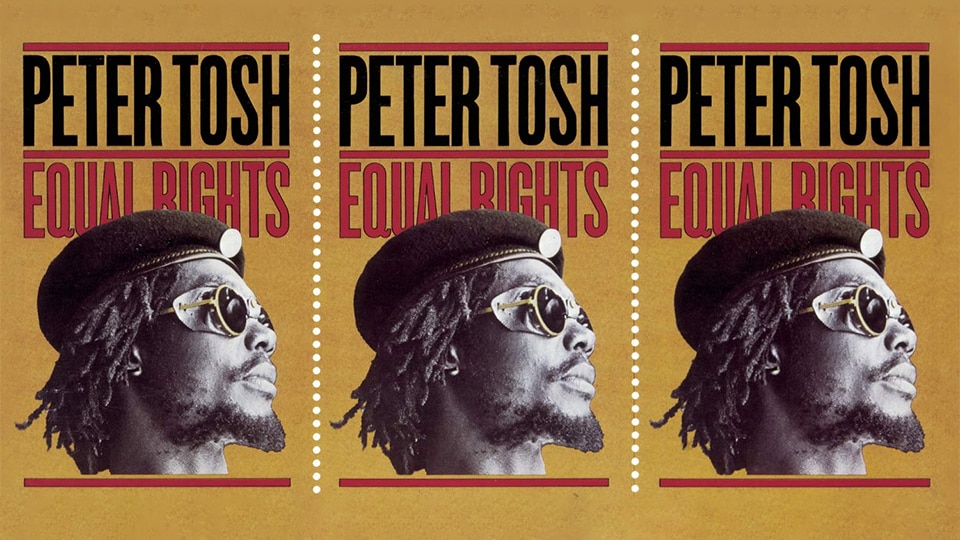 Peter Tosh and, "Downpressor Man," and the Song's Unexpected Journey.

By the time Peter Tosh covered the song "Sinner Man," it had already undergone a profound evolution. From its beginnings as an African American spiritual song, it moved through spiritual revivals, the US folk revival movement, and big band recordings before being codified in its current form by Nina Simone on the album Pastel Blues. When Peter recorded the song for his 1977 album Equal Rights, the title changed to "Downpressor Man," directing the moral of the song – taken from the Book of Exodus – toward the social inequality that persisted in Jamaica after its independence from Great Britain in 1962. The message remains the same, but several distinct changes to the song that reframe it in Rastafarian terms helped Peter speak directly to the social issues in his home country using the weight and history of the spiritual.

No one living knows the original authorship of "Sinner Man" or, for that matter, the authorship of most spirituals, as they were passed on from person to person through an oral tradition. The ramifications of this missing information is more severe than one might assume, as the authorship – and often copyright – of the songs then became attributed to the (usually white) researchers that wrote them down and recorded or published them. Many people cite either Will Holt or Lex Baxter, the first musicians to record the song, as the authors. Others cite the folk ensemble The Weavers as authors of the song, although they recorded it later and would themselves attribute it to an anonymous author. When Nina Simone performed the song (as "Sinnerman") in 1965, she drew on the spiritual music she heard growing up and distilled that energy into over ten minutes of musical reckoning. The silver lining of missing authorial attribution is that each artist can make it their own; each time the song is reinterpreted it takes on new meaning and importance, using the past to speak to the present.

Nina Simone's version of "Sinner Man" has been sampled in recent years by the likes of Talib Kweli and Timbaland. In each instance, the song's history informs how it speaks to the current moment.

Peter's rendition of the song has a lot in common with Nina's version, but key differences show how Peter adapted the song to say what he needed it to say. In fact, there were two versions; one recorded with the Wailers in 1971 and one recorded for Equal Rights; both featured subtle but important changes to the lyrics that made Peter's versions distinctly his.

The most compelling change to the lyrics in "Downpressor Man" is the change in perspective from first- to third-person. In earlier recordings, the song retained its more introspective take on sin, speaking about one individual's personal sins and relating them to their consequences using phrases like "I ran to the rock" and "I ran to the sea." The connection to oppression as sin is implied; the urgency of Nina's performance communicates it. In Peter's version, the statement is more direct (the term "downpressor" itself comes from a Rastafarian reworking of "oppressor"); "YOU can run to the rock," and "YOU can run to the sea." By changing the perspective of the narrator in the song, the message shifts from the personal to the communal; instead of personal sin, these sins are societal, and outside the self.

In many instances, we are asked to take songs as they are, as the expression of one songwriter to a listener. In the case of "Downpressor Man," Peter Tosh used a well-known song, popularized by musicians that were already fighting for social justice, to make a statement about the political, social, and economic injustices he saw in Jamaica. The complex history of "Sinner Man" and "Downpressor Man" doesn't undercut the message of the song at any point in its history; if anything, it makes the message more potent. Peter's adaptation shows how a cover song can reinvent the message and influence people differently from its inspiration, and it's not the only one. If there's a song with a powerful message, it's worth taking the time to understand where it came from -- especially if it's a cover.