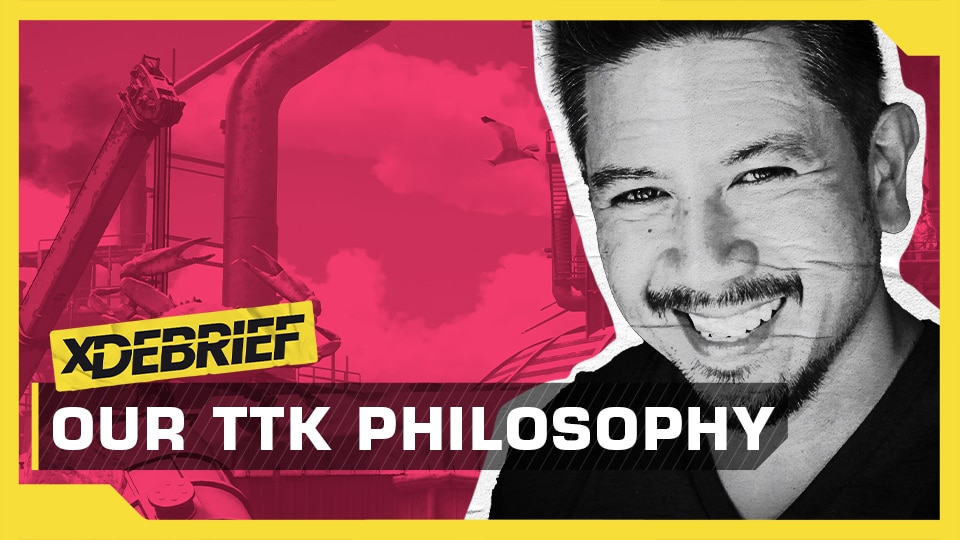 Welcome to XDebrief, a monthly update from the Development Team where we will be discussing the topics and feedback brought up by our community.

For our first Developer Update, Associate Game Director Scott Crisostomo and Executive Producer Mark Rubin take us through one of the most common feedback drivers during the latest Closed Test: Time to Kill (TTK).

So let’s talk about the feedback that we received from the Closed Test and try to break down what our players are saying. We’ll also talk about our philosophy around the TTK for XDefiant and some of the changes that we’ve already made because of your feedback.

Before we start though let’s define what TTK means.

What is Time to Kill?

Simply put, the Time to Kill is how long it takes to kill an enemy player with a specific weapon. Usually, all weapons have a different TTK and also perform differently at various ranges. In general, high TTK games have a different skill set/strategy to win a fight versus a low TTK game. In an actual firefight, there are even more factors that can affect your TTK. Things like whether or not you miss a shot or which part of the body you hit (headshots do extra damage). In XDefiant, players also need to be aware of what abilities are in play in a fight. This is part of what gives the fire fights in XDefiant more depth and we hope to create a larger skill gap for players to progress on.

Let’s talk about the feedback from the Closed Test. There are really two parts to this, actual TTK and perceived TTK.

In regards to perceived TTK, one of the glaring issues that we had during the test was that we didn’t have enough player feedback for players to know when other players were being affected by various abilities. So a player would be shooting at someone and not know they were being healed by another player’s ability or Ultra. So the perceived TTK in that fight would have been really high, often to the point that they would lose the fight and not know why or how much damage they had done to the opposing player.

Fortunately, this is work that we already had scheduled even before the start of Closed Test. So the next time people get a chance to play, they should see a much more clear picture of what is going on in a fire fight. We are planning on testing again so we look forward to the additional feedback we will receive.
As a last note to the Closed Test, we also had some abilities and Ultras that hadn’t been properly balanced yet. And so that exacerbated the problem. This is another thing we are working on for future phases of our development and testing.

The next aspect of TTK to talk about is our current philosophy around unbuffed TTK. So what is our TTK like against players not affected by any player abilities or Ultras? In general, our TTK against an unbuffed player is pretty much on par or maybe just slightly higher than other games in this genre. As an example (as of writing this) the M4 has a TTK around 500ms against a player that isn’t from the Wolves faction or being healed. This is really a very short time. But with player abilities, it does sometimes (assuming a few missed shots) give players a chance to escape from a fight alive. Again, the intent here is to add depth and increase the skill gap so players have room to improve their skills. 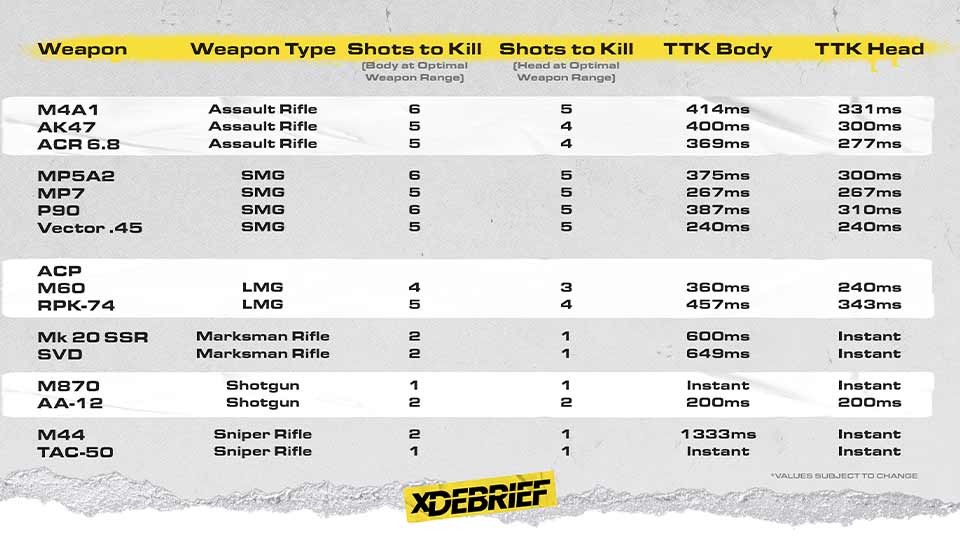 What is next? As always, we want to continue this discussion with you all. All these changes and improvements come, first and foremost, from the feedback you have shared with us. It is key to find the right balance and create the best XDefiant experience possible.

“Keep sending your feedback. We want to evolve this game based on what you say. We want to be transparent on how we’re addressing your concerns and make a great game for you. We are not making this game just for ourselves.” – Scott Crisostomo

Stay tuned for our next Dev Blog on Matchmaking coming on November, share with us any questions you have on the topic using Discord or Reddit!