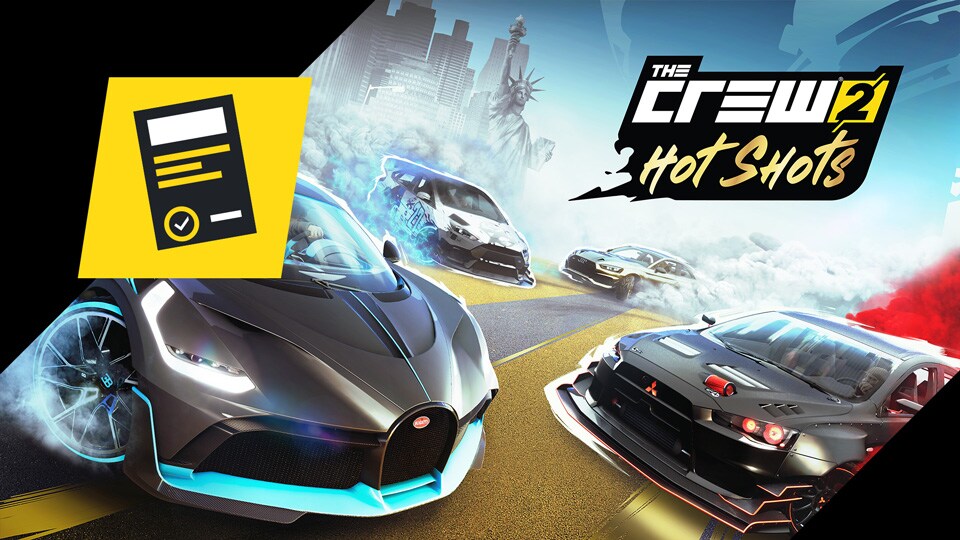 Along with the release of The Crew® 2 Hot Shots, we are introducing new improvements and fixes to your game experience. Check out our patch notes below for the most notable changes.

This patch will be deployed on April 24th at 12:30pm Paris time on all platforms, after a short maintenance of our servers, and will be automatically downloaded when live. Please follow our official channels for the latest information.

o Far & Beyond Shop through a weekly rotation of content on dedicated “Vanity” section.

• [IMPROVED] Various Fast-Fav improvements.
• [FIXED] Player may falls out of world border after switching from plane to car from specific camera angle.

• [ADDED] Players can use Spare Parts combined with bucks to recaliber the affixes on their existing Performance Parts.
• [ADDED] Players are also able to purchase Spare parts in the Far & Beyond shop in the packs section.
• [FIXED] Inconsistencies in affix values.

• [ADDED] Quick messaging feature: easily communicate with surrounding players with this new feature (accessible through the D-Pad Down button)

• [ADDED] Player may remain stuck under the ground in the house after switching his favorite boat to a large one.
• [ADDED] Parked cars trigger an alarm when being hit by the player.
• [FIXED] Unable to hear rain audio in game.
• [IMPROVED] Reworked engine sound for the Nissan Skyline R34 (Street and Drift Edition).
• [FIXED] Double tune engine sounds on high RPM for Bugatti Chiron and Audi RS5.

• [ADDED] 13 new events to be unlocked in PVE progression after their appearance in Live Summit rotation (1 per week).

o [A] A TOUR WITH ALEXIS - GOLDEN HILLS

o [TC] GOING BACK TO MY ROOTS

o [RIVAL] THE KEYS TO THE CITY

o Loot spawned outside of reach

o Disconnection after picking a crate

• [IMPROVED] Improved Back On Track positioning on several events:

o [A] A TOUR WITH ALEXIS - CALIFORNIA

o [JS] GO AGAINST THE FLOW

o [A] A TOUR WITH ALEXIS: FLORIDA