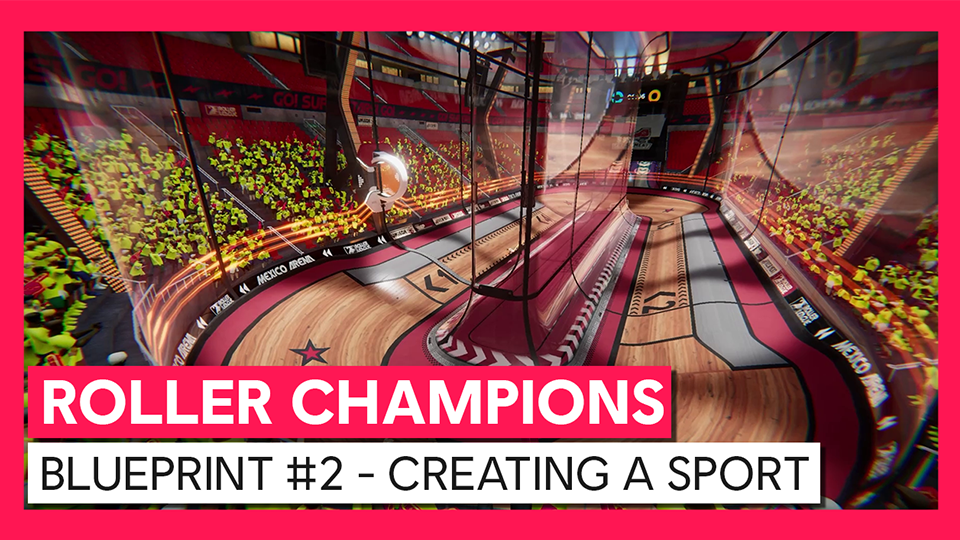 Roller Champions is a new sport, one that exists within a video game. What goes into doing something as crazy as creating a new sport from scratch?

We asked the development team to find out the answers.

“The invention of basketball was not an accident. It was developed to meet a need.” – James Naismith, inventor of basketball

We asked Creative Director Gauthier Malou what need Roller Champions meets. “Really, we wanted to make a gladiator-style game, but without violence – as it would meet the need for ‘sports as a spectacle.’” So the origins of Roller Champions may lie closer to the Roman Colosseum than the high school gyms of Indiana.

Roller Champions is, of course, a video game, which allows for much more flexibility than Naismith had when inventing basketball. Roller Champions is also meant to evolve, established sports don’t change much, but we’re making a game and that opens up a lot of possibilities.

Building Momentum and Mastering the Rink

One key area for that experimentation has been momentum.

Momentum is a seemingly simple principle that is more complex to change in practice. “Physics, level design, game rules…each time you change one it has an impact on the others,” says Gauthier.

Roller Champions encourages players to always keep moving, but an understanding of movement is crucial to using your speed effectively. Climbing the walls of the rinks, hitching a ride from a nearby friend, and finding space at the right moment all require skill to pull off successfully.

Though pinball may not be the first activity you’d compare to Roller Champions, understanding the momentum of the ball and the effect of gravity plays a huge role. “The feeling of being ‘in the zone’ in pinball comes from understanding the physics of the pinball machine.”

Understanding how to use the rink will play a crucial role in winning matches of Roller Champions. “When you climb, you are vulnerable, but you store energy. When you descend, you exchange that energy for speed “, says Gauthier Malou.

In Roller Champions, attack and defense should always balance each other on the scale of each match. “In previous live phases, we saw that players enjoyed the high speed they could pick up at the top of the wall,” says Game Designer Marc-André Bouchard. “However, for the defensive players, it could feel overwhelming.”

Hence, the Uppercut move was created. “The Uppercut gave defensive players a tool to intercept their aerial opponents but also to quickly create speed for themselves.” It’s a delicate balance, but we want the gameplay to be fun both with and without the ball.

Similarly, “The Stagger was created to balance risk and reward for defense” per Marc-André. When an opponent dashes into a player with the ball, and the hit is a near miss, they become Staggered. They are dispossessed and lose their speed but are not knocked down. This provides a reward for the defense without removing the offensive player’s ability to get involved again.

In addition to the game balance, there are also the aesthetic considerations: “We want our players to feel like Gladiators – with the arena, their fans in the bleachers cheering for them.’” Both the intention of creating a spectacle and the physical feeling of the sport are huge elements of creating Roller Champions.

“We’re designing Roller Champions to give each of player the same abilities - it’s not about the character you play, but about the skill of each individual player. It is about making it so every player can express him/herself and underline their personality”, says Gauthier.

In other words, players are all equal when they start the game, and they remain so until they show their identity through their playstyle.

For this reason, communication and team play are key. We can see moments like those in professional sports, where an individual player who’s really good but not a “team player” can hurt their own team, or a player can quietly make their whole team better with subtle contributions.

Roller Champions will release in Early 2021, follow us on Twitter and join our Discord to stay updated on all gameplay changes!