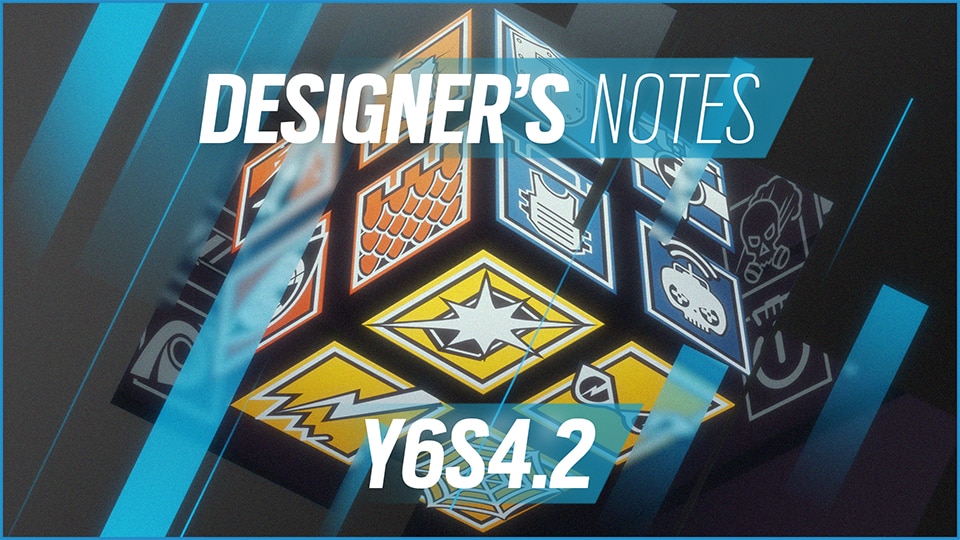 In this latest edition of Designer’s Notes, we'll go into more detail about the balancing changes that’ll come with High Calibre's mid-season update and give you an insight into the reasons behind these changes.

For more information on all the updates, changes and content that was released with High Calibre, check out the seasonal patch notes here. 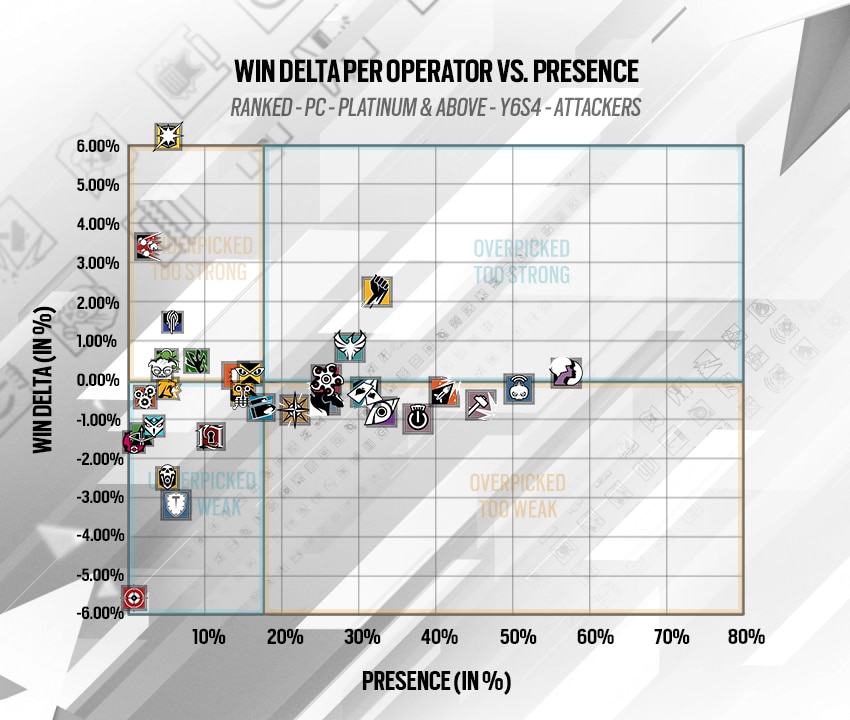 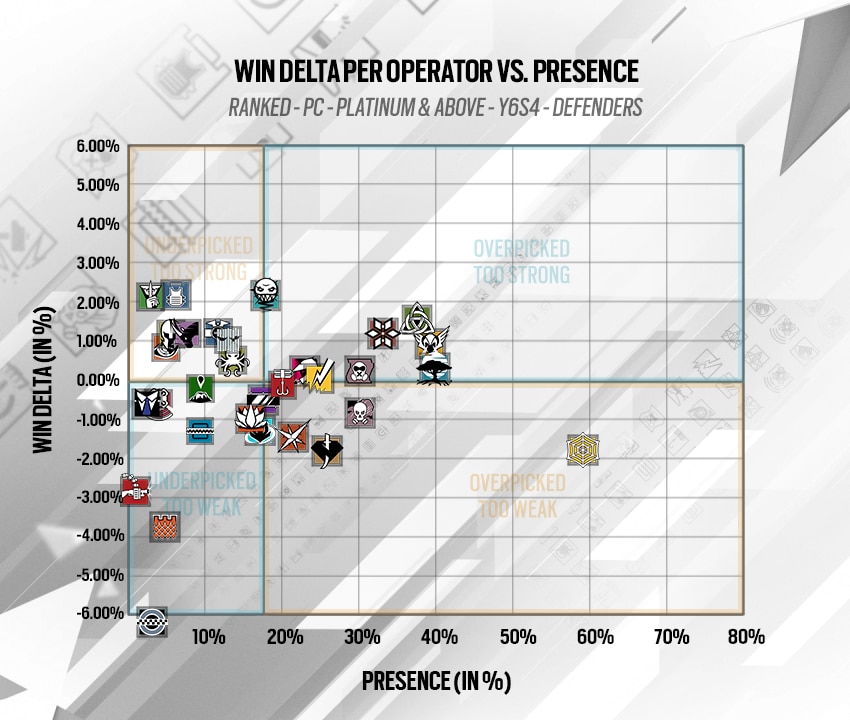 Please note that we are using presence to gauge the popularity of an Operator. This notion had to be introduced to reflect the implementation of the pick & ban.
Presence definition: pick rate of an Operator when not banned. Win Delta: The Win Delta is aggregated from Operator’s Win Deltas per Bomb Site. 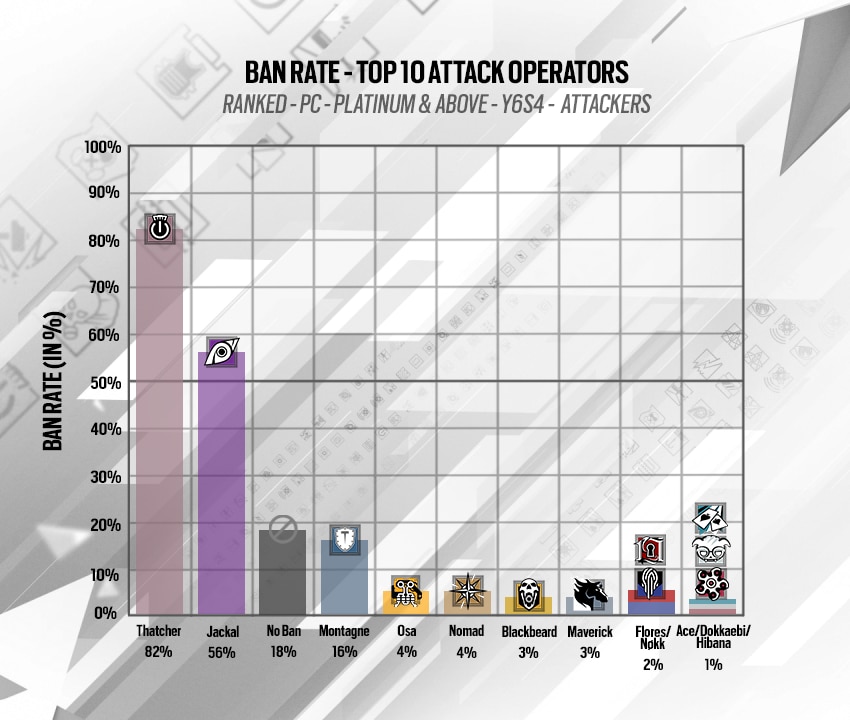 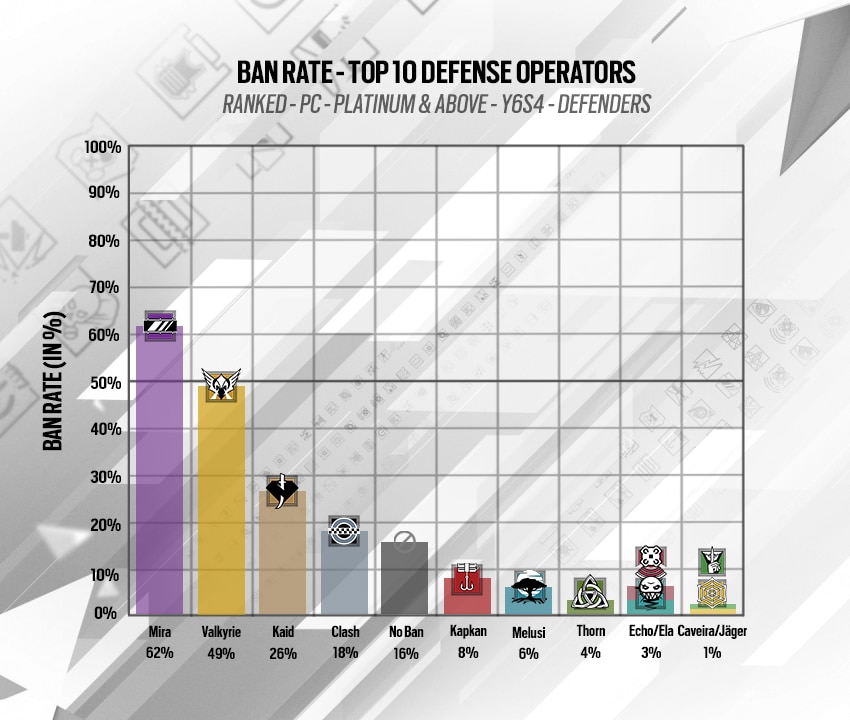 A NOTE ON SIX INVITATIONAL 2022

You may notice that this update's Designer's Notes are shorter than usual. With Six Invitational 2022 coming up quickly, we want to be careful about making changes that could cause major shifts in the meta so close to the event. We think balance is in a good place right now and want to take this moment to observe how it sits with our Pro scene, and use that intel to help guide future changes.

In the meantime, we've made some adjustments we've had in mind for quite some time and have plans in place for post-SI22 balancing changes that we can't wait to share soon!

Population targeted by this change: Casual and Top Ranked.
More choice is typically a good thing, so we regularly evaluate which weapon attachments different operators have access to and make adjustments as needed. One case that stood out to us was Aruni and her Mk 14 EBR, since hers only had one barrel attachment compared to its other owner, Dokkaebi, who has three. This is because prior to Aruni's release, there were concerns that a DMR with recoil stabilization would be too strong for a Defender. After watching her performance on Live and comparing the Mk 14 to the P10-Roni (which out-paces it), we made the decision to give her more options and add the Muzzle Brake to her kit.

While we feel she's in a largely solid place, she could still benefit from a slight buff. This added attachment choice will help tame the initial kick of her shots, giving her a little nudge in fragging potential, while creating more consistency between our two Mk 14 users. Given its usefulness for newer players who are learning Siege and could use the recoil reduction, we have also made this the default barrel attachment on the Mk 14.

It's little surprise that 3-speed operators with shotguns can be a force to be reckoned with in the right hands, but we've found that this is even more true on console with players using controllers. Between its power, Ela's speed, and a forgiving spread, the FO-12 can be a frustrating weapon to come up against on console, so we've tweaked its damage values on all platforms. We expect it will still be powerful in up-close scenarios as intended, but will be less oppressive and dominant in console settings.

In addition to this, we also reduced the damage modifier of the FO-12's Extended Barrel attachment to make it consistent with all other weapons in the game. While this is a slight nerf to where Ela currently is, it should be barely noticeable. Why make this change then? Similar to the change to damage drop-off and Silencers in Y6S3, we want attachments to behave consistently between guns, so this change will bring the FO-12's Extended Barrel in line with other weapons.

We've talked before about how some gameplay mechanics create more frustrating than they need to. It factored into the decision to reduce the effect of screen shakes and plays a similar role here. Slowing players' movement when they've been hit with Ela's Grzmot Mine or Zofia's KS79 often feels like a rolling snowball as players receive multiple inconveniences all at once. This can feel like you're left as a sitting duck.

To limit this frustration and give affected players a fighting chance to react, we've made the decision to remove the speed reduction associated with their concussion effects. Of course, they will still retain all their other effects which we feel will continue to be valuable in trapping scenarios, especially their ability to interrupt actions. While we know this will sting for Ela and Zofia mains, we don't expect it to be as significant of a change as it might feel at first glance, especially given both of them have a slightly above average win delta.