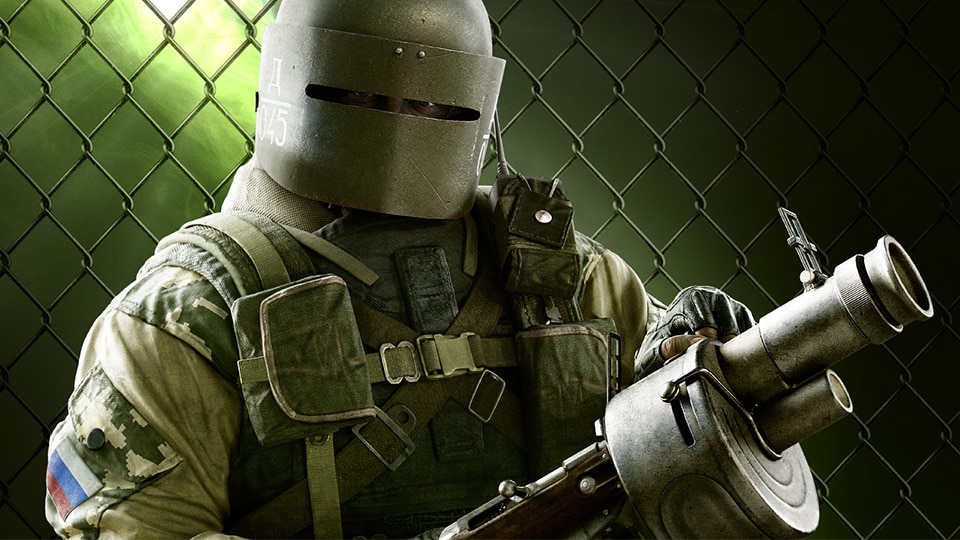 That’s why he has traded his beloved turret to create an all-new way of moving. We have given our trusty Operator a fresh spin through a new gadget, a new primary weapon as well as a new ability in a conscious effort to transform a popular personality into a force to be reckoned with. Don’t worry, Tachanka has kept his spirit, he just got brand-new toys to play with!

“The Shumikha is capable of launching multiple incendiary projectiles that, like Tachanka, are equipped with very short fuses…”

Tachanka’s new gadget, the Shumikha Launcher, is perfect for area denial and for covering unfavorable angles. Its heavy incendiary grenades can bounce multiple times, and their fuse timer only starts after the first bounce, giving them a lot of versatility.

With the launcher, we’re aiming to introduce an easy-to-use gadget that you’ll need great practice to properly master. As an alternative to Smoke’s Grenades, Tachanka’s Launcher can react faster to enemy push by covering more than one angle and benefitting from a high rate of fire.

Tachanka is equipped with 10 grenades at the beginning of a match and the Launcher can hold up to 5. For maximum effectiveness, use several grenades together to cover a wider area and prevent your opponents from avoiding them. Once launched, you’ll only be able to reload one at a time. Make sure to choose that moment wisely.

The team’s intention in giving Tachanka a rework was to turn him into a more reliable competitor, while keeping the spirit of what makes him such a beloved character. With that in mind we have taken his LMG, previously mounted on the old turret, and transformed it into a primary weapon option.

A weapon with a low rate of fire, the DP27 can break rotation holes on soft walls. This places Tachanka into a critical position, as he can remodel defense points and create his own angles to launch his grenades. This is a powerful weapon that will have the attackers on the lookout!