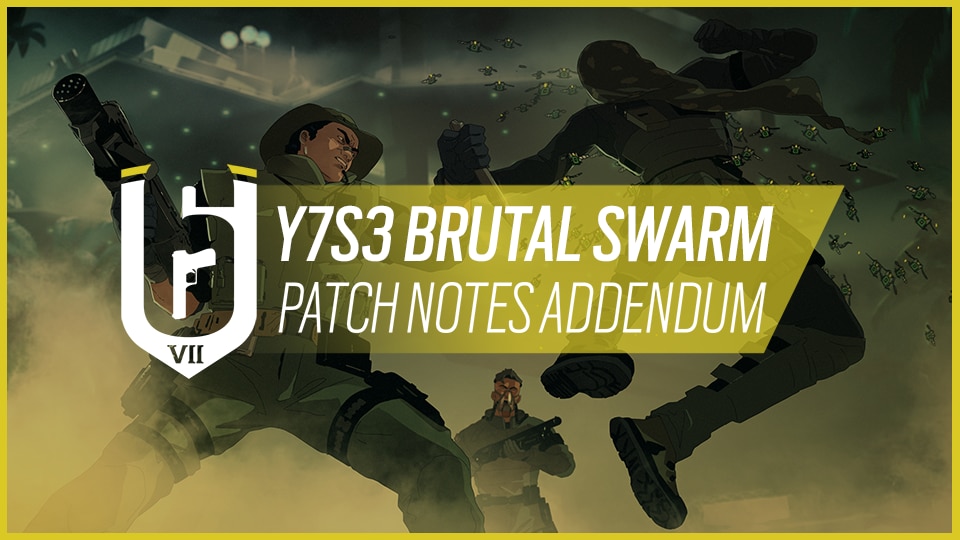 You can find here the updates and fixes made over the course of the Y7S3 Season Test Server. For the full Brutal Swarm Patch Notes, follow the link below:

A larger download will be required for Y7S3 due to a data consolidation. This is to save disk space and reduce overall build size.

FIXED - Thermite's Exothermic Charge only destroys the metal part of a reinforced wall.

FIXED - Shotgun rounds are invisible if a player reloads with 1 round left and fires the shotgun at the same time.

FIXED - An Operator's gadget automatically activates after swapping from their gadget to their ability and then back.

FIXED - Some gadgets have no collision with the hostage.

FIXED - While crouch-walking, the Operator slows down when the controller stick-input is within a certain range.

FIXED - Defenders can still shoot with the Bulletproof Camera while Dokkaebi is hacking the Defenders' Observation Tools.

FIXED - Meleed barricades on Clubhouse map don't always appear destroyed for some players after an Attacker has repelled through them.

FIXED - Operators can shoot through indestructible windows on Villa map.

FIXED - An Operator's left knee clips through an equipped Ballistic Shield when looking around.

FIXED - Montagne can't pick up or drop the defuser while Le Roc Shield is extended.

FIXED - IQ's shoulder is displaced when activating the Electronics Detector.

FIXED - Observation Tools hacked by Dokkaebi aren't deactivated by Thatcher's EMP Grenade when an Attacker is using them.

FIXED - Ying's Candelas are marked with a generic ping instead of a contextual one.

FIXED - Bandit's Shock Wire can't be deployed on a reinforced wall if Melusi's Banshee or Goyo's Vulcán Canister is deployed in the center.

FIXED - The activation sequence of Ela's Grzmot Mine doesn't reset after being deactivated by Thatcher's EMP Grenade.

FIXED - Mute receives score points when Blitz goes within range of a Signal Disruptor after activating a flash charge on the G52-Tactical Shield.

FIXED - Pinging Iana's Gemini Replicator produces a generic ping instead of a contextual one.

FIXED - Grim's Kawan bots have different sizes depending on the set Field of View.

FIXED - Iana can control the Gemini Replicator from the Drone POV when deploying both of them in quick succession.

FIXED - Grim's Kawan Hive Launcher has a delayed launch when double tapping the firing button with the launcher equipped.

FIXED - Nomad's Airjab reload animation is incorrect when a grip is equipped to her weapon.

FIXED - Glaz's Flip Sight is not aligned with the iron sight of the OTS-03 weapon.

FIXED - The suffix of a player's nickname won't load correctly if they reboot the game while reconnecting to a match.

FIXED - Incorrect voice lines are played when Operators are hit by friendly fire.

FIXED - Camera gets stuck when spectating a match if the spectated Operator or drone is eliminated or destroyed.

FIXED - Visual issues in the Home section and Operator Showcase.

FIXED - The After Action Report is not displaying the intended animation.

FIXED - Operator icons overlap when viewing someone else's perspective as a Spectator.

FIXED - The warning message is missing from the confirmation panel when activating any type of Booster.

FIXED - Players are unable to use voice and text chat while in the lobby of an Online Custom Game.