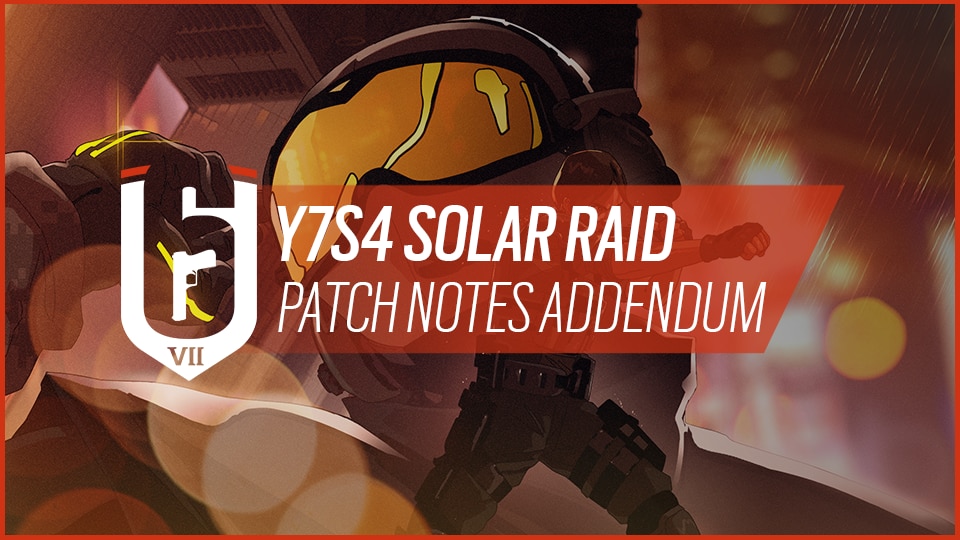 You can find here the updates and fixes made over the course of the Y7S4 Season Test Server. For the full Operation Solar Raid Patch Notes, follow the link below.

FIXED - Electricity VFX is not visible on Deployable Shields or reinforced walls and hatches.

FIXED - Operator remains stuck inside the garbage bin when exiting rappel above it at EXT Front Yard on Chalet map.

FIXED - Operators' legs twitch when shown in the MVP screen.

FIXED - Exit Rappel option appears in some locations where it can't normally be used.

FIXED - Leaning back and forth while aiming down sight is faster while rappeling.

FIXED - An extra bullet is fired and not subtracted from the ammo pool when shooting before the reload animation is finished.

FIXED - Defenders are undetected in a specific area outside on Clubhouse map.

FIXED - Attackers can reach the top of the skylight after vaulting on Osa's Talon-8 on Villa map.

FIXED - Operators can fall through the map at EXT Zodiac on Yacht map.

FIXED - The LFP586 Revolver has 7 bullets instead of 6 after reloading.

FIXED - "MAX" indicator is not displayed in Solis' Spec-IO Electro-Sensor when 5 or more devices are detected at the same time.

FIXED - Solis' primary weapon is equipped while holding a gadget when Spec-IO's cooldown runs out.

FIXED - Several Operators are not revealed when pinging or scanning their in-use devices with Solis' Spec-IO Electro-Sensor.

FIXED - Jackal's Eyenox can be pinged by Solis' Spec-IO even when the device isn't in the identification area.

FIXED - Incorrect animation when Solis is affected by an EMP while Spec-IO Electro Sensor is activate.

FIXED - The second charge of Ace's S.E.L.M.A. can destroy part of a wall that is jammed by Mute's Signal Disruptor.

FIXED - Assist score is unavailable for IQ's Electronics Detector after scanning Pulse or Vigil's abilities before they're eliminated.

FIXED - Both bombs are not revealed at the same time with IQ'S Electronics Detector.

FIXED - Jackal's Eyenox doesn't reactivate on the first try after a concussion state with the device activated.

FIXED - Doc's voice lines are missing when using the Stim Pistol on himself or other players.

FIXED - Animation is canceled when trying to go through a hatch as Oryx while Dokkaebi's Logic Bomb is active.

FIXED - In-game keyboard functionality is lost after opening and closing the Ubisoft Connect overlay when Raw input is on.

FIXED - When using the Hide Other Players Privacy option, reporting other players reveals their real username, but the notification message still uses the NATO phonetic alphabet.

FIXED - Weapon skins accessed via News are sometimes showcased on secondary weapons instead of primary.

FIXED - Hip fire recoil on Shooting Range does not match the recoil in PVP games.

FIXED - Scramble VFX is missing when switching to or between Observation Tools.