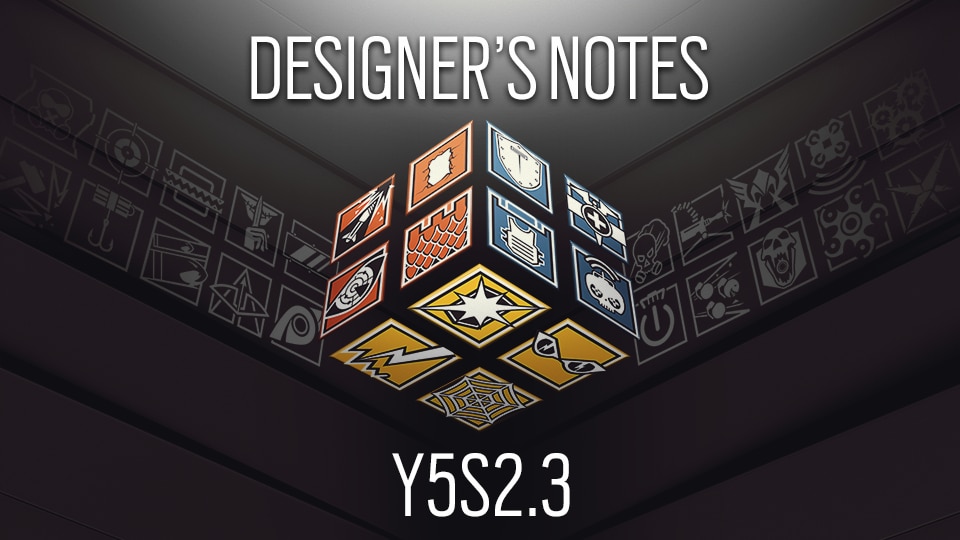 In this latest edition of Designer’s Notes, we'll go into more detail about the balancing changes that’ll come with the 2.3 patch and give you an insight into the reasons behind these changes. We'll also take a look back at the previous changes detailed in the Y5S2 Designer's Notes and the impact they had on several of the operators. 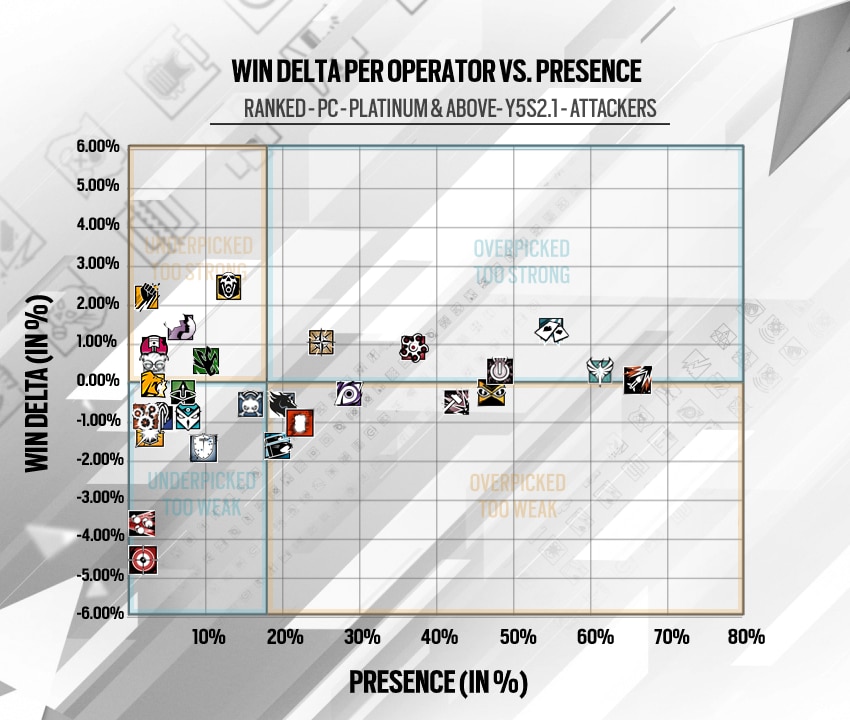 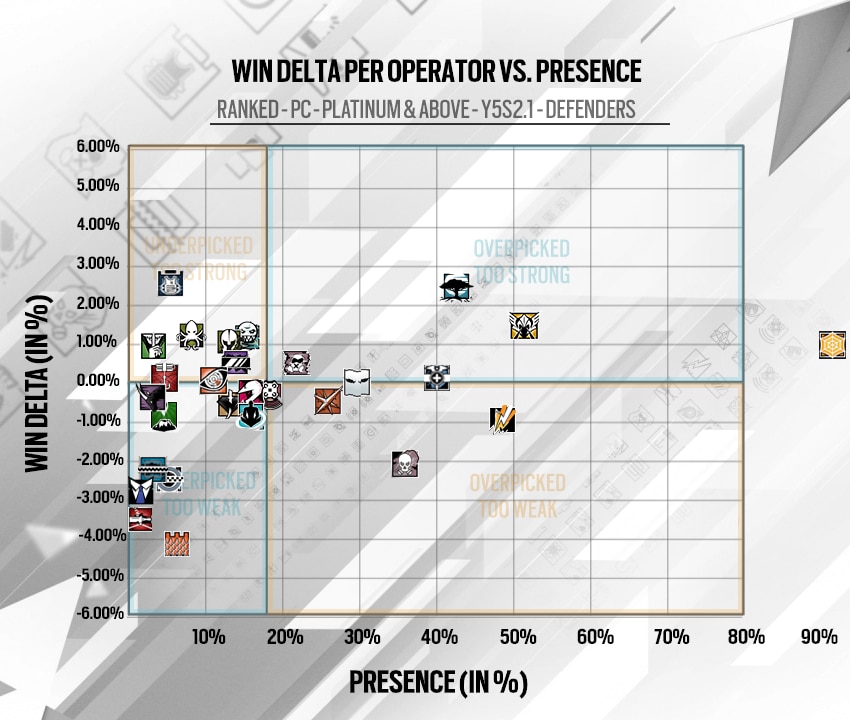 Presence definition: pick rate of an Operator when not banned.
Win Delta: The Win Delta is aggregated from Operator’s Win Deltas per Bomb Site. 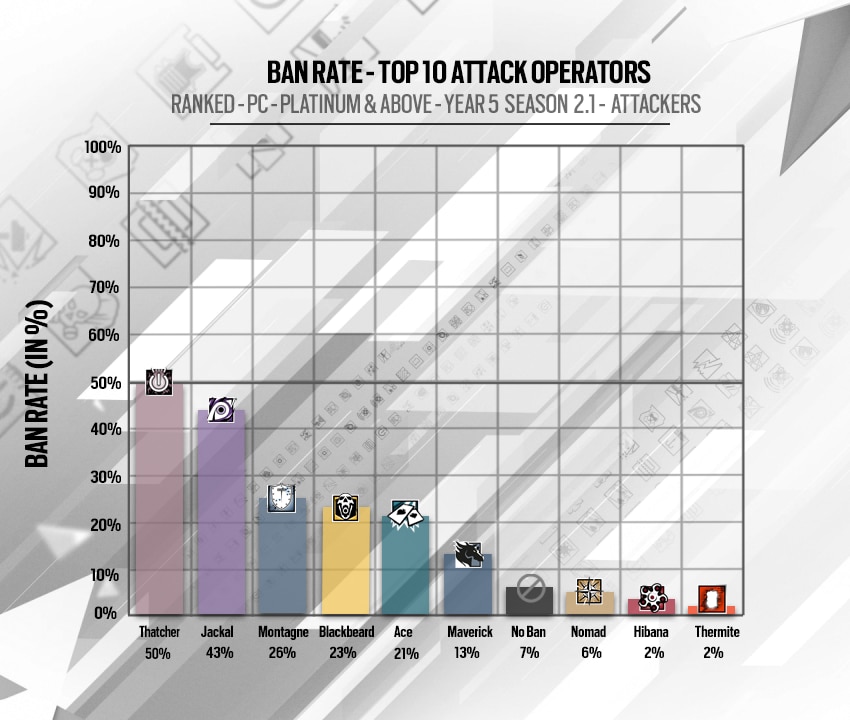 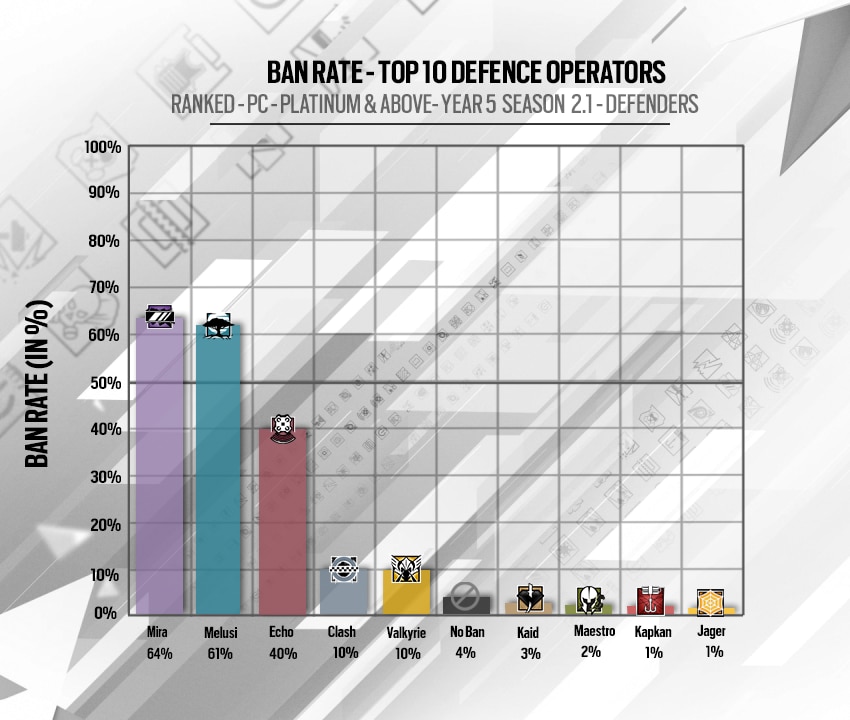 We are investigating several ways to look into increasing Fuze's presence and usefulness. After looking into his overall performance, we noticed that the number of uses of his charges is fairly low. (Below 2 charges per round on average).

We suppose that Fuze mains are trying to optimize their charges and may sometimes be reluctant to deploy them. By increasing the number of Cluster Charges, we would like players to use those resources more aggressively.

Fuze can be quite efficient at destroying bulletproof gadgets deployed on Bomb Sites, given the number of pellets in each charge, he is often able to effectively destroy Defender gadgets, even with the presence of Wamai or Jäger.

By increasing the deployment speed of Gridlock's gadget, we hope to make this gadget a bit more comfortable to use. We do not expect this change to have a significant impact on her Presence or Win Delta.

We were initially thinking about making the deployment even faster. The feedback we gathered pushed us to find a more reasonable middle ground, as it could become quite hard for Defenders to effectively counter the gadget deployment.

We are going to monitor the effect of this change and see if it influences her overall playstyle.

Oryx's Presence is lower than expected. Our goal is to increase his mobility to make him more popular and fun to play, while increasing his survivability.

Our goal is to make Oryx a better Roamer and we are exploring ways to make his ability more efficient in that regard.

The changes detailed in the Y5S2 Designer's Notes had some significant impact on several of the Operators.

Thanks to our data analysts, we are now able to share this information, as well as some of the key learnings from the Y5S2 patch.

Some statistics may have evolved following the Y5S2.1 patch, but this should still provide an overview of the impact of the previous changes.

This Season's changes brought to Amaru have led to some significant improvements, both in terms of Presence and Win Delta. 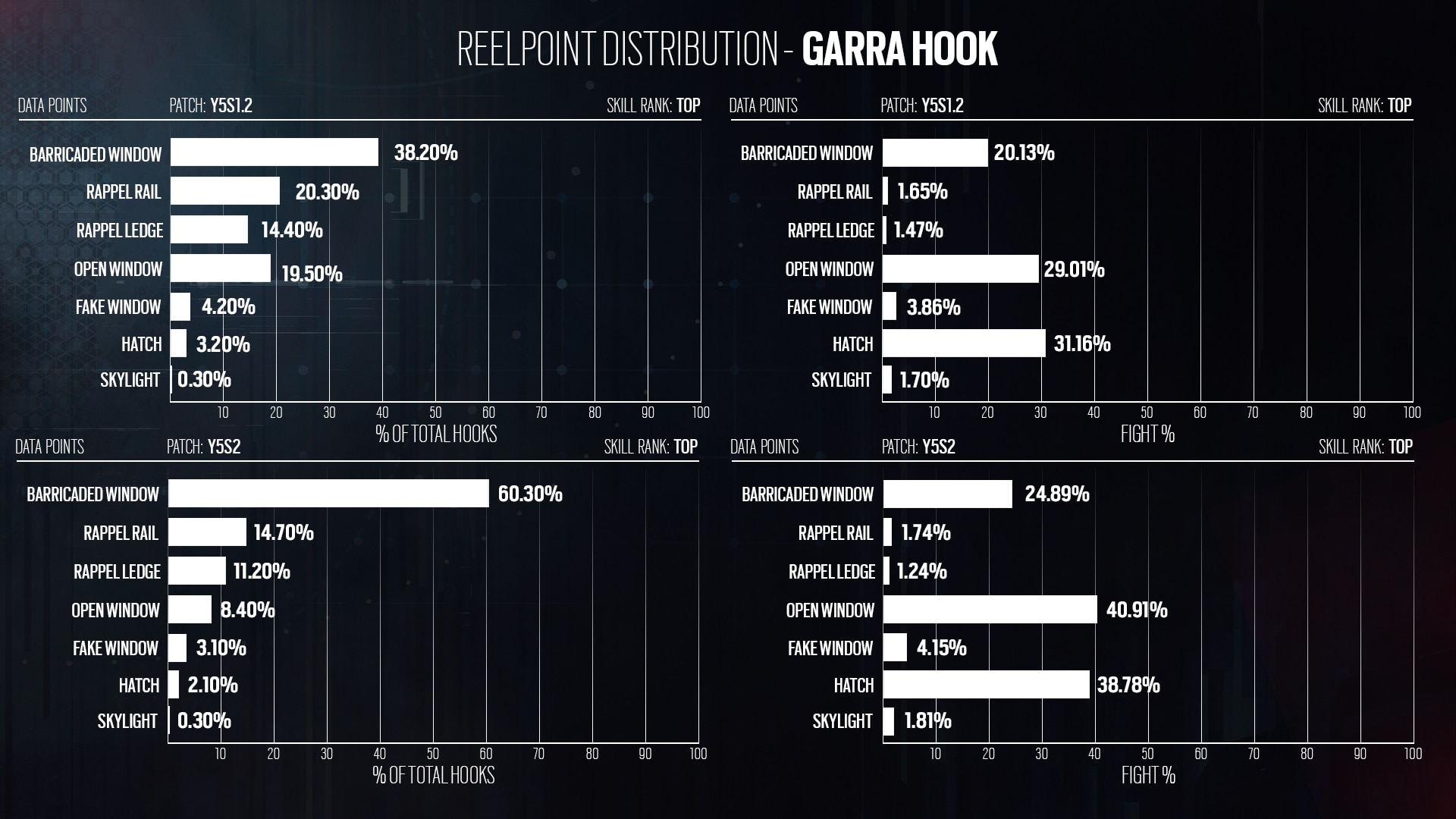 The Graph above is an analysis of the use of the Garra Hook. "Fight%" represents situations when in the 5 seconds following the use of the gadget Amaru entered a fight against a Defender.

The addition of the Angled Grip has provided Oryx players with a stronger option - although it seems this has not been fully accepted amongst the community: The Vertical Grip is still picked 59% of the time. In the current season, Oryx has a slightly higher Win%, 7% higher kills per round, and a better K/D ratio that exceeds 1.0!

It looks like players have responded well to the Remah Dash Damage reduction. At both levels we see significant increases to the number of wall dashes per round (+16% for Top Ranked, and +26% for Casual). We have also seen a nice reduction in rounds during which the Remah Dash is not used. In both Top Ranked and Casual - Regular players did not dash during 22.5% of rounds in Y5S1.2 (down to 17.2% in Y5S2.0).

Oryx has seen solid increases to his Win Delta as a result of these changes, but he still needs more help from -2.3% to -2.0% for Casual players, and from -3.8% to -3.0% for Top Ranked after the changes. His Pick Rate remains low at both levels with 4%.

Y5S2.1 Update: Oryx has an improved Win Delta, moving from -3.0% to -0.2% at the Top level of play but we are still monitoring this - the size of data we have on him this season is relatively low.

Echo players at the Top level have experienced a solid Win Delta increase from (from 0.4% to 0.9%), while his pick rate and win delta for the Casual population haven't moved. Echo is banned much less at Top Ranked (from 68% to 38%) and Casual (from 59% to 37%) levels. The addition of Melusi probably had a direct effect on Echo's ban rate.

Changes brought to Kali's Lance has led to 13% reduction in Lances Destroyed per round at Top Ranked level and a 10% reduction for Casual levels of play. It seems that the fuse time reduction is making it a bit harder for defenders to counter-play, but not overwhelmingly so.

We have noticed a ~10% increase to Gadgets Destroyed per round at both levels due to more Lances detonating successfully. Lances are also used a bit more often than during the previous patch with a 7% increase at both levels of play.

The CSRX 300 recoil reduction is likely a small positive change (although follow-up shots by Kali are much weaker than a first shot).

The number of kills per round with the CSRX is on the decrease, because of the addition of the SPSMG9.