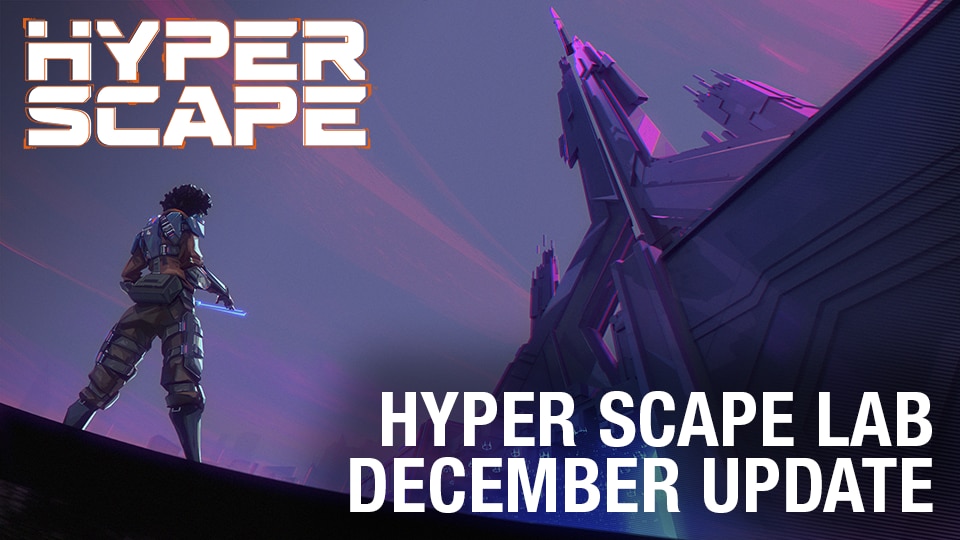 We’ve been very happy with the response we’ve seen to our previous Lab Patch (v2.3), which introduced big new features such as Team Deathmatch, Arcadium Free Roam, new weapon reticles, time-of-day rotation, and more. Those additions are giving us a great base to build upon, and you’ll see in this update some key changes coming to those new modes, as well as some additional improvements to the overall quality of life for our Contenders.

As a quick refresher, the Hyper Scape Lab is what we’re calling this current phase of development where we’ve broken the dev team into autonomous development cells focused creating features and improvements based upon the following areas (one cell per pillar):

DISCLAIMER: As always with game development, all the features and dates mentioned below are subject to change. It might happen that some things take a bit more (or less!) time to be developed and released so we’ll make sure to update you all if that’s the case.

The latest Patch v2.4 (Health Regen speed increase and D-TAP nerf) received positive feedback from the community and seems to have taken us to a state of relative stability after a series of important updates that brought major changes to the game. Of course, there is still some work to do but our team’s perspective is that we don’t have urgent major offenders at the moment, and we can take the time to digest the recent changes before adjusting even more.

Some weapons are still perceived as too strong by certain players but it’s important to mention that overall, most of the old problematic weapons seem to have a reached a form of balance. For example, we don’t plan to change the Komodo or the Hexfire or the Riot One in the near future. They are still strong in the right hands, or very comfortable to use but that’s now the case with most primary weapons. It’s also important to note that the weapon balance is currently pretty different between PC & consoles due to the difference in population.

Aside from fixing issues in the meta, our goal has always been to try to improve the diversity of the weapon meta. Our next focus in term of balance is going to shift toward improving weapons that currently have little impact or generate little interest in the community. Mammoth and Salvo are two weapons in our sights at the moment, although we intend to take the time necessary to improve their behavior and not just play on parameters to boost them. This is also true for hacks, some of them like Reveal need to get some deeper adjustments in order to make them more appealing to the community.

We’ve received a lot of feedback and saw many discussions (sometimes heated, which is nice to prepare for the sweet Canadian winter) around the recent improvements we’ve made to aiming comfort, especially on console. Our take on this is that they are good arguments on both sides of the aim comfort line. Right now our job is to find the right middle ground between accessibility and skill such that Hyper Scape remains true to its lightning fast, high mobility roots that our most dedicated players fell in love with originally, while paving a way for newcomers to come and feel they have a place in our game.

Up to recently, Hyper Scape was hard to play for too many players. The combination of fast-pace navigation, verticality and the capacity to chain abilities to escape or attack made the game unique but also destabilizing to new players and too hard in term of shooting. Many of you persisted and improved their skills a lot, but many felt discouraged. For Hyper Scape to work we had to offer a friendlier and more welcoming environment to ALL player, not only the ones that came for the aiming skill challenge. As we explained already, since we had no intention of changing the unique recipe of Hyper Scape what we needed to do was to make the shooting easier within that recipe, so more players could enjoy it as well. There is a lot of skills to master in Hyper Scape, not just in aiming but in navigation, hacks and tactics. The recent improvements in aiming comfort do not change that.

We know this topic can be divisive but remember that long term all the players that stayed will benefit from the presence of all those new players feeling more welcome in Hyper Scape.

These are highlights of what’s coming in our next update, currently planned for December 10!

As we said in our last Lab Update blog, we are thrilled to bring crossplay to the game in our December 10th update! This is a big step toward bringing our entire community together in the game. We are connecting our PlayStation and Xbox players in this update, while continuing to work on bringing PC into this matchmaking group.

We are excited for what crossplay will bring to the game, in form of faster matchmaking to find a lobby and larger lobbies, so you will have more matches and less waiting!

Here’s how it works:

By default any match you play on Xbox or PlayStation will group the players from these platforms into matchmaking together. But that’s not all, you will also find that your friends from Ubisoft Connect and your current Console will now appear in the Social menu. Allowing you to party up with any of your friends in the same squad, regardless of where they play- even on PC! That’s right, while this update does not put PC players into the combined matchmaking group, it does add the ability for Console friends to play with PC friends in the same squad.

Note: For any squad with at least one PC player in the group, that squad will be placed in the PC-only matchmaking group to keep things fair for all players.

As we mentioned above, our cell’s next focus is to work on bringing our PC players into the general crossplay matchmaking pool with Xbox and PlayStation players as soon as we are able. There are some specific technical hurdles that PC crossplay introduces that aren’t there on Console, thus why we can’t just release them all at the same time. We don’t have an exact date to share for that yet, but it is a top priority for the team and we will be open with our updates on that as soon as we have them. 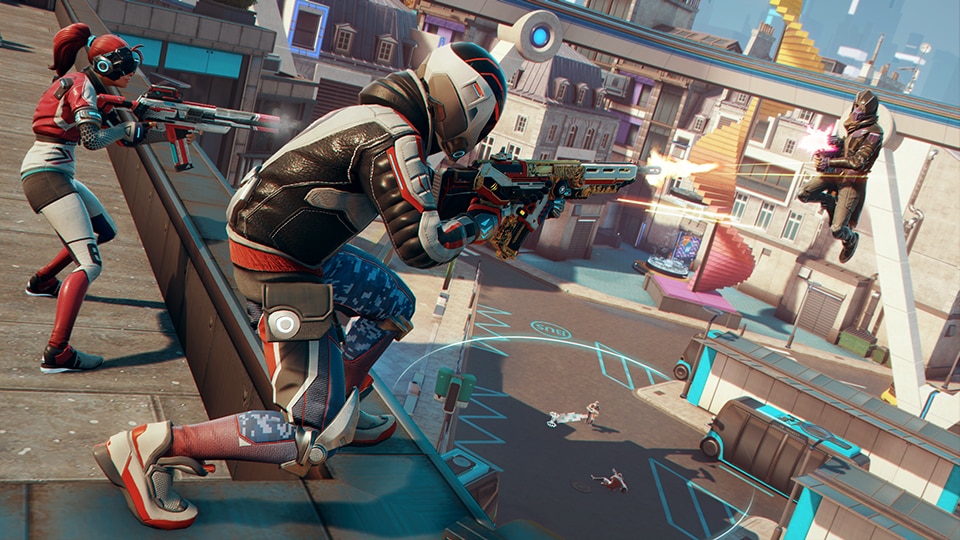 We’re so happy to see our new mode resonate with so many in our community. Thank you to everybody who has been playing it and providing feedback since our last update, it’s crucial in how we grow and improve TDM. Here’s what we’ve got coming for our December 10 update.

Now that we have three TDM maps finished (The Foundry, Hillside, The Depot) we are able to introduce a random rotation into the mode, so players aren’t stuck in the same map over and over. We’re happy to be able to deliver this feature already, as it’s one of the bigger TDM requests from the community so far. We are working on adding new maps in the near future, so stay tuned!

Another common request we saw in days since TDM’s release was for us to increase the kill cap for a match. We’ve done that now, increasing it to 50. We’ve also increased the max match length to 12 minutes, in the case 50 kills is not reached. 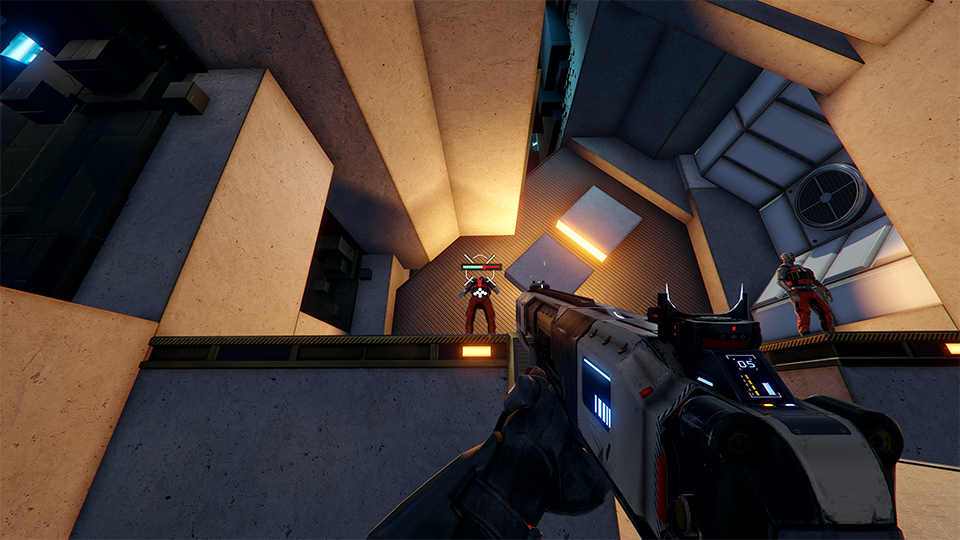 This update brings a big improvement to readability for the Mammoth shotgun. Now players will see where each pellet of their shot lands on their enemy, with critical hits highlighted with red. 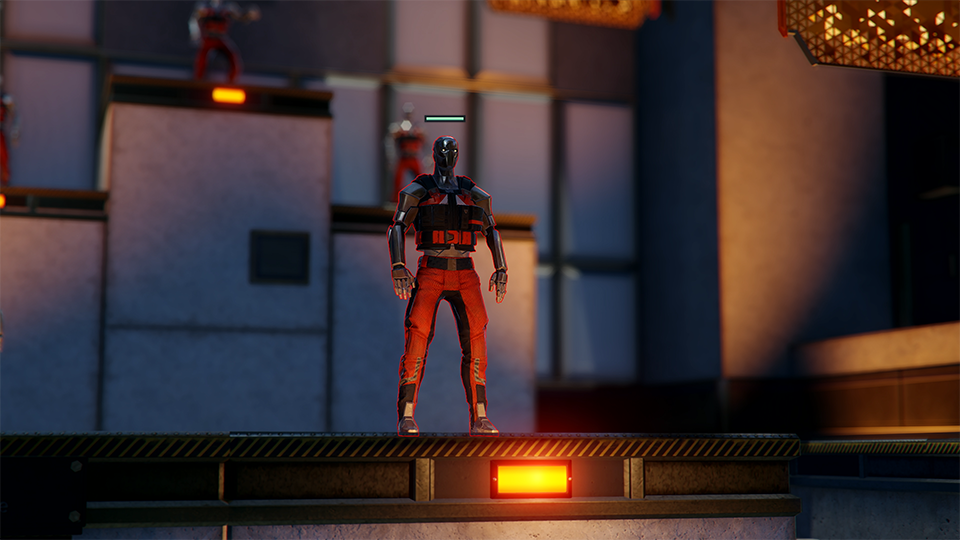 The Health Bar is now one single line, without segments, and whenever you take damage you’ll see a smooth animation show how much damage was incurred in red, before the bar drops.

Last month’s release of our Arcadium free roam mode brought players a chance to fully explore Neo Arcadia and get comfortable with playing in our world. This month we’re adding some improvements to Arcadium to better assist the player in their onboarding.

As one of the key skills to develop to become a better Contender in Hyper Scape is traversal and mobility, we are adding navigation paths marked with pick-up objects to the mode. These activities will require the player to use a combination of hacks and navigation mastery to successfully complete them.

You’ll now find more Drones flying around the map for your targeting practice!

Play Arcadium as a Squad - practice shooting at each other in free roam. 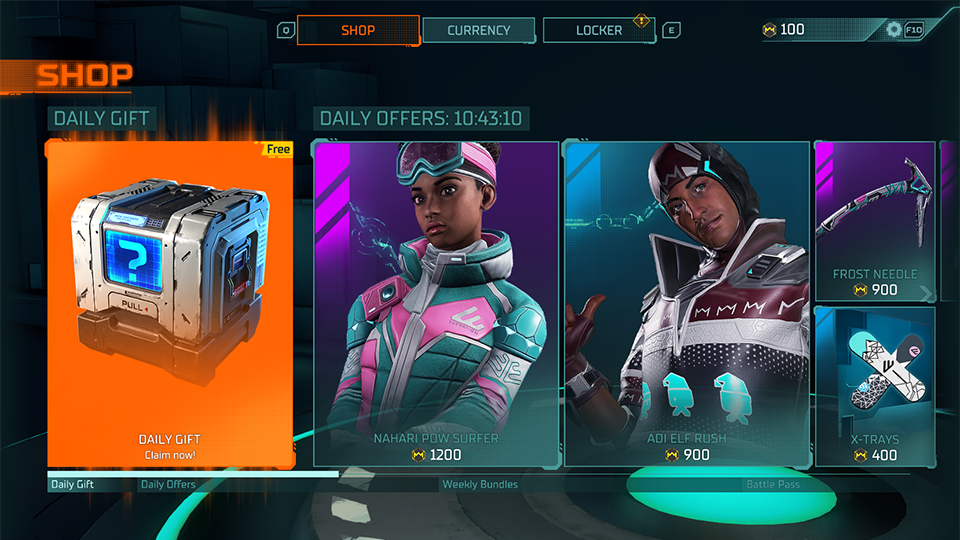 We’ve combined most of the Shop offers into two pages (Shop and Currency), which you simply need to scroll horizontally. Battlepass offer too? Maybe. You’re welcome.

Also when you buy bundles now you can equip the contents of the bundle immediately after. Handy!

We also added a new 'Promotions' screen. For now, it highlights the Season 2 Starter Pack.

This screen displays right after the 'Announcements' one and will appear on your 2nd and subsequent logins.

Why? It makes the purchase easier and more convenient.

Especially because it shows one of our most generous shop offer: Mint Workshop and the shiny 2,875 Bitcrowns that come with it.

Based on your feedback, we also tweaked the "Buy" button behavior. You now have to hold it, in order to buy something.

This should avoid any unwanted purchases because you misclicked a button while browsing our offers.

Thanks and keep the feedback coming!

As you can seem our team has been very hard at work on all of these things, and what’s truly exciting for all of us is we’ve got even more in store for you in the months ahead. We’ll see you on December 10th when all the above updates (and more!) will release! And we still have more updates in store for you in the Hyper Scape Lab series, so stay tuned.