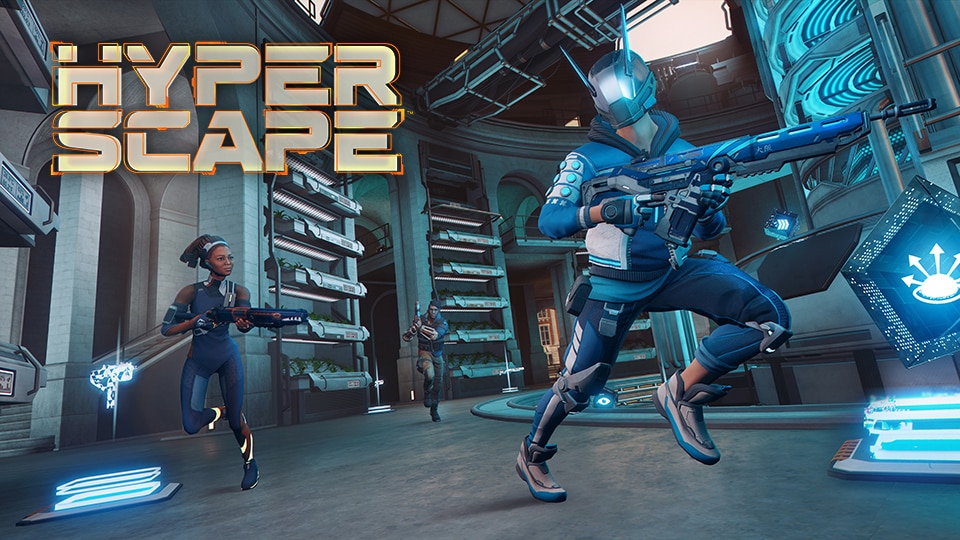 Hello to our PC Open Beta Contenders! We're happy to bring you Patch 0.4, deployed during our first week of Open Beta to address several points of feedback you’ve been asking us about. This patch will bring fixes to multiple bugs & balancing issues encountered since the Technical Test.

As a quick note, we wanted to point out that this is why Open Beta is very important to us, as it gives us a chance to gather and react to your feedback before Hyper Scape’s full release this summer. To that point, this patch would not have been possible without all your questions, comments, and suggestions. Your feedback is crucial, so please keep it coming.

We’re making important changes to the Salvo to address your feedback. We realize the weapon can still be frustrating when encountered indoors in carpet-bombing, or that you feel it does not require enough skill to be efficient.

Salvo will now be a slower, more precise grenade launcher, with reduced pushback on explosion to limit movement impairment. Proximity detonation radius has been reduced, as well as the explosion AoE. Salvo will still be an efficient weapon but will require more aiming skill and timing.

We’ve readjusted the Komodo to increase the skill required to use it efficiently and made changes to prevent point-blank usage – we believe having no friendly fire is an important anti-toxicity element of Hyper Scape but shooting at your own feet should not be an efficient way of damaging other players.

We discovered a bug making the Hexfire too efficient with a controller in certain cases. This has now been fixed. Hexfire now requires the same aiming skills as the other automatic weapons, as intended. See the Key Known Issues section below for more detail on other aiming issues we’re working on.

The Reveal Hack has been reinforced and should be more useful now. It now has a larger detection frustum (yes, to my surprise it’s a word) in term of angle and range.

Reminder: Reveal and Invisibility are respective countermeasures. Reveal can cancel Invisibility, which in return can cancel any Reveal effect (including the one from the Reveal Game Event). The last effect triggered has the last word.

The Mine has seen its popularity and efficiency increase greatly since the beginning of the Open Beta, and we’re making some adjustments to make sure it stays balanced with the rest of the meta.

We’ve reduced Mine Projectile Hit Points so it will be easier to destroy and reduced its acceleration to give players more time to react.

We’ve seen a few ways the Wall can be exploited and we’re making some changes to keep it balanced, while retaining its creative and defensive value.

We’ve increased its Cooldown a bit and reduced each Wall's lifetime duration to unclutter the gameplay space a bit and prevent players from staying on top of them for long time with no effort (hello, snipers).

We’ve made a few minor changes to harmonize balance between hacks.

Supply Crate and Health Kit Game Events have been adjusted to make them more valuable for both Contenders and Viewers. Supply Crates will now be easier to find, and the Health Kits will give you more health.

We’ve monitored Showdown strategies & certain exploits closely during the first days of Open Beta and realized that the changes we made for patch 0.3 we’re not as effective as we planned, largely due to a bug that is now fixed but also for balancing reasons. We’re making more adjustments to Showdown & Crown, and Sector Decay Damage in general. For patch 0.4 the damage multiplier of collapsed sectors during Showdown will be increased again. We also fixed a bug that was cancelling that damage multiplier in certain cases. The Cooldown penalty for Crown Bearer will also be slightly increased.

We are looking into more changes & fixes for Showdown, but these modifications should already bring noticeable improvements to your experience.

Finally, Sector Decay Damage will be increased a bit overall, as we felt it was slightly too forgiving.

We’ve fixed an issue on the Threat Ping. Both Generic Threat Ping (on location) & Enemy Threat Ping (directly on an enemy) duration had different timings and were too long, so we’ve harmonized them. This should provide a less Ping-cluttered environment, and more up-to-date threat info.

For full list of currently Known Issues head to our Community Trello.