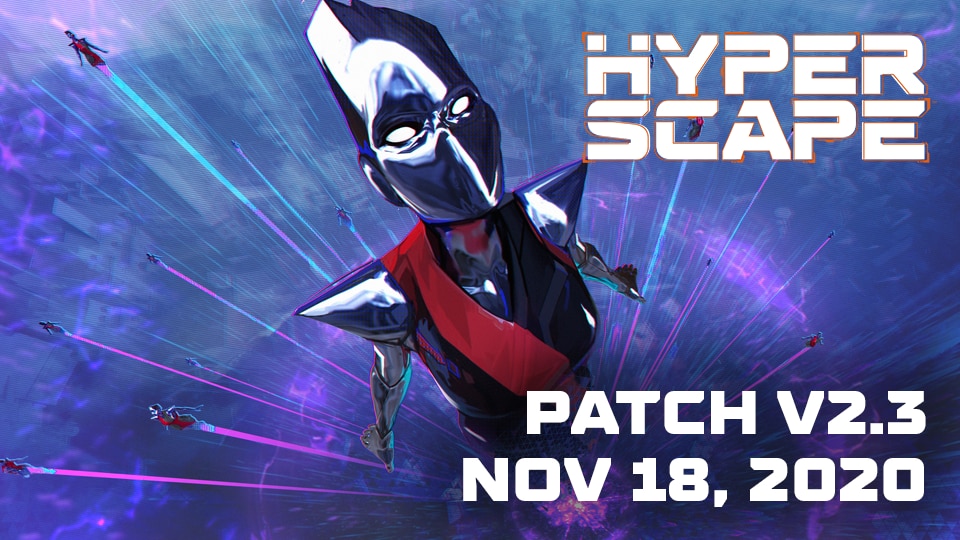 Patch 2.3 introduces several major new features to Hyper Scape as well as a series of improvement to combat comfort. As we explained recently, we are now in the Hyper Scape Lab phase of the Season 2, and we are going to let our players experience certain features while they are still in beta, to gather feedback from our community. 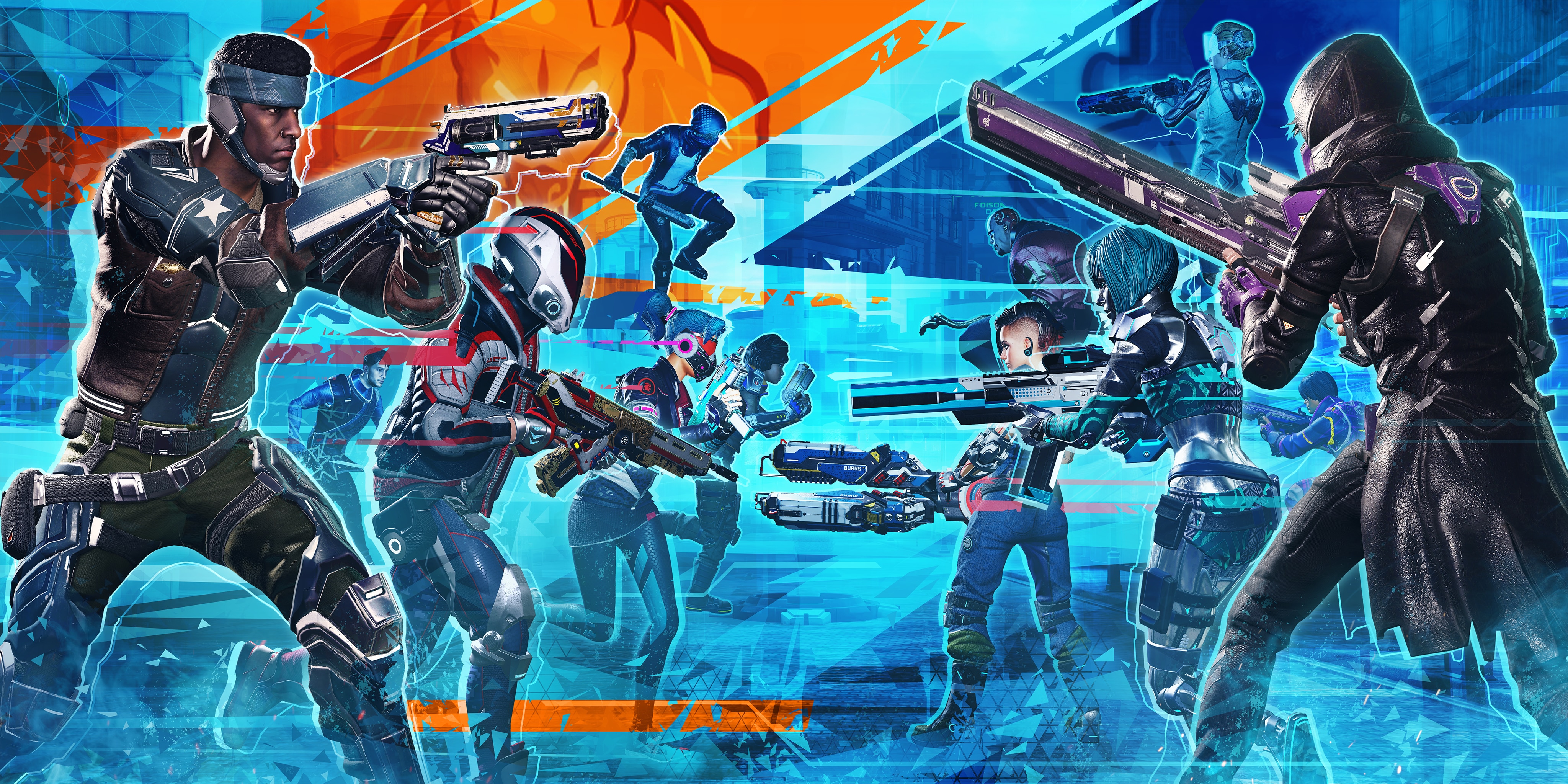 Team Deathmatch is a new fast-paced 6v6 game mode taking place in specific areas of Neo Arcadia. In this mode your goal is to be the first team to score 40 enemy eliminations or be the team with the highest elimination score after 10 minutes, whichever comes first.

In TDM, each time you get eliminated you will respawn at a safe location after a few seconds, and you will keep your hacks & weapons at their current fusion level. Loot can be found all around the map when the match starts and will respawn over time so you can try to maximize your loadout during the match.

Team Deathmatch will be available for several consecutive weeks following the release of patch 2.3, as a third game mode next to Crown Rush Solo & Duo – but based on its success we might extend its availability. At launch TDM will use the Foundry map, but we plan to test new maps in rotation in the following weeks.

Important: Team Deathmatch is still in beta. We are already working on multiple improvements, but we intend to monitor it closely and adjust our plan based on your feedback.

The Arcadium is a new free-roam training mode where the entire city of Neo Arcadia is yours to explore at your own pace.

In Arcadium you’ll be able to practice your parkour and train with different hacks and weapons without worrying about interruptions. Target bots and flying drones will be present in Neo Arcadia to help you improve your marksmanship. Arcadium is a Solo mode for now, but we are looking into making it accessible to a Squad of friends in the future.

You can access Arcadium in the Play Portal under the Train tab or from the Training portal in the back of the HUB.

Important: Arcadium is still in beta. We are already working on multiple improvements, both on AI & content, but we intend to monitor it closely and adjust our plan based on your feedback. 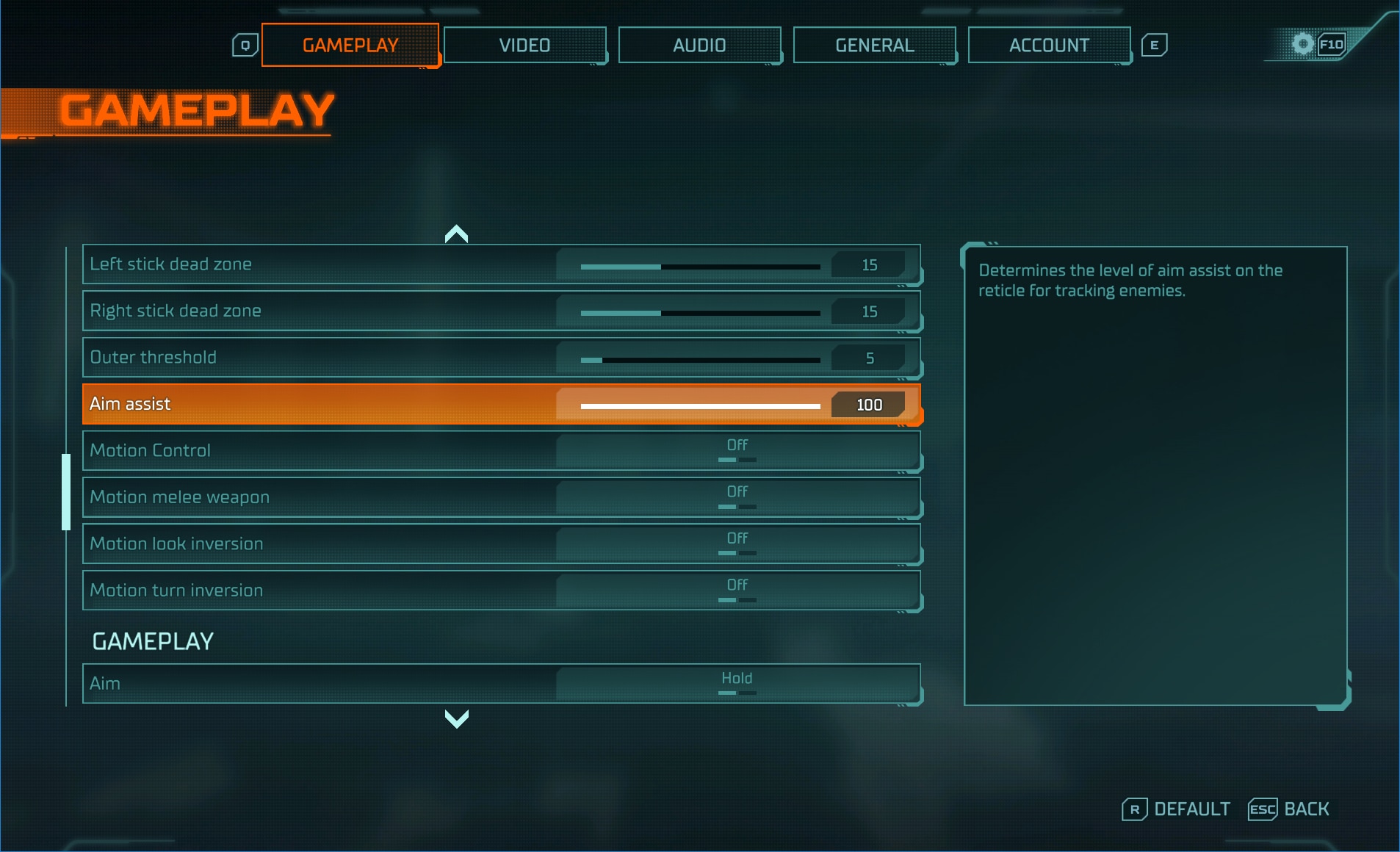 Improving the game’s aiming comfort is critical to make Hyper Scape more accessible and more welcoming for new players. In this patch, we are introducing a series of controller aiming comfort improvements, in particular on the Aim-assist Adhesion that has been fully refactored.

Reminder: There is a controller setting to let players reduce the intensity of the adhesion if they wish.

To maintain balance between Keyboard and Mouse (KBM) & Controller on PC, the level of aim-assist has been increased for KBM players on several weapons.

As always, we will be monitoring the game and your feedback closely to continue adjusting the level of comfort in the future. 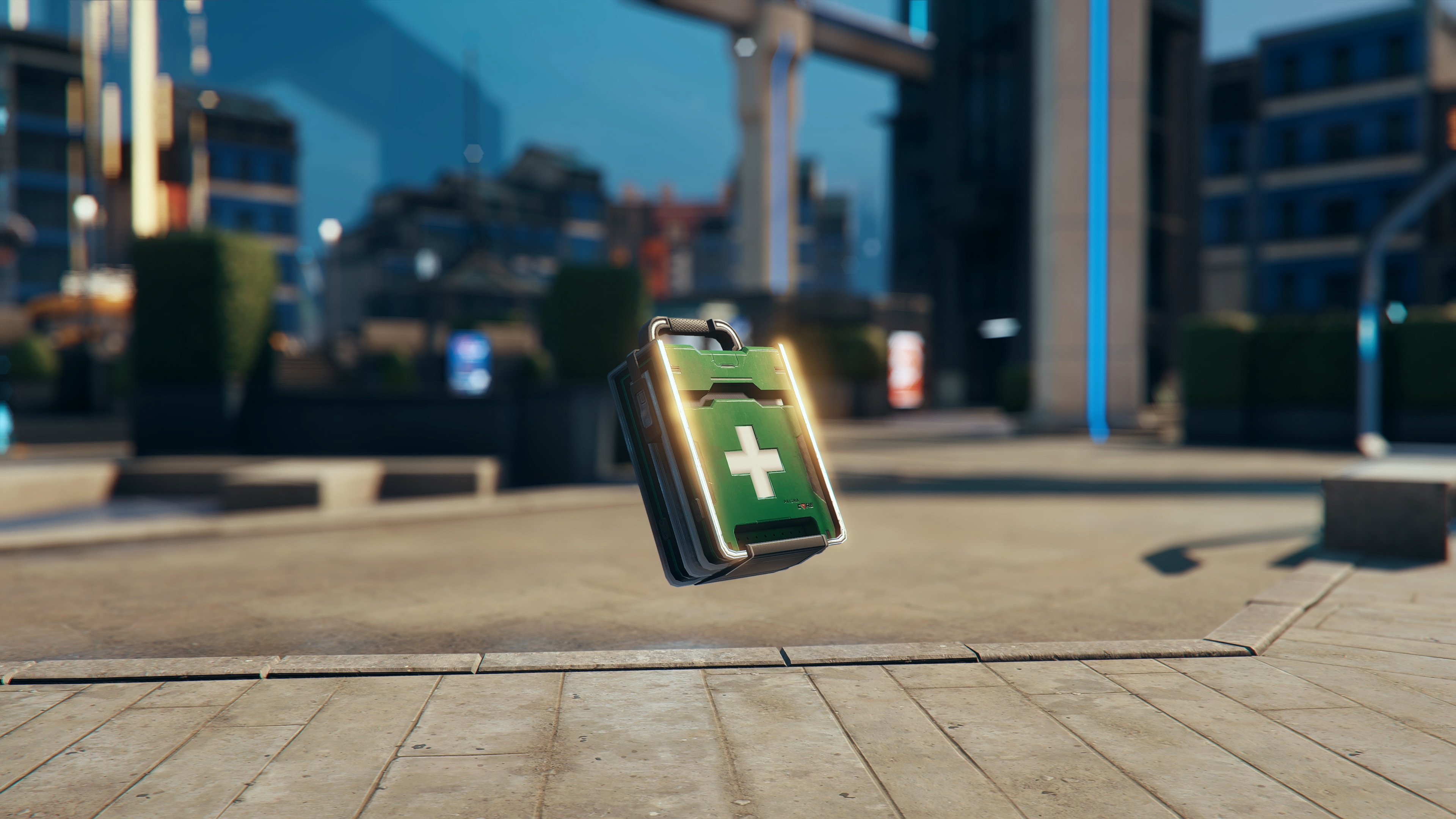 We received positive feedback regarding the Candy pickups of Halloween and decided to extend the idea beyond the event. With patch 2.3, health pickups will be added all over Neo Arcadia when playing Crown Rush modes (Solo, Duo, Squad).

Health Kits will instantly restore 20 HP when picked up (note: you can pick them up even when at full health, but they will not increase speed like the Halloween Candies did).

With this change, the “Health Kit” Game Event will be removed from all Crown Rush game modes.

All the features found on the desktop version like Game Event voting and Battle Pass level-up by watching streams will now work on mobile. For a quick refresher on everything Crowncast offers, please check out the overview page on our official website! 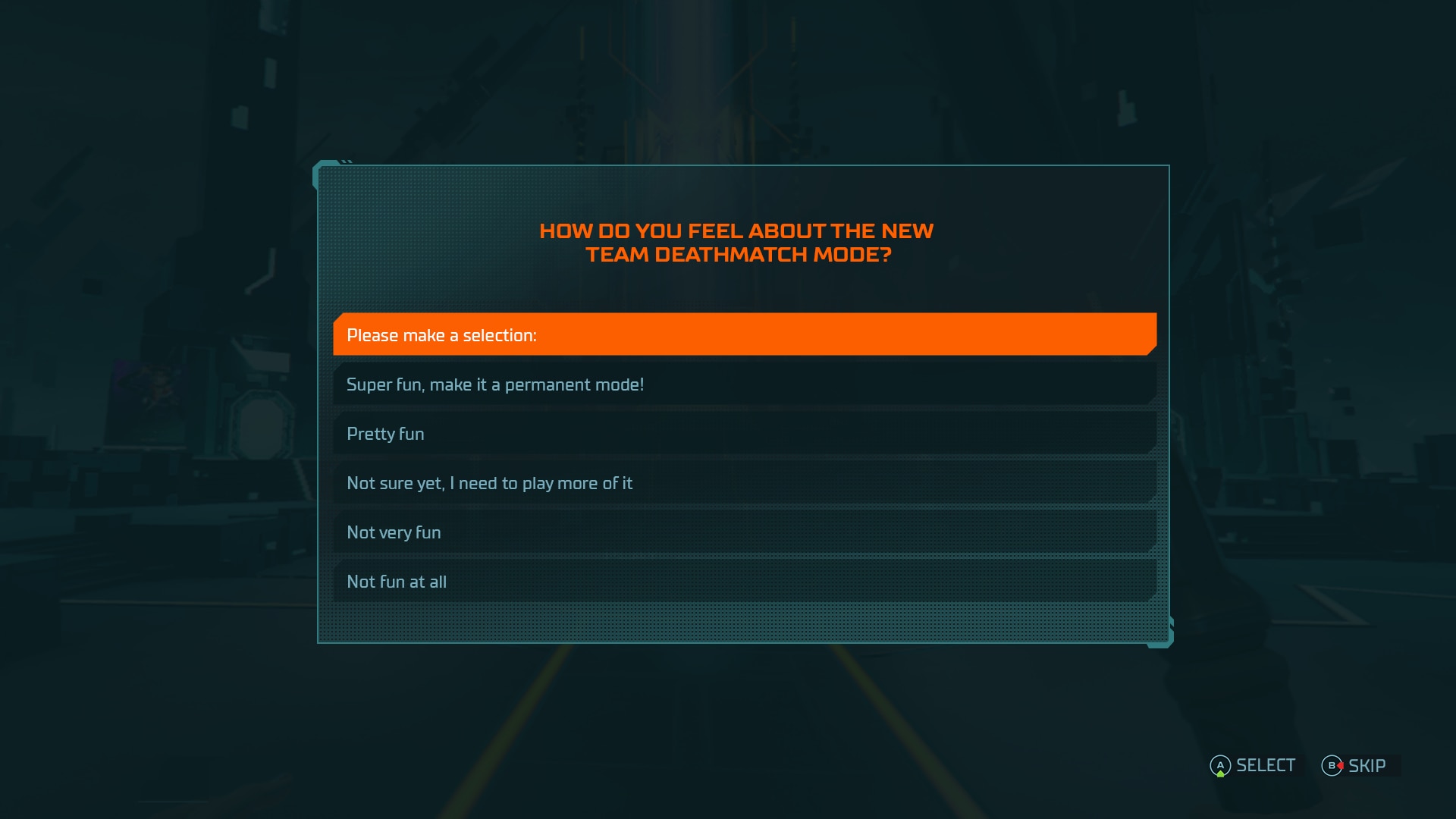 We're adding a Voting/Feedback system that will enable us to directly ask specific questions to the community and allow for collection of multiple-choice responses. These will be questions coming directly from the developers which will give players new opportunities to provide their feedback on certain elements of the game and the overall experience.

Developer Notes: Your feedback will help us shape the future of Hyper Scape, let us know how you feel about the game! 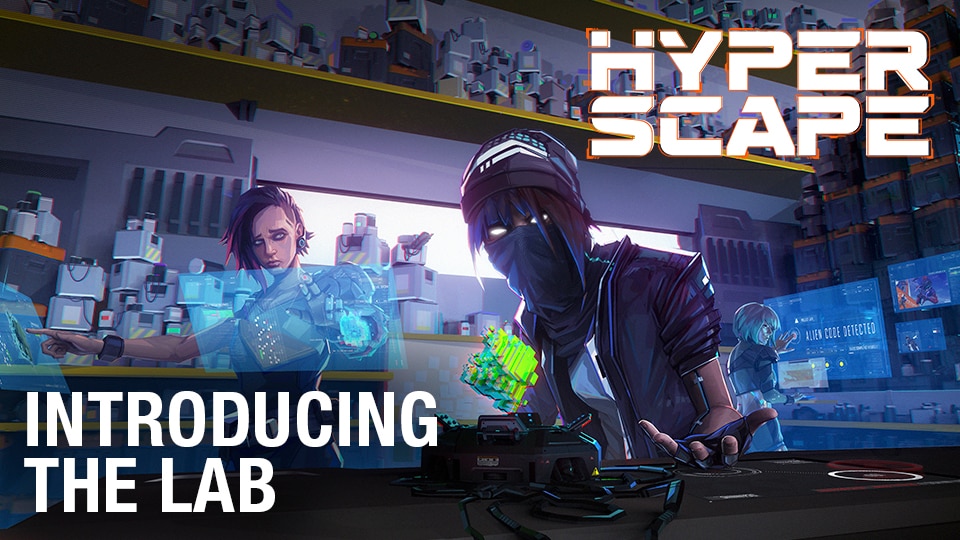 With our new frequent Title Updates approach (read more about it in our blog post), we’ve made the decision to extend the duration of Season 2.

As always, we will be communicating any changes and new features ahead of Title Updates to give everyone a glimpse of what we’re working on. Stay tuned for more exciting new stuff coming soon to Hyper Scape! 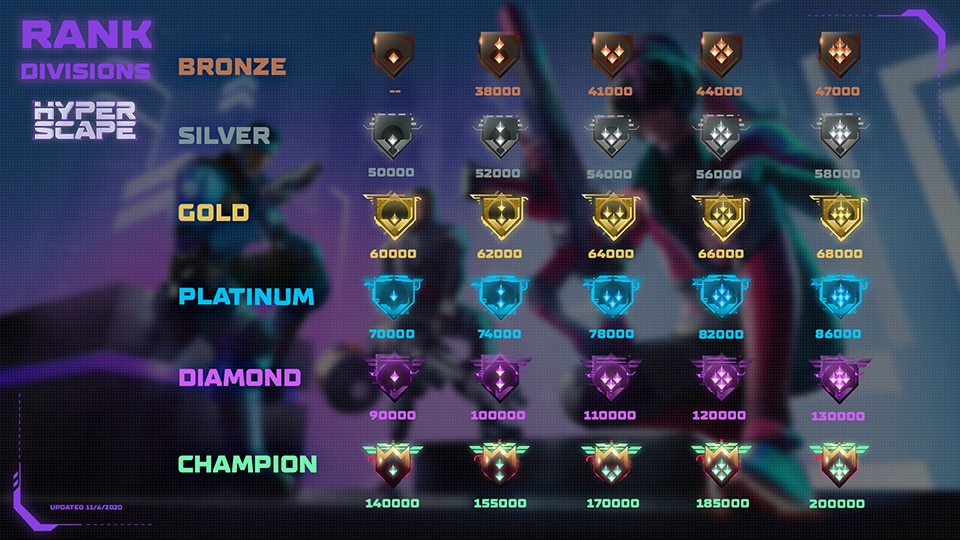 Patch 2.3 will reactivate the Player Ranking system by making Duo Crown Rush a ranked mode. The current Rankings will be reset to allow players to compete fairly following all the recent changes in that system.

Each of the 6 Player Ranks have now been broken down into more granular Divisions. Each Rank will have 5 Divisions, and each Division will have its own logo allowing for quick comparison between players. As part of this change, the Ranking thresholds have been rebalanced to allow for a wider spread of competition providing more opportunity for progression and player comparison.

Also, the Ranking page is now available from the Hall of Champions in the HUB: You can now view your Top 10 Matches which contribute to your Season Score at any time. 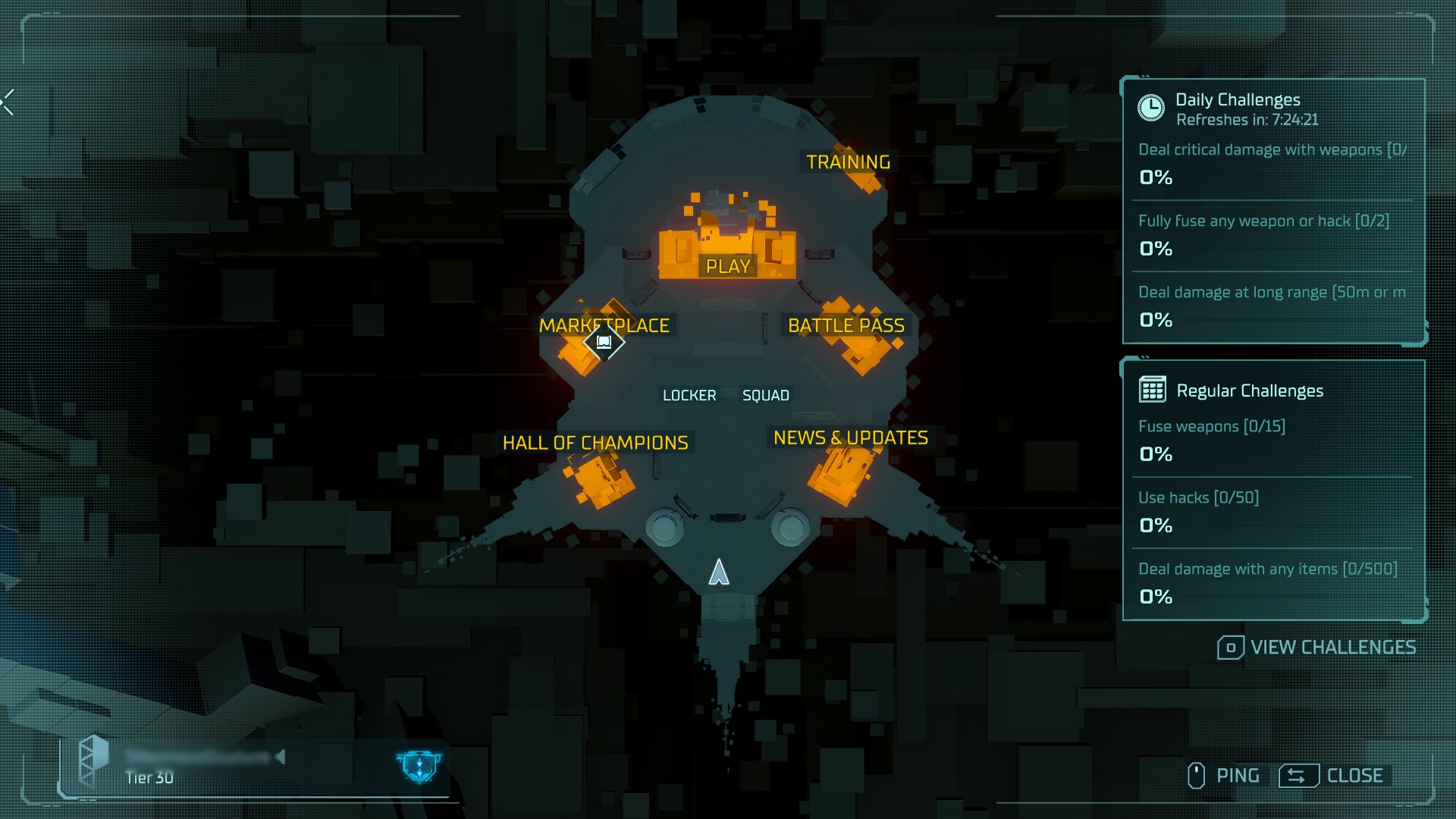 As of patch 2.3 the whole challenge system is starting to get overhauled. The current Season 2 Challenges will be replaced by a new rotating Challenge system with reset.

The Weekly Challenges will be completely wiped, and instead players will get one set of 3 Challenges every week to complete. These new Weekly Challenges will be much broader in scope, so anyone can complete them with enough effort (no specific weapon or map locations necessary). They will also change every week as part of a rotating cycle across several weeks, so if you don't complete them when the time runs out, they're gone.

The 3 Daily Challenges will be simplified as well. A lot of our daily Challenges were very specific and didn't mesh well together. After patch 2.3 refactor, the daily Challenge will be based on a series of sets that rotate every few days and put an emphasis on playstyle rather than specific weapons or hacks.

All the existing challenges will be removed and replaced by this new system at patch 2.3, with the exception of the Challenges linked to collectibles that will stay available.

Developer Notes: Sticking to simpler challenges and reducing the number of weekly Challenges to three per week (for a total of 6 challenges maximum) should make it easier for players to focus on what they need to do to get their rewards.

Important Note: the new Challenges are intended to be more rewarding & easier to complete. This update is a first step of the Challenge System overhaul that we will monitor closely in the coming weeks.

Several game modes will now feature different times of day each match. This includes all Crown Rush modes (Solo, Duo and Squad) as well as Turbo Mode and Faction War.

Developer Notes: The Morning setting is the typical one you've been using so far. The Sunrise setting, as its name entails, shows Neo-Arcadia as its virtual sun is rising, impacting shadows and light color. The Night setting is the one you've experienced in Crown Rush Solo and Squad during our Halloween event.

Developer Notes: Most weapons have received a series of small visual improvements on their aiming reticles and holo-sights to improve combat readability. 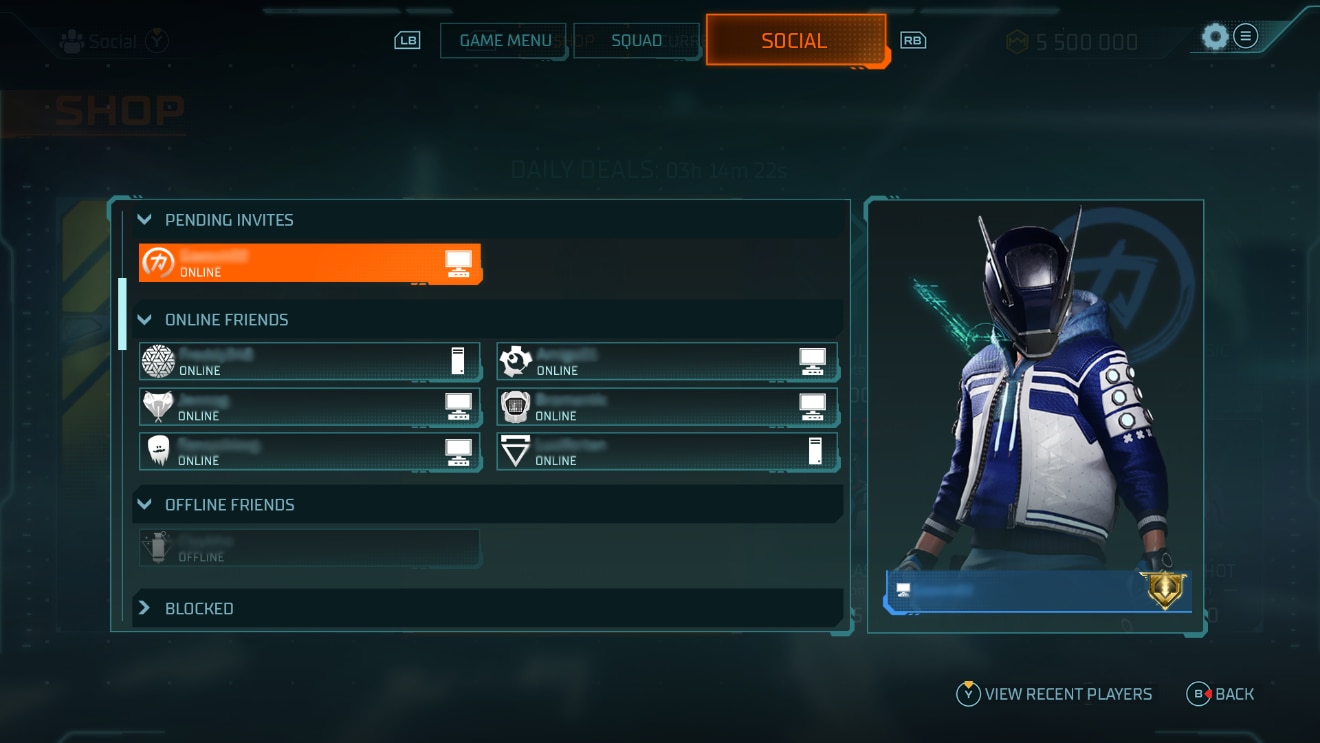 The Game Menu has been refactored to prepare the arrival of Crossplay in December. It is now divided in tabs, one for the typical game options and the other for the Squad. As part of the change the Squad menu (previously Social menu) itself has been modified, to give players an improved access to Player Profile Stats and Squad options.

Developer Notes: The goal here is to improve the access to the squad menu page and the stats, as well as prepare the game for the arrival of Crossplay in December. 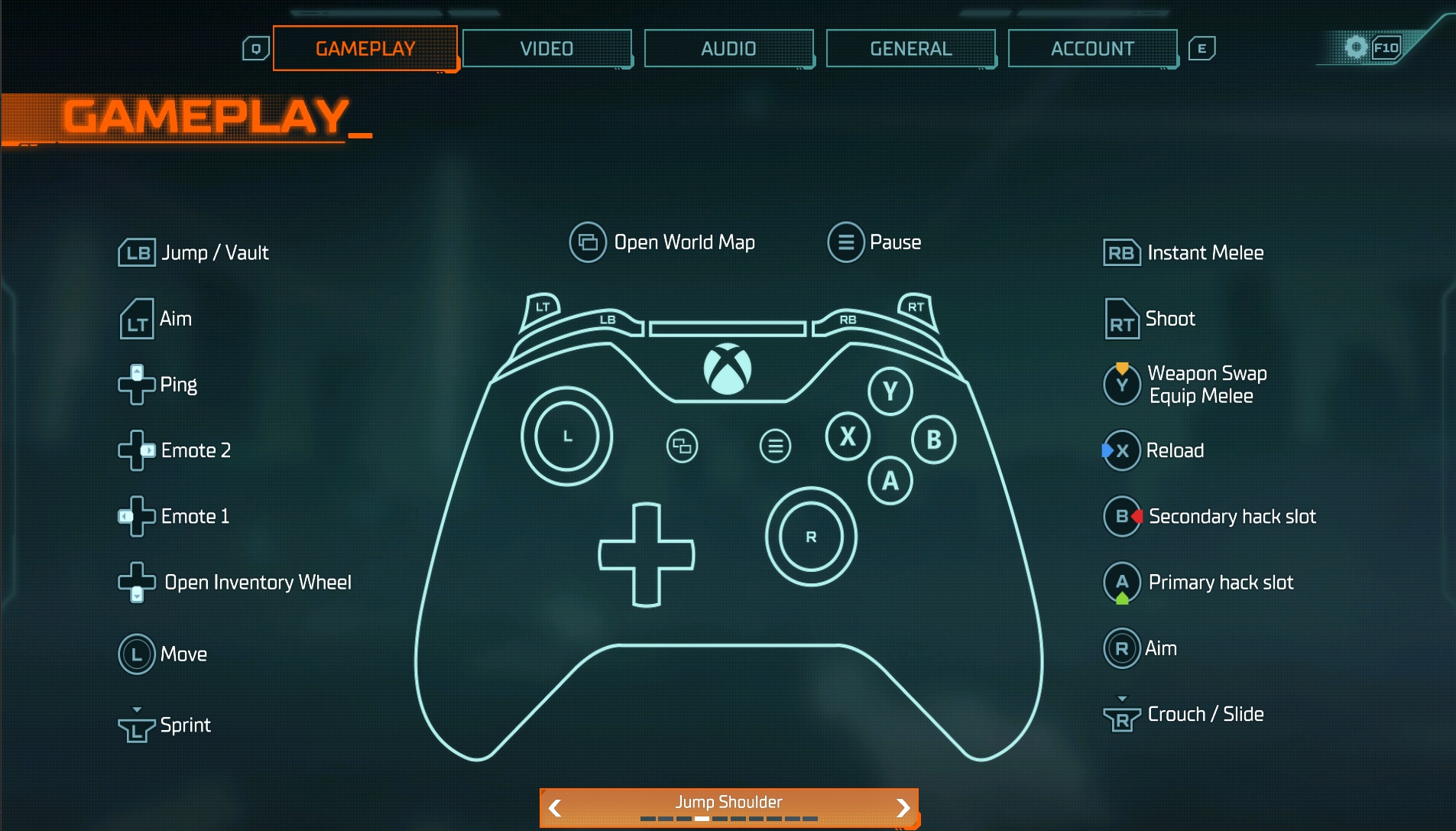 Developer Notes: This ammo changes only intends to fix a glitch in the fusion logic of the weapon, where some fusion levels were not as valuable as the other. It does not change the weapon value overall.