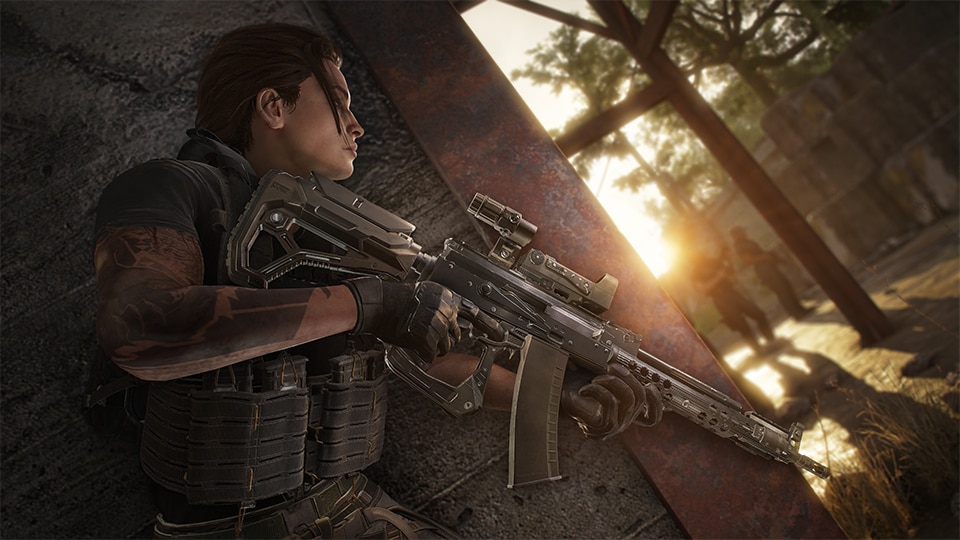 Tom Clancy’s Ghost Recon® Breakpoint lets you step into the boots of an elite US Special Operations soldier. Offering players the opportunity to create a customized arsenal that matches their playstyle is a key foundation of the Ghost Recon franchise.

In this Developer Q&A, we sat down with the team in charge of weapons and Gunsmith to talk about developing the arsenal in Tom Clancy’s Ghost Recon Breakpoint and to dive deeper into the feature.

Q: Let’s talk Gunsmith! Can you explain the team’s vision behind the feature and what’s new with Gunsmith in Tom Clancy’s Ghost Recon Breakpoint?

With the new Gunsmith and weapon system, players will feel how each attachment changes and how the gun operates. It’s important to make each weapon and attachment combination feel different.

Equally important to us was to offer players an extremely polished visual Gunsmith experience. Each attachment and weapon combination are set up and aligned by hand to perfectly match the individual models and animations of that weapon.

It’s important to ensure a consistent, high-quality visual experience for weapons, which is why not all attachments are compatible with all weapons.

The team’s objective is to offer players as close as possible to real-life spec ops load outs and all compatible attachments. These were selected based on extensive criteria (weapon category, manufacturer, weapon range, and more).

The new Weapon Mark and dismantle systems have been implemented to improve this experience. A lot of spec ops soldiers customize their weapons piece by piece, even changing screws to improve their performance. Each weapon has a specific Weapon Mark progression system with small stat upgrades and passives tied to it. All of the bonuses were tailored to enhance the spec ops experience in Tom Clancy’s Ghost Recon Breakpoint and were carefully balanced in both PvE and PvP.

This feature gives a layer of additional depth for hardcore players who love to customize their weapons.

Q: What will players be able to customize in the Gunsmith?

Players can customize the rail, under barrel, scope, muzzle, and magazine. New options will be added, such as muzzle brakes and IR lasers.

Up to 22 different options per weapon will be available, with 57 weapons at launch and 31 weapon alternate versions. That’s a lot of combinations!

In Ghost Recon Wildlands, we heard the community got frustrated when they were unable to change the attachments on legendary weapons, which is why we made sure to make this possible in Tom Clancy’s Ghost Recon Breakpoint.

Q: Are there plans to add more attachments post-launch to offer additional variety?

Yes! We will add new attachments with unique behaviors, and we’ll also try to add more attachment variety per weapon category. All of this content will be unlockable through gameplay.

Removing some attachments allowed for more in-depth attachment modifiers, which grants more complex effects and emphasizes unique weapon variants that are unlocked through progression and exploration. Those variants (called alternates) have unique behaviors, stats, and parts such as handguards, stocks, triggers, and barrels.

Q: Can you talk more about the weapon variants?

The variants act differently than their default counterparts, and they will be different visually and in gameplay recoil. They will also have differences in range, damage, and stability.

Because modern weapons can often be customized to transform your classic assault rifle to a CQC or long-range rifle, the goal of the variants is to add more options with a progression layer (the Weapon Mark system).

The team decided to embody that versatility with separated (variant) weapons, which is why we no longer have stock, trigger, or barrel customization in the Gunsmith because those attachments are included in the variant’s modifications.

This allowed us to make a lot of improvements: each variant has new attachment possibilities, new fire modes, huge stat and behavior modifiers, and sometimes a different weapon category.

It’s crucial that players really feel the impact of the modifications they choose in the Gunsmith or during weapon selection. We focused on quality over quantity, concentrating on making the choices that are available to players feel very impactful.

Q: Could you give us an example of how the weapon variant is different from the base weapon?

Let’s use the 416 as an example. We have the default factory version which will be the standard.

Each variant redefines the look of the weapon, the basic stats, compatible attachments, fire mode, and Weapon Mark progression.

Do you want to play aggressively? Pick the Assault 416 for versatility and more damage.

Need a long-range weapon that’s also efficient in mid-range fights? The Scout is your perfect match.

Q: Does each weapon have a variant?

No. However, we made sure to provide variants to our more iconic weapons and most of the assault rifles for launch. A variant is almost as complicated as designing and balancing an entirely new weapon, and we want to focus on providing unique weapons that feel distinct.

With 31 variants available at launch and more planned for post-launch, we’re really excited to see how players dig into the variant customizations.

Separating variants adds fantastic depth to some of the most recognizable weapon options. Fans of specific weapon brands or models will be able to create nuanced experiences based on the alternate they choose.

Having variant weapons is a great balancing tool and allows for very interesting depth to a player’s arsenal without negatively impacting the balance in PvE or PvP.

Q: Will you be able to color weapon parts individually?

Yes! Players can freely use all colors and camo patterns they have unlocked, which is new in Gunsmith for Tom Clancy’s Ghost Recon Breakpoint, where each camo had a limited pool of related colors.

Players can create some of the more highly requested color combinations, like having a black rifle with tan attachments.

Q: Will canted sights (reflex or iron) be added?

Some players are interested in having this option, but we have no plans to add them currently. We’re keeping an eye on player interest for the future.

Q: Can lasers be mounted on the top rail?

In some cases, yes. Particularly if there is enough physical room on the top rail and if the scope you have equipped would not be obstructed by the addition of the laser. For all the cases where there would be a visual obstruction, the laser will default to the side rail.

Q: Are there any changes to the shooting sensations, like recoil and reloads, from Tom Clancy’s Ghost Recon Wildlands?

The shooting system has been improved from Tom Clancy’s Ghost Recon Wildlands. One of the most noticeable changes are the ballistics. All weapons use their real-world counterpart’s muzzle velocities.

This helps emphasize the differences between weapon types and makes it feel more lifelike.

Reloads have been improved by the authenticity team, who motion captured real operators to ensure the animations feel like a real spec op. In Tom Clancy’s Ghost Recon Breakpoint, we split reloads between empty and non-empty. You will also be able to unlock a faster reload speed which will affect the animations you see.

Weapons have a lot more life during shooting, making them more realistic but also harder to master. For example, the weapon’s recoil operation mechanisms will affect its movement.

Each weapon has a specific way of shooting that can be learned by players, allowing them to master their weapon in the same way that a real top tier operator would.

Recoil and spread are now more predictable, both can be affected depending on how you outfit your weapons with attachments.

We also reworked the weapon sound effects to make the noise more impactful. These changes have been implemented for the closed beta, and we look forward to hearing your feedback.

We hope players enjoy all the changes we made to make shooting in Tom Clancy’s Ghost Recon Breakpoint realistic and enjoyable!