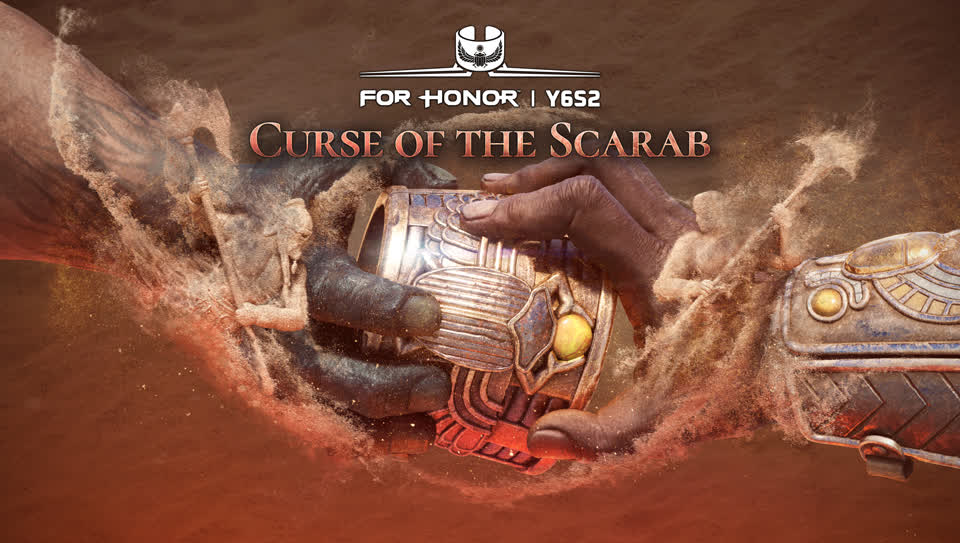 Starting June 16th, Y6S2: Curse of the Scarab launches the next ancient relic and its stories into the world of For Honor.

In the aftermath of the Great Cataclysm, the fearless Raider, Bolthorn Raven-Hands, embarked on a quest to restore his clan’s glory. Long had his people known hardship, and he journeyed to distant lands in search of treasure that might ease their suffering. No prize was so great as the Scarab Bracelet. The crowning jewel of a lost civilization, the relic’s magic promised to fill Valkenheim’s tables with meat and mead once more. And so, Bolthorn betrayed a friend to steal it.

For Honor Y6S2: Curse of the Scarab 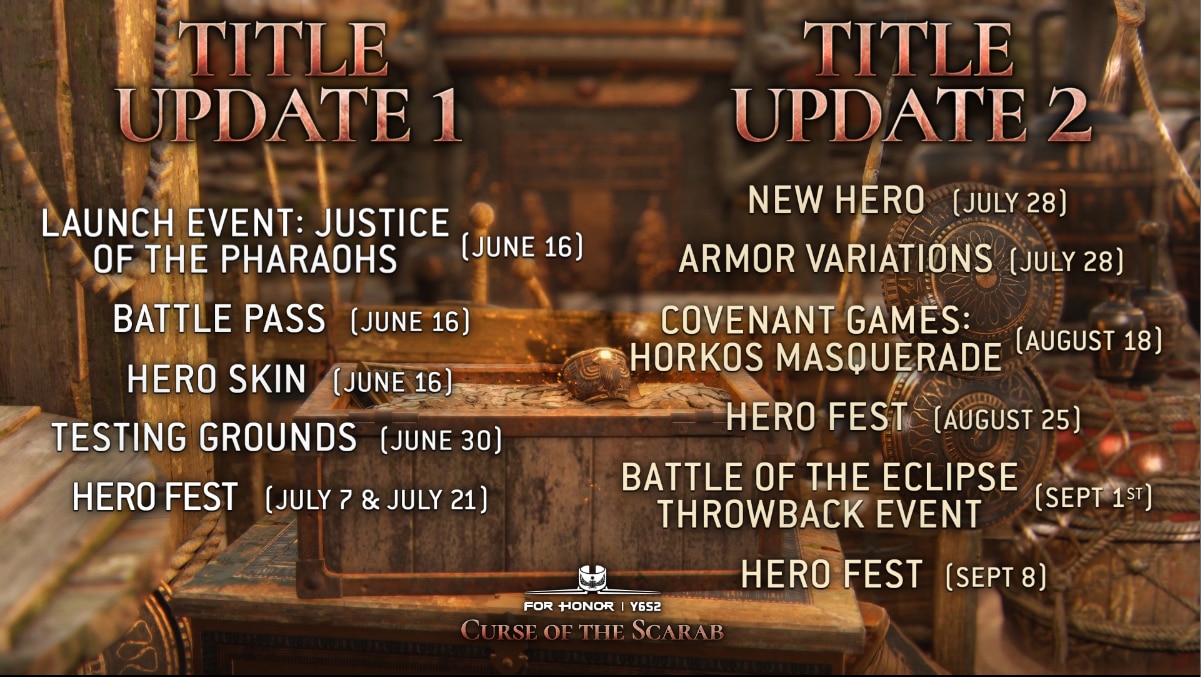 In this Warrior’s Den recap article, we’ll mainly go over what Title Update 1 has to offer: the Bolthorn Hero Skin, the Justice of the Pharaohs, event, the Battle Pass, everything regarding the Testing Grounds and more. Title Update 2 will introduce the new Hero and Armor Variations, more information to come at a later date.

For a more in-depth discussion of the season and what’s in store for the launch of Y6S2: Curse of the Scarab on June 16th, we encourage you to check out the Warrior’s Den VOD. 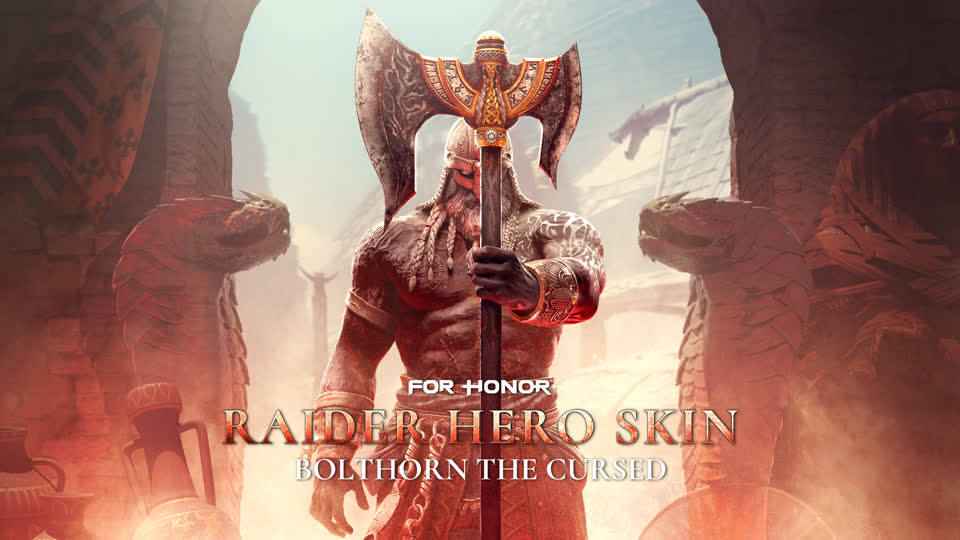 As a reminder, the Hero Skin is a new customization element introduced in Year 6, who will be based on important characters in the history of For Honor. The second Hero Skin of the year is Bolthorn the Cursed. This Hero will override the entire Raider’s customization. However, players will still be able to change its material. During the Warrior’s Den, we presented Bolthorn and his tie to the Y6S2 Narrative.

The Bolthorn the Cursed Hero will be available for purchase starting June 16th for 25 000 Steel. For $11.99, players will be able to buy the hero skin as well as a 7-day champion status and 3 scavenger crates.

Justice of the Pharaohs 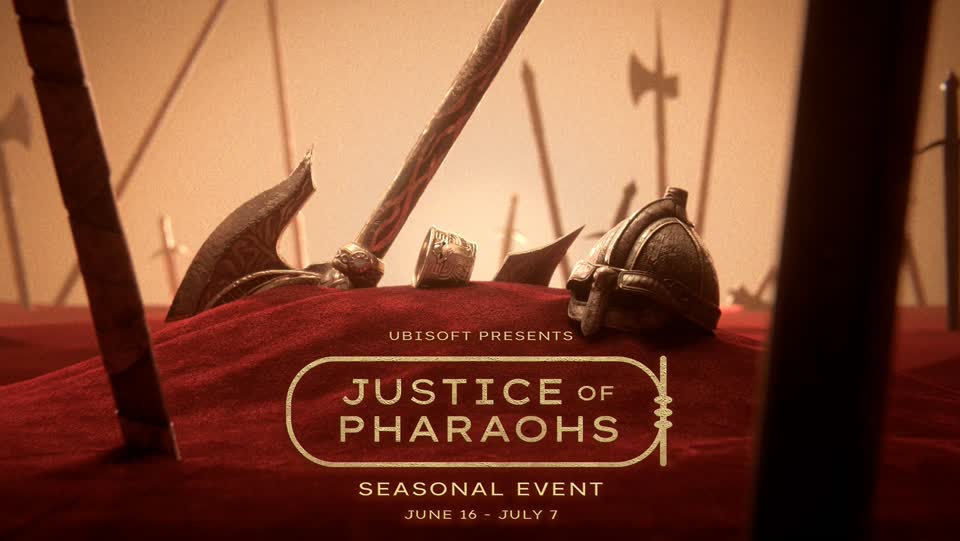 To save his struggling clan, the Raider, Bolthorn Raven-Hands, journeyed to the ruins of a desert kingdom and stole the Scarab Bracelet. The relic was said to bring long life and prosperity to the Pharaohs – but, unknown to Bolthorn, the jewel doomed any mortal who would disturb it. Now Heathmoor is in the grips of the Scarab’s Curse, devastated by famine, disease, and sights once thought impossible. The common soldier has been annihilated. Although the battle for Dominion still rages, the ranks have been thinned to Heroes alone.

Only from June 16 to July 7, participate in For Honor's Y6S2 launch event, Justice of the Pharaohs, and claim exclusive event loot which includes a mood effect, a battle outfit, and ornament, and weapons! Also, for a limited time only, play a unique variation of Dominion with no minions. Many of Heathmoor’s minions have succumbed to Bolthorn’s curse, leaving the battlefield open to the heroes of Heathmoor. How will this affect your team’s strategy? 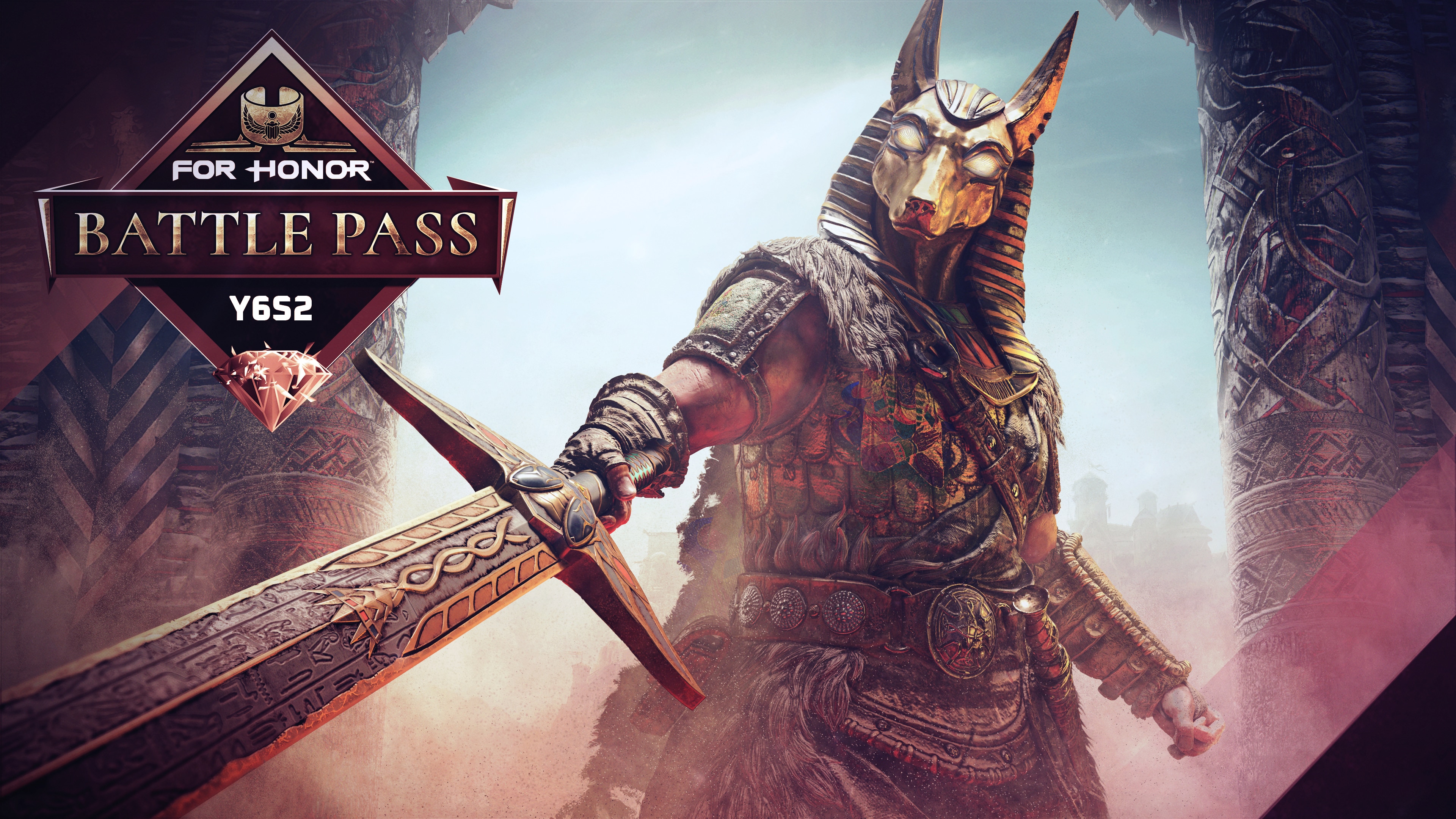 To bring glory back to his clan, Bolthorn Raven-Hands ventured west, far from Heathmoor. Exploring lands of desert and sand, the Viking found the ruins of a fallen civilization forgotten by time. Along with the mystical Scarab Bracelet, Bolthorn has brought back ancient weapons as mighty gifts for his people, with the promise that the distant past will help them shape their future.

Embody the ancient past with the Y6S2 Battle Pass. Get 100 tiers of rewards for all heroes to unlock new weapons and mood effects. Premium rewards include Cursed-themed outfits, effects, weapons, a battle points boost from completed matches, 11K steel and more. The Y6S2 Battle Pass will be available from season launch to September 13th, 2022.

We got a hefty Fight Update for you for Y6S2. They include the following:

Please follow this link to view the Y6S2 Fight Update Article, where the Fight Team breaks down in depth each of the changes above, along with what will come in this season’s Testing Grounds: https://forhonorgame.com/Y6S2_fight_update

In addition, we also have our patch notes here is the link to the patch notes containing all information that will go live in-game starting on June 16th: https://forhonorgame.com/patchnotes2360

We’ll see you again at the next Warrior’s Den Recap. Stay safe!