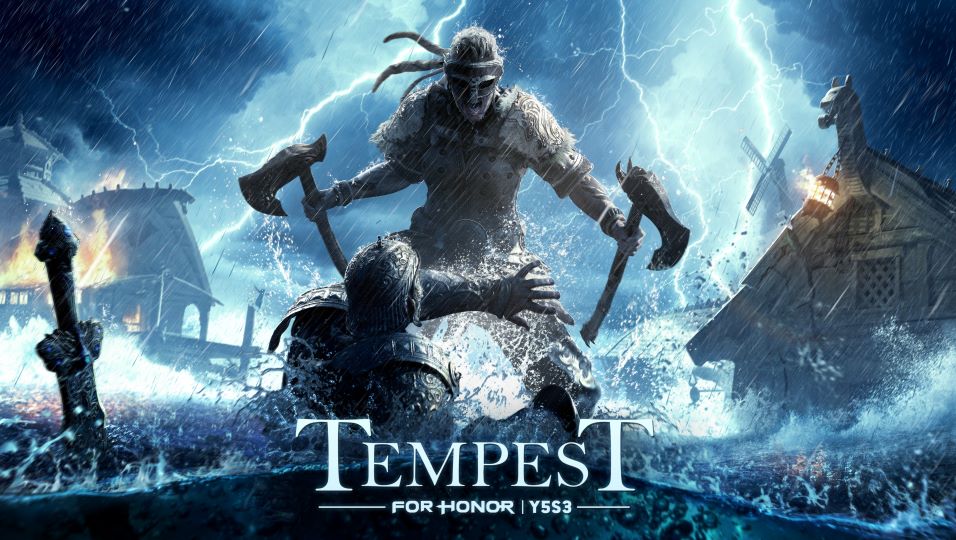 Starting September 9th, Y5S3 Tempest brings drastic change to the world of For Honor as we close the chapter on Y5S2: Mirage.

Under a scorching sun, the factions of Heathmoor long fought for water. But what was once scarce then came in overwhelming abundance. The unbearable heat of the drought melted the glaciers of Valkenheim and as a result, the water levels rose dangerously. Torrential rains and violent winds fell upon Heathmoor, with no end to the storm in sight. With the home they once knew overrun with water, warriors found themselves out of their element. All except the Vikings, for whom the storm had brought about rebirth… and an opportunity to reign supreme.

The aforementioned themes are strongly represented in Y5S3 Tempest’s in-game realization and seasonal customization. For more information about the season, continue reading. We’ll go over the Storm Tides event, this season’s Battle Pass, everything regarding the Testing Grounds and more. Stay tuned for new armor variations and maybe some other surprises for Y5S3 TU2.

Lastly, for this season, we are excited to announce that, at launch, all heroes will be receiving a unique execution.

For detailed discussion of the season and what’s to come with the For Honor Dev Team, be sure to check out the Warrior’s Den VOD to see what’s to come on September 9th at launch Y5S3: Tempest. Y5S3 WD Reveal VOD Amid catastrophic flooding, Horkos and Chimera both struggled to survive. As safe land became a rare commodity, the animosity between warriors only intensified. Starting on season Launch until September 30th, players will be able to play through a Free Event Pass and gain access to a multitude of rewards such as a new Battle Outfit, an Effect as well as an Ornament. During the event there will also be new weapons available for players to loot. The coming of unending rains led the Vikings to believe that Aegir and Ran, the deities of the sea, were listening. Legends said that the married couple ruled over the oceans, and that their generosity came from offerings. For Chimera, this meant honoring Ran by respecting nature. But Aegir demanded blood… and Horkos were more than happy to provide.

These themes make a strong impact in this season’s Battle Pass. It is now possible to dress your warriors with gear that will remind you of Norse divinity or to wear the jewels of the ocean.

Gear up for the storm with the Y5S3 Battle Pass. Get 100 tiers of rewards for all heroes to unlock new weapons and effects. Premium rewards include Tempest themed outfits, effects, weapons, a battle points boost from completed matches, 11K steel and more. This Y5S3 Battle Pass will be available from season launch to December 6th.

The Stage 2 of the Dominion Series concluded on Saturday, Aug 28th. Participating teams in the NA and EU region were granted cash prizes and points that will count towards the Championship Finals in February. The VOD will be available on the ForHonorGame twitch channel and on Ubisoft’s YouTube channel. The bracket results can also be found on battlefly here for the EU region and NA region.

Two more stages are left for the 2021 Dominion Series – Registrations for the Stage 3 Qualifiers are currently live at battlefy.com/dominionseries and the first Qualifier will begin on Oct 9th.

Following up on last season’s Testing Grounds phase, we have a lot of elements that will enter the live game at launch of this season through Patch Changes:

For this season, two topics are going to be entering the Testing Grounds from September 16th to the 30th:

If you want more information on the changes implemented at launch and what’s to come in the Testing Grounds this season, here is a dedicated article that breaks down all the details given by the fight team: Testing Grounds

That is the recap that we have for you Warriors and we hope you enjoyed the Warrior’s Den!

We’ll see you again at the next Warrior’s Den Recap. Remember, no one is safe from the Tempest.