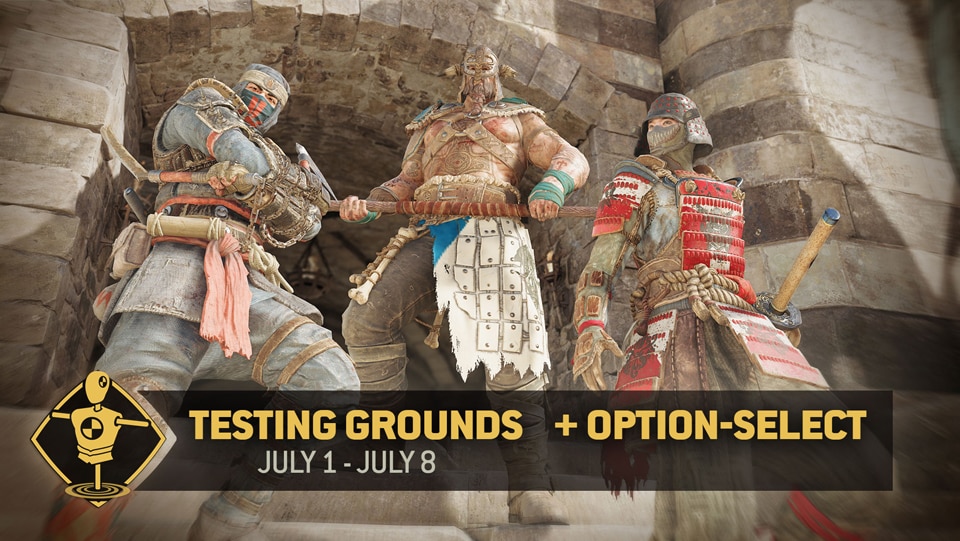 JC from the Fight Team here. It’s that time of the season again and we’re back with yet another Testing Grounds! They will be open from July 1st to July 8th.

We’re doing something a bit different this time – we’re trying both Hero changes as well as system-level changes in the form of Option Select changes.

The changes we’re covering in this Testing Grounds are:

Raider’s changes are mostly about making the hero more consistent as well as more efficient. We’re improving the 1v1 potential of the hero while also making sure their Zone Attacks are better.

Orochi’s changes aim to improve the performance in 1v1 situations as well as in group fights, where the hero is currently struggling.

Shinobi received quite large changes which should redefine how the hero plays. Shinobi should now be more focused on close-range combat and ganking, with the moveset centering around landing as many Sickle Rains as possible.

Finally, we’re testing tech that should see the majority of Option Selects to be removed from the game entirely.

Keep reading below for more details on the changes you can expect coming to Raider, Orochi, Shinobi, and Option Selects. You can also tune in to tomorrows Warrior’s Den where Stefan and myself will be going through all the changes.

Before getting to the Testing Grounds details, we would like to address some errors in the roadmap shown in our previous Warrior’s Den. Covenant Games should be starting a week earlier, right after Testing Grounds, on July 8th and ending on July 15th. Also, the Dominion Series Stage 2 Major will begin on August 28th. This is great news for participants as they will have one extra month to prepare. 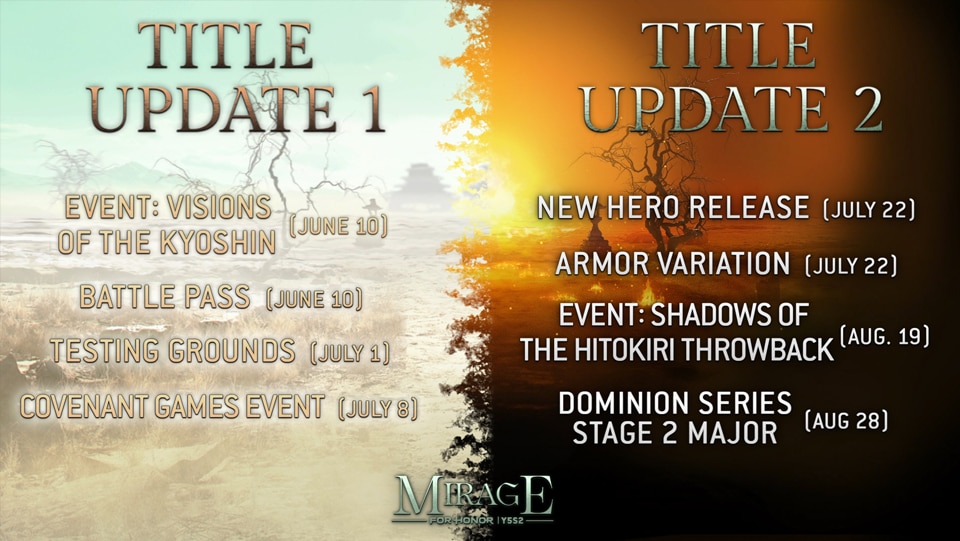 Developer’s comment: Storming Tap had a few efficiency problems, most notably it was reactable by many players, even though it had variable timing. We’ve adjusted this so that it always comes out at the same timing as Feints, sped it up so it is more reliable, and made it not interrupted when blocked so that Raider can pressure opponents better.

Developer’s comment: This should still let Raider use Heavy Attacks to trade with opponents, but should no longer be at timings where players could take a hit, feint then guardbreak their opponents.

Developer’s comment: Raider uses Zone Attacks as alternate Heavy Attacks, both in mixups and in punishes. We’ve adjusted the Stamina cost of these attacks to cost the same as Heavy Attacks so that Raider can use them more often and more efficiently.

Developer’s comment: Stampede Charge was too slow to be effectively used as a ganking tool. The slightly faster speed should make it easier to players to use it to plan out ganks.

Developer’s comment: These attacks should now be in-line with other chained Light attacks.

Developer’s comment: This should help Raider catch fleeing heroes better with a soft feint to Guardbreak than before.

Developer’s comment: Orochi needed a way to be more effective in outnumbered situations as well as being able to go on the offensive more efficiently. With this change Orochi should be able to perform both well, instead of relying on the Finisher’s recovery cancels only.

Developer’s comment: We want to reorient Orochi into a powerful “One-Two” hero with multiple options when landing attacks so that players no longer need to rely on multiple fast light attacks and instead focus on mixups and agility. These changes should push Orochi towards this archetype.

Developer’s comment: Storm Rush’s role has expanded. While it can still be used as an opener, its main purpose is now as a mixup with his new Kick move where depending on the situation Orochi’s opponents must make a read as to block a Front Dodge Storm Rush, or dodge the Front Dodge Kick (see Front Dodge Kick below).

Developer’s comment: Orochi did not have a Melee for the longest time, but this felt like the right time to improve on Orochi’s offense, considering the new direction we are pushing the hero towards. As Orochi moves from being a pure counter-attacker towards a more balanced 1v1 hero, this new option should give Orochi players more ways to open up opponents.

Developer’s comment: Riptide Strike, at this new speed and with the new iframes, makes it the optimal 1v1 counterattacking tool – it should be more reliable than before and deals slightly more damage than side Dodge Attacks.

Side and Front Dodge Lights

Developer’s comment: With this new property, Orochi can effectively both target swap in fights and not be interrupted against attacks with fast recoveries.

Developer’s comment: Orochi had little incentive to use their Side Heavy Finishers; while they were faster than the Unblockable top version, these attacks did not allow for defense in outnumbered situations. With these new properties, we hope that Orochi is now able to move more swiftly in these types of situations and can deal with multiple opponents more efficiently.

Developer’s comment: Hurricane Blast was situational and was barely used – we opted to improve the functionality of Wind Gust instead so that it still provides a good satisfying attack while keeping some of the more advanced properties of Hurricane Blast.

Developer’s comment: Shinobi’s use of ranged attacks was proving to be problematic. Players were able to use Ranged Guardbreak to gank opponents without indicators, and could use Ranged Heavy attacks to poke at opponents safely, from off-screen in group fight situations. Finally, other heroes just do not have the tools necessary to deal with these Ranged Guardbreaks – even if Shinobi ends up pulled to the ground, the opponent is still stuck in an animation in which they will certainly be hit by an external attacker. We want to change how Shinobi plays so that the hero is more of a very agile close-ranged hero rather than being relegated to running away from opponents and using ranged attacks, and ensuring that Shinobi’s tools work with respect to the opponents’ tools.

Developer’s comment: Shinobi has difficulty accessing dodge attacks to counterattack and initiate against opponents. This change should help in making the hero more viable and better able to initiate offense.

Developer’s comment: Shinobi’s new offense revolves around landing Sickle Rain as much as possible – these changes should help in making the hero flow better towards their mixups.

Developer’s comment: Sickle Rain is now the main focal point of Shinobi – as we move towards landing the attack more and more, making the Top version unblockable ensures that Shinobi has effective 1v1 mixups and can land the attack externally, while the side undodgeable versions are used in various mixups after a Front Roll to catch opponents who attempt to dodge the Flip Kick.

Developer’s comment: Shinobi now has a definite use for Front Roll as a mixup tool after a Ranged Heavies and Back Flips – Flip Kick is now fully unreactable and players must read what option their opponent will do instead of blindly dodging every time they see Front Roll.

Developer’s comment: Flip Kick is now also a chain extender, giving a free Heavy attack that chains to Sickle Rain when it lands.

Developer’s comment: This new Sprint Attack is more in line with other fast Bash attacks from Sprint – the guaranteed damage on hit ensures that the move is still viable, but it should no longer be frustrating to play against, and allows us to remove the jankiness with the variable hit timing, and extended hit timings on a first hit.

Developer’s comment: This new option for Shinobi ensures that the hero flows better into Sickle Rain and gives proper damage on two of their bashes.

Developer’s comment: Back Flip is able to give Shinobi distance quite easily – with this change, Shinobi has to work harder to get it.

Developer’s comment: Shinobi was the only hero with a guaranteed, automatic Deflect. This change gives players more agency as to whether they want to use the attack or not, and now leads to mixups instead of guaranteeing damage against different heroes.

Developer’s comment: Shinobi was gaining a lot of damage after a successful Deflect – this change now shifts the balance towards mixups where the opponent has to read if Shinobi will perform a Kick or an undodgeable Side Sickle Rain.

Developer’s comment: Shinobi now has access to strong mixups that lead to Sickle Rain when parrying, improving the hero’s flow.

The list of changes to Shinobi is quite exhaustive and may seem jarring to many players as the hero plays differently that before. We feel that this version allows much more variety in combat, is much more successful with mixups, and much healthier in the landscape of For Honor’s heroes’ toolsets. We look forward to your feedback on these changes!

We are introducing new tech in this Testing Grounds that lets us eliminate Parry Option Selects from the game. This ensures that offense is more potent, especially Unblockable offense, and has the potential to have large changes to the game’s meta at the skill levels where they are used.

We would also like to give a special shoutout and thanks to some members of our community who graciously helped us identify and reproduce a large variety of Option Selects. The Fight Team would like to specifically thank the following people with their involvement in this improvement:

Their help has been invaluable in helping us pinpoint exactly what the problem was with our Option Selects and helped us properly reproduce them so that we could shut them down.

[Stefan’s note: Huge thanks to these players for sharing their specialized knowledge of the game’s mechanics. This knowledge sharing here, and over the years has been critical to our ability to target the kinds of changes that we feel For Honor needs.

Quick reminder: when you fill out your player survey or post on social media, remember that it is the dev team that chooses the exact solutions for these problems, so if you don’t like the solutions here in the Testing Grounds, remember that these players aren’t to blame! :D]

We look forward to your feedback through the usual channels; we’ll monitor social media and will send a survey to formally gather your feedback.