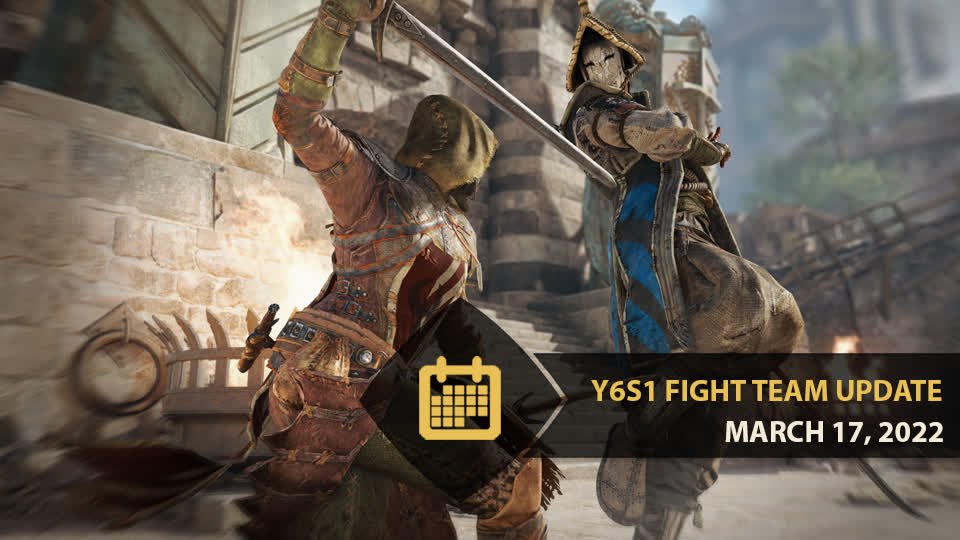 The start of a new season often brings fight changes to For Honor and Y6S1: Golden Age is no exception. Starting at season launch, on March 17, you can expect changes to Dominion based on your much valued feedback on previous Testing Grounds. On March 31st, we will be holding a new Testing Grounds. This time we will be looking at a 2nd iteration of Conqueror and a revamp for Shaolin. If you missed it, and prefer to watch our discussion, you can do so using this link.

Below, we will go into detail on the Dominion changes going into the live game and the changes being tested in Testing Grounds for Shaolin and Conqueror. We have already gone over these in our latest Warrior's Den livestream.

After 2 Testing Grounds and 3 different iterations, we're finally ready to deploy our changes to Dominion, which we hope will improve the overall experience. Long-standing irritants have been taken out of the equation, every Class gets a fair shot at unlocking their feats and the giant Renown swings of the Defender and several other Special Renown rewards are a thing of the past.

Let's dive right into detailing what the new Dominion Improvements are!

We've tried a few things to see if changing the Capture Speed could alleviate « Death Balls » but we saw that slower capture times caused more issues than it solved, especially when it comes to highly contested Capture Zones that would not change hands as often as we liked in the course of a match.

We've thus decided to not change Capture Speeds when deploying the Dominion Improvements. 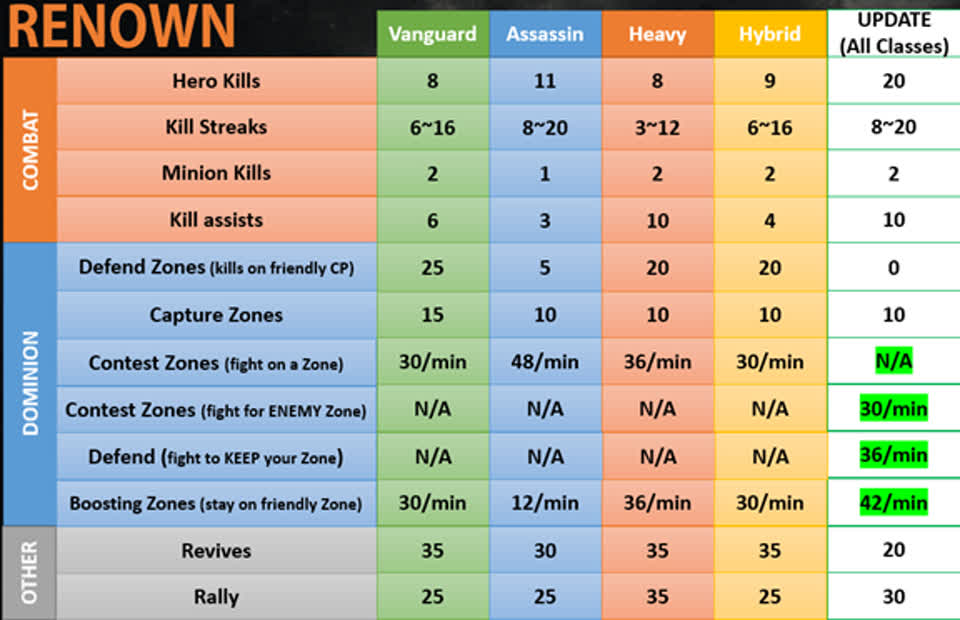 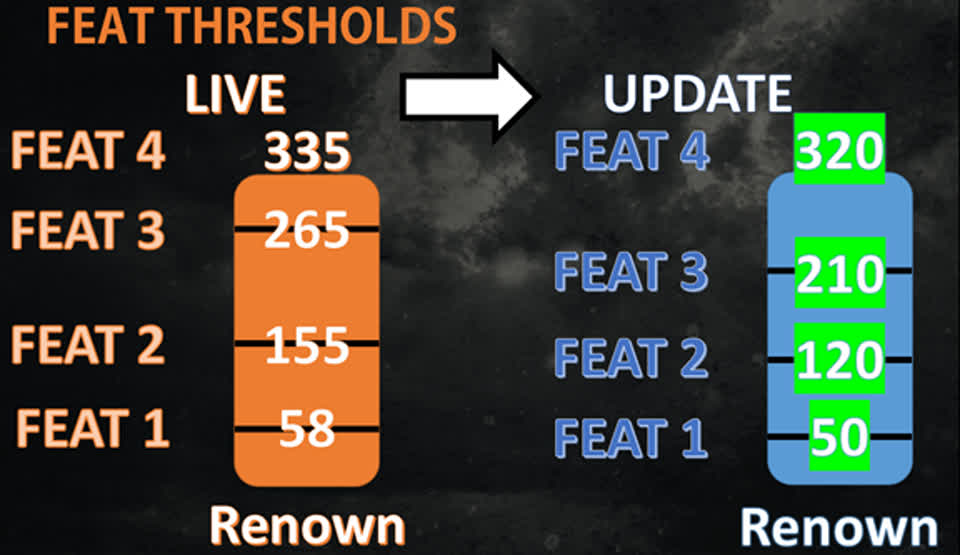 All classes will now make the same Renown for each action on the battlefield. This was the most requested change and, throughout all Testing Grounds, it has been found to be universally praised by players.

In addition, we're removing most of the special renown rewards that were handed out for several different actions and only keeping a select few. The hope is to make renown gains clearer across Dominion.

We're also adjusting the Renown thresholds at which Feats are unlocked to adjust to the massive reshuffle of Renown gains and to make unlocking each Feat tier progressively harder.

One of the main issues players reported with the removal of the Defender Renown bonus and symmetrical Renown gains when contesting was that attacking an opponent's Zone felt like too little a risk.

By also making Boosting a Zone worth more Renown per second, we're hoping to bring back a sense that protecting your Zone is still worth the investment and that succeeding in taking the enemy's is a risky, but worthwhile investment. 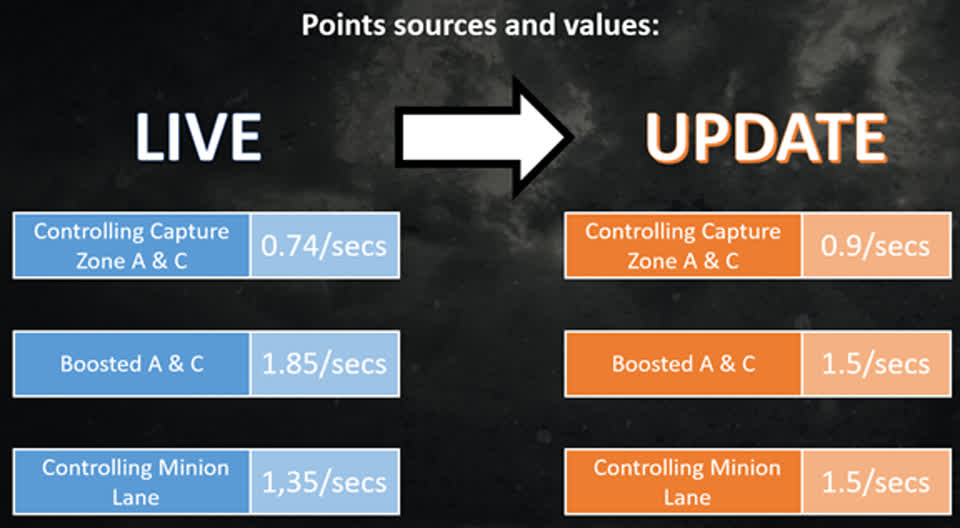 Reaching the correct balance of Point gains has been a challenge in the Testing Grounds, with our first attempt leading to matches that were clearly too short.

We feel we've attained a good balance in the latest Testing Grounds and hope the changes we've made to the Capture Speed and Renown rewards for Contesting/Boosting Zones will alleviate concerns that the Minion Lane was too rewarding.

On March 31st, the Testing Grounds' door will be open to all our players to test changes to Shaolin and a 2nd iteration of Conqueror. Let's look at what you can expect starting with Conqueror. 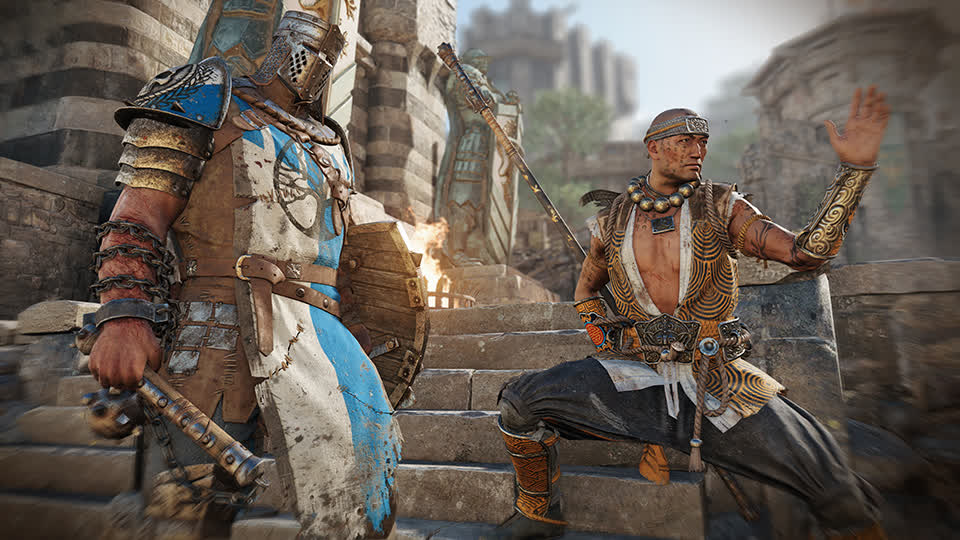 First, a quick recap of the last Testing Grounds for Conqueror. We gathered a lot of feedback from you, our players. Several changes were very appreciated, such as the ability to feint Heavy attacks, as well as the new recovery cancels into Full Block Stance, the new followups when blocking with Full Block Stance as well as after a Shield Bash, but the consensus was that the hero wasn't quite ready for release; there were issues with flickering with Charged Heavy attacks, the pressure from undodgeable Chained Heavy attacks was overwhelming, ganking potential that we did not intend as well as several other issues. This iteration Conqueror in the Testing Grounds aims to correct the direction we took towards making the hero stronger than on Live and less frustrating to play as and against while strengthening their identity as a shield-bearing hero and using it to further their offense.

As this is the 2nd iteration of Conqueror, we'll be skipping over the changes made in the first Testing Grounds; this will only cover what changed from the last Testing Grounds as well as new changes.

We've adjusted Conqueror's charged heavy attacks. While the ability to charge Heavy Attacks in chains was interesting, the end result is that it didn't live up to our expectations; they were too difficult to use and did not end up giving Conqueror enough pressure in chains, so we've removed the move entirely from chains. We've also adjusted the damage and the range of the attack; 32 damage was quite high, and the lower forward movement means that Conqueror can no longer fully charge heavy attacks and land them from off-screen, creating frustrating moments for players.

We've also adjusted Conqueror's infinite chain. Infinite Light attacks sound interesting and strong on paper, but in reality they are problematic; at lower levels, they overwhelm opponents and lead to overuse of Light attacks, while at high level they are reactable and too weak. Removing the option lets us address the situation - Conqueror now should use Heavy attacks in chains to pressure opponents.

The recovery cancel part of Full Block Stance remains, as it is an interesting defensive tool, but we toned down the capabilities of the move; cancelling it by a Dodge was too strong as it let Conqueror avoid mixups and made his offense too safe, and the recovery has been increased by a small amount to ensure that Conqueror isn't safe from dodge guardbreaks as well as shortening their attack recoveries by using Full Block Stance cancels.

With these changes, we're addressing a few parts of feedback we received. Conqueror's neutral game was too weak with Shield Bash at 300ms; there are no parts of the hero's kit that can mix up effectively at that timing, and players were able to easily bypass Conqueror's most potent opener. It is now the same timing as on Live; we know this works and is strong, so we're reverting the change. It is also usable after any Opener or Chained attack; this is important as Light Finishers do indeed chain to Shield Bash, giving Conqueror a way of pushing forward with offense after Light Finishers.

Flail Uppercut gave players some trouble; as a dedicated punish after Shield Bash that did not have a stance, and thus was impossible to parry, it created situations where multiple Conquerors had infinite combos together and could easily defeat players, trapping them in situations there they couldn't defend themselves. With Flail Uppercut no longer being Unblockable and having a Stance, it can now be blocked or parried under specific circumstances - the attack is still guaranteed after a Shield Bash, but only if your opponent did not receive a hit between your Shield Bash and Flail Uppercut.

Conqueror's game plan changes a bit with these changes; players have to be more proactive and make good reads to apply pressure on their opponents. Conqueror's offense now forces opponents to parry their chained attacks, otherwise they will be subject to even more mixups with Shield Bash, and all of Conqueror's offense leads back to more Shield Bashes. While their defense might not be as strong as it was, their offensive capabilities are greater than on Live, and they can apply pressure and force reactions out of opponents while in their chains.

The next hero we're looking at in this Testing Grounds is Shaolin.

Shaolin, despite being one of the more complex heroes, doesn't quite work as intended; the kit feels limited in what it can do, and while there are a lot of available options they do not pan out as expected due to multiple issues. We're looking to improve those issues and give Shaolin more flexibility and better flow to access these options in better, more effective ways.

Shaolin typically has difficulty opening opponents and going into Qi Stance, which is the base of the hero's mixup and offensive capabilities. We're aiming to make this better for Shaolin so that the hero can enter Qi Stance more reliably.

With these changes, we're hoping that Shaolin has a much easier time getting into Qi Stance; Top Light Opener being Enhanced ensures that even externally players have to commit slightly less to enter Qi Stance and makes it easier to initiate offense in 1v1 situations, while the Side Shadowstep changes ensure that Shaolin has a way to punish attacks while still applying pressure.

We're making big changes to Qi Stance Sweep. By moving it from a followup from Sun Kick to a followup to every Qi Stance attack and making it Feintable, we're giving Shaolin more flow opportunities in multiple situations; the flow from Qi Stance no longer needs to end after any Qi Stance attack, flows back into itself with a different kind of mix up, allows for easier ganking opportunities and lets Shaolin be dangerous when attacking externally.

With these changes we're hoping to make Shaolin more accessible and easier to play by making some of the more difficult inputs more lenient.

That's it for today! We hope you are looking forward to Testing Grounds later this season. For now, jump into the world of Heathmoor and enjoy the live changes to Dominion.

Until next time brave ones!