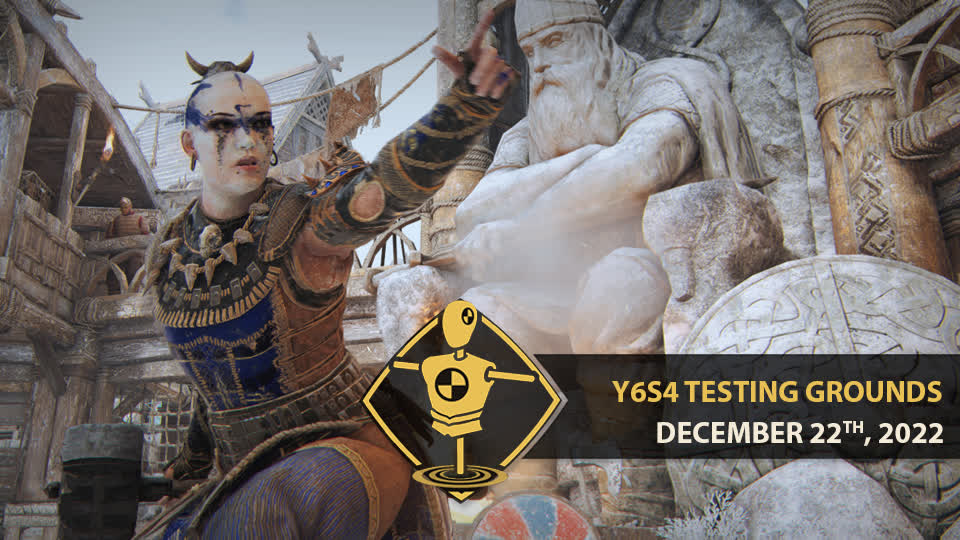 From December 22nd to the 29th, the gates to the Testing Grounds will open and everyone will be able to try out the changes to Jormungandr. Let's take a minute to go over what is coming up for our fearsome warrior.

Jormungandr's current identity is that of a stamina bully; the hero's game plan is to deplete their opponent's stamina, land specific moves to unbalance the opponent and land Hamarr Slam. The hero's entire kit revolved around that game plan, and while this works in certain situations, the power level isn't where it should be, especially considering the many improvements we've made to Stamina management since the release of the hero. For this revamp, we're refocusing the gameplan so that while Hamarr Slam is still an important piece of the hero while leveling up the other parts of the kit to make the hero viable in today's metagame, which is group-fight oriented.

Let's get into the changes themselves!

As we are changing the hero's stamina bully identity, we are also making changes to the hero's gameplan.

Since the hero's gameplan no longer revolves around stamina damage, we're adjusting this part of the hero's kit - this lets us focus on other areas and address one of the major pain points of playing with and against the hero.

While we are removing stamina damage and unbalancing opponents when they are out of stamina, we do still want Jormungandr to land Hamarr Slam, which is the hero's most iconic move. To this effect, we've changed Jotunn Farewell; the animation on the move is brand new, and it should now be the main way to initiate Hamarr Slam. The move is now slightly slower but feintable, which leads to better mixups and also helps with the hero's flow. We don't expect players to use Jotunn Farewell in every situation, but careful usage leads to big damage with Hamarr Slam.

Hamarr Slam is the big iconic move in Jormungandr's tool kit, but its usage is currently limited. With the new changes allowing the hero to unbalance more consistently and more often, the move must change to fit with the other improvements. We've lowered the damage of the move slightly as we anticipate it to land more often, and we've also removed the Uninterruptible Stance from it as it now has much greater potential to be initiated during team fights.

We're improving the hero's Heavy Finishers to be more consistent amongst stances, but also to emphasize the new identity as a hero who disrupts the battlefield; every Heavy Finisher now knocks opponents back and knocks them back further to get into even more favorable positions. Each knock back can wall splat, leading to extra damage, and giving Jormungandr even more options when using their Finishers.

To push the disruptor identity even further, we're adding new dedicated Guardbreak punishes to Jormungandr. These moves knock opponents back on hit, with the direction depending on which stance you hit them from, and can also give wall splats, similarly to their Heavy Finishers. It is important to note that you cannot hit opponents to go behind you, and that these moves do not unbalance opponents out of stamina, so Jormungandr still has choices: you can still throw backwards, or if your opponent is out of stamina you can throw them into a Hamarr Slam.

With these new options, Jormungandr has multiple paths to either landing Hamarr Slam, displacing enemies during fights to position themselves better and to get potential big damage off wall splats.

Jormungandr's flow is currently lacking on the Live version. The hero feels limited, has strict 2 hit chains, and very little in the way of flowing between different attacks. We're looking to improve the hero's flow, as it is an important part of group fighting; as we move more towards this type of meta, heroes need a good flow so they can defend themselves when outnumbered.

We've given Jormungandr a brand new Zone Attack performed in chains. The attack can be chained into from every one of Jormungandr's attacks except Hamarr Slam and itself, has Uninterruptible Stance at 100ms, deals good damage and can be feinted. Jormungandr can use this move in many different situations to extend their chains, to counter opponents trying to peel, and to be safer in group fights. Since it also initiates chains, you can use Jotunn Farewell after this move to mix up opponents.

By adding this move to Jormungandr's arsenal, we expect the hero to perform better in a variety of situations, and have better flow and options out of his attacks.

We're also addressing other parts of Jormungandr's kit to make the hero more efficient, less frustrating to fight against and to revamp some now obsolete parts of the hero.

The hero's Light Openers had a very distinct animation, which unfortunately made the attacks themselves predictable; opponents who are good at reading animation could tell if Jormungandr was using a Light or Heavy neutral attack and parry the Light attack on reaction. With the new visuals, the hero now swings the hammer instead of poking with it, making the attacks less obvious and more difficult to distinguish from their Heavy counterparts.

Jormungandr's Light Finishers previously needed to be Undodgeable to have a working mixup with the old version of Jotunn Farewell; as the mixup was meant to be a fast bash/Undodgeable mixup. With the new Jotunn Farewell that can be feinted, as well as better trajectories off the Heavy Finishers, the hero no longer needs this property on the attacks.

We're changing how Jormungandr accesses Jotunn Surge. The move was previously available by moving Backwards and pressing Guardbreak - this caused issues as it was reactable at high levels of play but too strong at lower levels of play. We've been slowly moving away from the 600ms neutral bashes like this for a while as we've found they are not effective as openers. By moving the move to a different place in the hero's kit, it should be better at opening up opponents, especially with the other changes coming to Serpent Smite.

We are improving Serpent Smite, which is the hero's Front Dodge Heavy, so that it performs better as a mixup tool with Jotunn Surge; with the new timing, Jormungandr's opponents need to decide if the hero will do a Jotunn Surge or a Serpent Smite, giving the hero more effective ways to open up opponents.

Finally, we've also updated both Jotunn Gift and Jotunn Grudge to deal direct damage instead of Stamina damage; we want players to be incentivized to use the moves as they trigger some of the hero's feats as we move away from Stamina Damage as an identity for the hero.

This is it! The revamp is extensive, features several new attacks and animations, an improved flow, and several changes to make the hero both more interesting to fight as and against. We'll be monitoring the usual feedback sources, and we look forward to your impressions!

Until then, see you all on the battlefield and have a happy holiday season!