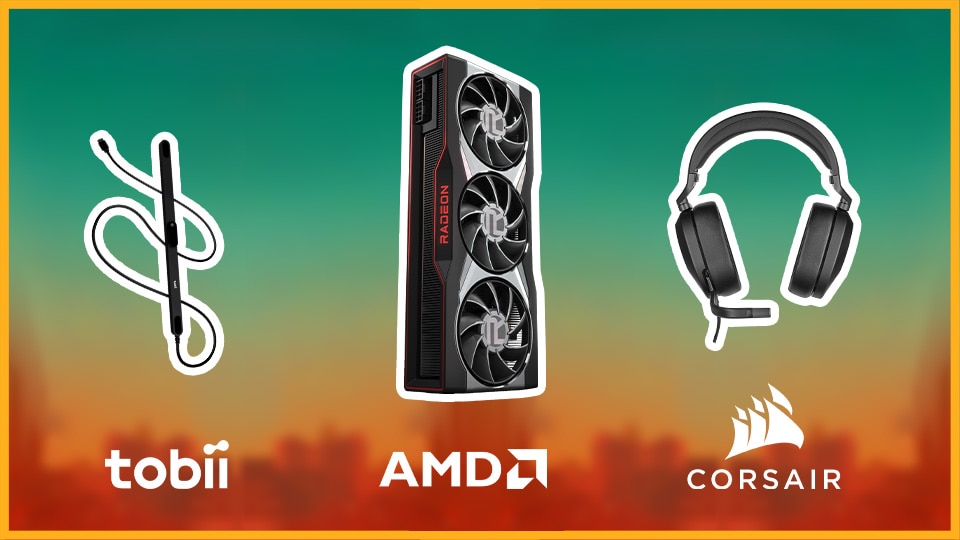 A copy of the Official Rules is accessible at https://farcry6.com/freeweekendcontestrules for the duration of the Competition.

Worldwide except Quebec and where prohibited.

IF YOU ARE MAKING A VIDEO FOR THIS CONTEST, MAKE SURE YOU HAVE ALL THE RIGHTS TO USE THE MUSIC INCLUDED IN IT IF THERE IS ANY MUSIC TO BE FOUND IN IT.

Sponsor will select 15 winners (the “Winners”) among all Entries meeting the Competition requirements, as follows:

Winners will be notified, as applicable, by direct/private message on the social media channel used to enter the Competition, within thirty (30) business days from the Winners selection process.

Only the Prizes listed below will be awarded in this Competition.

A PURCHASE WILL NOT INCREASE YOUR CHANCES OF WINNING.

Employees, officers, and directors of Sponsor and its affiliated companies, subsidiaries, licensees, franchisees, distributors, dealers, sales representatives, advertising and promotion agencies, and any and all other companies associated with the Competition (collectively, the “Competition Entities”), and each of their immediate families are not eligible to participate. Subject to all applicable federal, state, provincial, municipal, territorial and local laws, directives and regulations. VOID OUTSIDE OF THE TERRITORY AND WHERE PROHIBITED.

LIMIT: No other methods of entry will be accepted. By participating in the Competition, each Entrant, and Entrant’s parent/legal guardian, if Entrant is less than the age of majority in his/her country of primary residence, if applicable, (collectively “Entrant” or “You”) unconditionally accepts and agrees to comply with and abide by these Official Rules and the final and legally binding decisions of Sponsor. All entries are subject to verification by the Sponsor, which will determine in its sole discretion what constitutes a valid entry. Entries that do not meet the requirements specified below or otherwise do not comply with the Official Rules herein may be disqualified.

All taxes on the Prizes are the winners’ sole responsibility. Prizes are not transferable or redeemable for cash. Sponsor reserves the right to make equivalent substitutions as necessary. Prizes include shipping and handling costs to the Winners’ residence, where applicable. Odds of winning a Prize depend on the total number of eligible entries received. The Sponsor will not replace any lost or stolen Prize.

Prizes are provided “as is”. Entrants acknowledge that Competition Entities have neither made nor are in any manner responsible or liable for any warranty, representation or guarantee, express or implied, in fact or in law, relative to the Prizes.

Sponsor shall have no liability for any potential Prize notification not received by any potential Winner for any reason. In the event the Winner is a minor (where applicable), his or her parent or legal guardian must sign and return the documents described herein as necessary to claim a Prize, on behalf of the winning minor.

In the event of a dispute regarding who submitted an entry, the entry will be deemed submitted by the authorized account holder of the e-mail account specified in the entry or associated with the account used to enter the Competition, where applicable.

Failure to complete and return the documents in the time noted, or if Prize notification is undeliverable, will result in disqualification and an alternate potential Winner will be selected and notified, time permitting.

Acceptance of any Prize constitutes Winner’s permission for the Entities to use Winner’s entry materials, including video, name, pseudonym, photograph, likeness, voice, biographical information, statements and complete address (collectively, the "Attributes"), for advertising and/or publicity purposes worldwide and in all forms of media now known or hereafter devised, for five (5) years, without further compensation or authorization, and releases the Competition Entities from all claims arising out of the use of such Attributes.

If the Entrant is required to use a Ubisoft Account to enter the Competition, all materials submitted to Sponsor shall be considered as User Generated Contents in accordance with the Ubisoft Terms of Use. In any event, all materials submitted to Sponsor shall become the sole property of Sponsor and will not be returned or acknowledged. As consideration for entering and participating in the Competition, Entrant agrees that Entrant shall relinquish any and all rights to the materials that Entrant submits. Submission of an entry grants the Sponsor and its agents the right to record, copy, publish, use, edit, exhibit, distribute, perform, merchandise, license, sublicense, adapt and/or modify such entry in any way, in any and all media, without limitation and without any compensation to the Entrant. Submission of an entry further constitutes the Entrant's consent to irrevocably assign and transfer to Sponsor any and all rights, title and interest in the entry, including, without limitation, all copyrights.

Sponsor reserves the right in its sole discretion to disqualify any Entrant who is found to be tampering with the entry process, the operation of the Competition or to be acting in violation of these Official Rules.

During the Competition, Sponsor may, at its own discretion warn, disqualify or ban any Entrant, without prejudice for the Entrant, that notably (without limitation):

Entrant moreover agrees that Entrant shall not submit an Entry that contains (i) disparaging or obscene language, photographs or film (ii) nudity (iii) trademarks, copyrights and/or logos not belonging to Entrant and/or (iv) language, photos or film that is injurious to a third party and/or may damage a third party’s reputation. Entrant acknowledges that Sponsor expressly conditions its acceptance of Entrant’s submission on Entrant’s agreement of the foregoing, and if it is discovered that Entrant has violated such agreement, Sponsor reserves the right to disqualify Entrant’s submission.

Any entry deemed by Sponsor, in its sole discretion, to have been made on another’s behalf by any other individuals or any other entity will be declared invalid and disqualified for this Competition. In the event a dispute regarding the identity of the individual who actually submitted an entry cannot be resolved to Sponsor’s satisfaction, the affected entry will be deemed ineligible.

No incomplete, forged, software-generated or other automated multiple entries will be accepted.

Sponsor reserves the right to cancel or modify the Competition if fraud or technical failures destroy the integrity of the Competition, or for any other legitimate reason, as determined by the Sponsor, in its sole discretion, and to award the Prizes based on eligible entries received prior to the cancellation.

Entrant represents and warrants to Sponsor that his/her entry is, where applicable, (i) completely the original work of the Entrant and/or was written, created or filmed solely by the Entrant, (ii) not copied from any other source or previously broadcast or otherwise distributed or disseminated in any media or format, and (iii) not in violation of or conflict with the trademark, copyright, rights of privacy, rights of publicity or any other rights, of any kind or nature, of any other person or entity. ENTRANT AGREES TO INDEMNIFY, DEFEND, AND HOLD HARMLESS SPONSOR, THE COMPETITION ENTITIES, SOCIAL MEDIA PLATFORMS AND ANY THIRD PARTIES AFFILIATED OR ASSOCIATED WITH THE DEVELOPMENT AND EXECUTION OF THIS COMPETITION, FROM ANY AND ALL CLAIMS, DAMAGES AND LIABILITIES ASSERTED AGAINST THE SPONSOR, THE COMPETITION ENTITIES, AND THE THIRD PARTIES BY REASON OF ENTRANT’S PARTICIPATION IN THIS COMPETITION, INCLUDING WITHOUT LIMITATION (A) ANY BREACH OF THE ABOVE REPRESENTATIONS (B) CLAIMS FOR INJURY, LOSS OR DAMAGE OF ANY KIND RESULTING FROM PARTICIPATION IN THIS COMPETITION OR ACCEPTANCE, USE OR LOSS OF ANY PRIZE AND (C) CLAIMS BASED ON RIGHTS OF PRIVACY, RIGHTS OF PUBLICITY, FALSE LIGHT, DEFAMATION, COPYRIGHT AND/OR TRADEMARK INFRINGEMENT RELATING TO THE SUBMISSION OR EXPLOITATION OF THE ENTRANT’S CONCEPT.

Sponsor, the Competition Entities, Social Media Platforms and any third parties associated or affiliated with the development and execution of this Competition are not responsible for problems downloading or uploading of any Competition-related information to or from the website or for any other technical malfunctions of electronic equipment, computer on-line systems, servers, or providers, etc. that would prevent an entrant from submitting an entry or receive notifications from Sponsor or for any other mis(directed)communication which may limit an entrant’s ability to participate in this Competition.

TO THE EXTENT AUTHORIZED BY APPLICABLE LAW, ENTRANT HEREBY RELEASES SPONSOR, THE COMPETITION ENTITIES, SOCIAL MEDIA PLATFORMS AND ANY OTHER THIRD PARTIES AFFILIATED OR ASSOCIATED WITH THE DEVELOPMENT AND EXECUTION OF THIS COMPETITION FROM ANY AND ALL CLAIMS DAMAGES, LIABILITIES AND ACTIONS (“CLAIMS”) WHICH MAY BE CAUSED, DIRECTLY OR INDIRECTLY, IN WHOLE OR IN PART, FROM ENTRANT'S PARTICIPATION IN THE COMPETITION, INCLUDING WITHOUT LIMITATION CLAIMS ARISING FROM: (I) TECHNICAL FAILURES OF ANY KIND, INCLUDING BUT NOT LIMITED TO THE MALFUNCTIONING OF ANY COMPUTER, CABLE, NETWORK, HARDWARE OR SOFTWARE; (II) THE UNAVAILABILITY OR INACCESSIBILITY OF ANY TRANSMISSIONS OR TELEPHONE OR INTERNET SERVICE; (III) UNAUTHORIZED HUMAN INTERVENTION IN ANY PART OF THE ENTRY PROCESS OR THE COMPETITION; (IV) ELECTRONIC OR HUMAN ERROR WHICH MAY OCCUR IN THE ADMINISTRATION OF THE COMPETITION OR THE PROCESSING OF ENTRIES; (V) ANY INJURY OR DAMAGE TO PERSONS OR PROPERTY, INCLUDING BUT NOT LIMITED TO ENTRANT'S COMPUTER, HARDWARE OR SOFTWARE; (VI) RIGHTS OF PRIVACY, RIGHTS OF PUBLICITY, FALSE LIGHT, DEFAMATION, COPYRIGHT AND/OR TRADEMARK INFRINGEMENT RELATED TO ENTRANT’S SUBMISSION; AND (VII) ENTRANT’S ACCEPTANCE, USE OR LOSS OF ANY PRIZE. SOME JURISDICTIONS DO NOT ALLOW THE LIMITATION OR EXCLUSION OF LIABILITY FOR INCIDENTAL OR CONSEQUENTIAL DAMAGES; THEREFORE THE ABOVE LIMITATIONS OR EXCLUSIONS MAY NOT APPLY TO ENTRANT IN WHOLE OR IN PART.

You may contact us at https://support.ubi.com or by mail at the Sponsor’s address abovementioned should you have any question regarding this Competition.

Applicable Law. Except where prohibited, you agree that all issues concerning these Official Rules and the Competition shall be governed by the laws of France, without giving effect to any choice of law or conflict of law rules. Notwithstanding the foregoing, you additionally enjoy the protection afforded to you by mandatory provisions of the law of your country of residence.

Jurisdiction. Except where prohibited, you agree that any and all disputes, claims and causes of action arising out of this Competition or any Prize awarded shall be resolved individually, without resort to any form of class action. By participating in the Competition, you agree to submit any formal dispute to the non-exclusive jurisdiction of the courts of Paris, France, when the Sponsor is a French entity, or to the jurisdiction of the country where the Sponsor has its registered headquarters.

The use of any Prize manufacturer or venue, name or trademark in connection with any of the Prizes is solely for the purpose of describing such Prize, and is not intended to suggest any affiliation or sponsorship. The invalidity or unenforceability of any provision of these rules shall not affect the validity or enforceability of any other provision and these rules shall otherwise remain in effect. Nothing in these Official Rules shall be deemed to exclude or restrict any of the winner's or the entrant's statutory rights as a consumer.