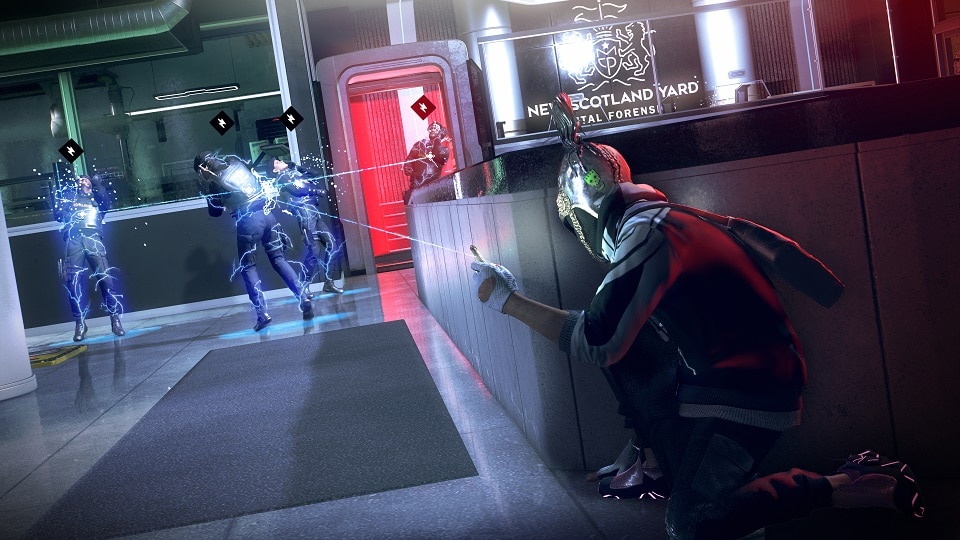 What Kind of Watch Dogs: Legion Player Are You?

Watch Dogs: Legion offers virtually endless combinations of recruits, gadgets, upgrades, and weapons, allowing you to play the way you want. To start you off on the streets of London, Game Designer for Gameplay Mathieu Berube has some tips for optimizing your character builds to best suit your play style.

Every mission in Watch Dogs: Legion presents options for different types of players. Before you start piecing together your builds, first identify the play style that best describes you in the three infographics below: 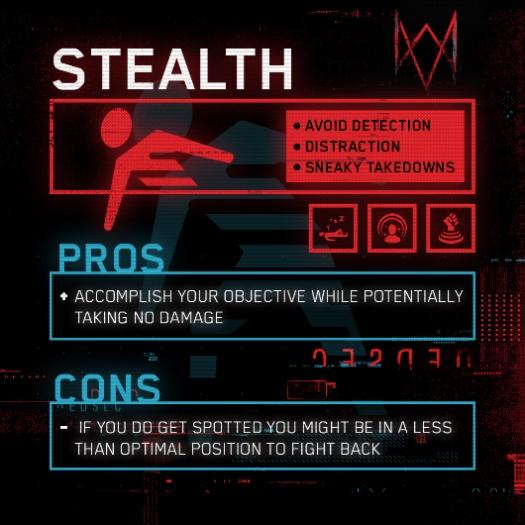 STEALTH: A stealth-focused player thrives on infiltration, making use of gadgets, weapons, and silent takedowns while avoiding detection and direct confrontation with enemies. 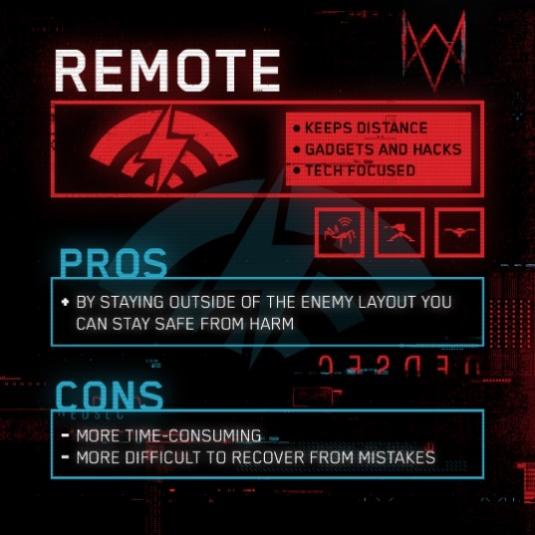 REMOTE: Remote players rely heavily on tech to help them achieve their objectives. Using different combinations of hacks and gadgets, they remain outside of enemy sight as much as possible while attacking, creating diversions, and infiltrating by proxy. 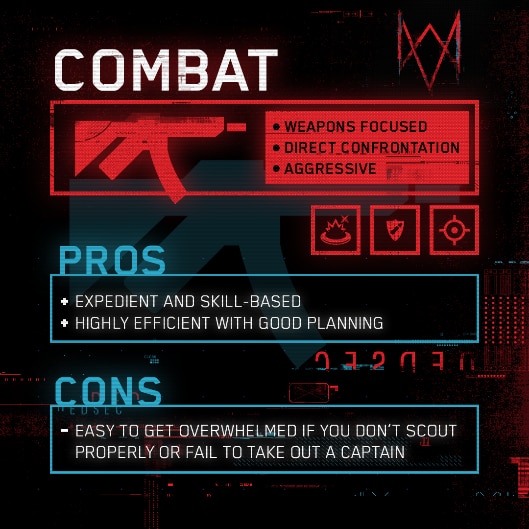 COMBAT: Combat-focused players are the ones who enjoy running in guns blazing. They’re aggressive and forward, pushing the pace with brute force and defeating enemies by out-gunning and/or out-punching them.

To help you maximize your characters, here are a few example builds we love that will combine weapons, gadgets, and abilities to best suit their respective play styles:

The main advantage of the stealth play style is your ability to accomplish your objective while potentially avoiding arrest, injury, or worse. However, if you do get spotted, you might be in a less-than-optimal position to fight back. In this event, having strong improvisational skills will be vital to survival and success.

The Spy brings in a powerful Silenced P9, allowing you to fire on enemies while avoiding detection. The fully upgraded DedSec Pistol is also silenced, making it a great stealth tool for taking out drones. A fully upgraded AR Cloak makes the user invisible, allowing them to slip by undetected, close in on isolated guards, and perform sneaky takedowns. The Disrupt hack also has the ability to interrupt enemy detection when used in time. Also, make sure to have the AR Shroud upgrade, which allows you hide enemy bodies you’ve taken out, as well as the Attract hack to manipulate enemy positions for optimal stealth play. The 1st tier of hacks for drones and turrets is a must have so you can Disable them temporarily, before closing in and performing permanent Deactivations if you have the right upgrades. Should you get spotted, focus on using the Spy Watch to jam the weapons of everyone in range as you vanish from sight with the AR Cloak and re-position to try a new approach.

Safety is the main advantage of the remote play style. Because you’re only interacting with enemies through hacks and devices, the risk of injury, arrest, or death is much lower. However, it’s a bit more time-consuming, requires patience, and recovery from mistakes can be a challenge. Also, not all objectives can be done remotely, so you’ll want to have backup plans and expect to step in from time to time.

Using a Hacker for a remote build is ideal due to their Key Steal ability, which allows the player to download digital keys from any distance. Using the fully upgraded Infiltrator Spiderbot allows you to sneak around an area and perform spider takedowns while using the Attract and Disrupt hacks to avoid detection and disruption. Keep an eye out for construction drones too, as you can make use of them in combination with your Infiltrator Spiderbot to reach higher areas, or to get the drop on enemies from up high (jump on drone as the spider, then hijack it). You don’t have to play this build in a stealth way all of the time either; having access to the 2nd tier of hacks for drones and turrets gives you the option to Hijack those enemy units and wreak havoc against the enemies in the area. When the objective does force you to go inside the layout, make use of solid close-range upgraded weapons like the DedSec SMG and the LTL SG, spread your hacks to multiple targets using Viral Hacking, and finish off the rest of the enemies.

Running in guns blazing and confronting enemies head-on is certainly the fastest and most direct approach to clearing out enemy camps. However, it being the fastest approach doesn’t necessarily make it the safest. A combat-focused player risks being overwhelmed by enemies and potential reinforcements by running in and making snap judgements. Make sure to thoroughly scout locations before attacking, prioritize targets, and minimize risk by making good use of cover.

Melee combat-focused players also have a unique advantage with enemies. When engaged with melee combat, enemies will only fight back with non-lethal weapons, reducing the risk of death for close-range fighters.

This combat build is focused on giving you the ability to move about during a gunfight while maintaining a high degree of lethality with your Desert Eagle and G36. The Hitman’s abilities let you mitigate damage while closing in on your enemies by doing Combat Rolls and doing Gunkata takedowns as soon as you are in range. Make sure to have the Skin Mesh upgrade to help soak some damage, and make good use of hacks such as Disrupt and Gun Jam to create pauses in your enemies’ firing patterns. Deploying your Combat Spiderbot helps by giving your enemies another target to aim at, often giving you a window to close in and engage. Additionally, having access to the 3rd tier of hacks for drones and turrets will make enemy units fight on your side for a set time thanks to the Betray hack.

This combat build is set up to help you engage with large amounts of melee combatants. Finding the right Bare Knuckle Fighter is the key here (hint: go through the BK arena at Nine Elms). Shockwave Strikes let you focus on a single opponent, while your combo enders and melee finishers stagger nearby enemies. A fully upgraded Electro-Fist is excellent for crowd control and can be used quite often thanks to the Kinetic Charger, which speeds up the cooldown of gadgets with each melee strike. To top it off, add in Skin Mesh for extra damage resistance. The Disrupt hack is extremely useful for stunning tougher enemies or putting a stop to gunfire, and make sure to have the 1st tier of drone/turret hacks so you can Disable them before they open fire on you. If you end up in a gunfight, you can rely on Tear Gas grenades to help you stun your enemies and make melee more accessible.

These are just a few of the builds that we recommend. With so many options, you’re sure to create some of your own unique combinations and preferences. While you’re playing, you might even find that your favorite play style changes as you experiment with different weapons, gadgets, and recruits. 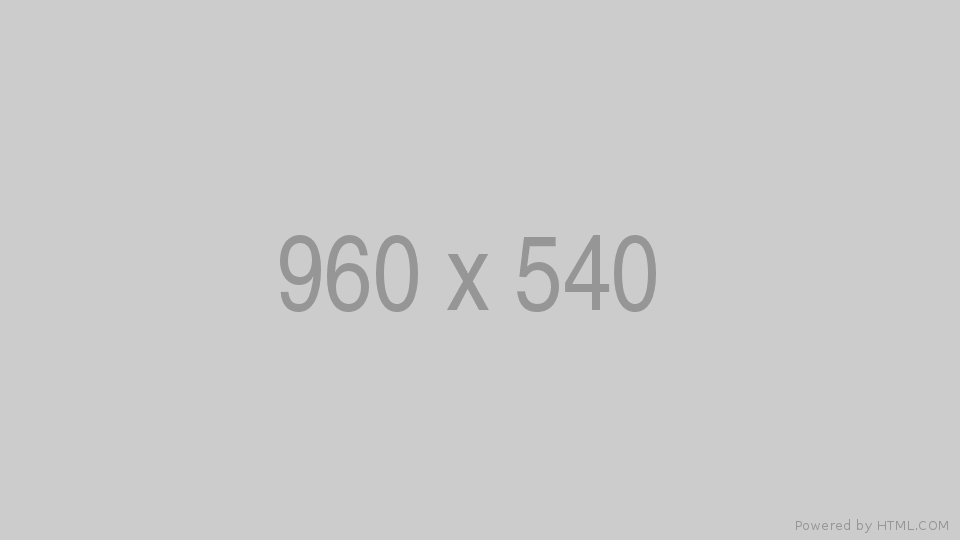