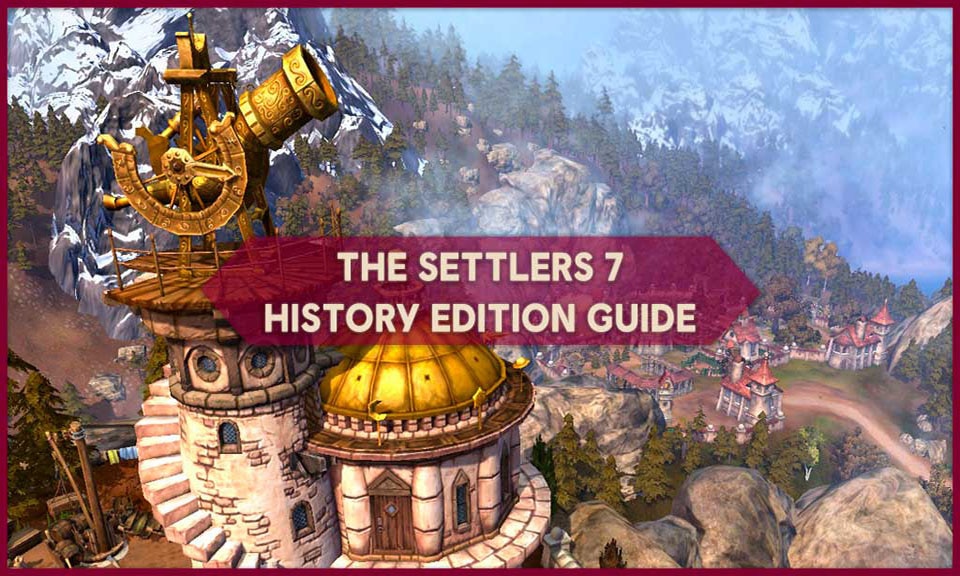 [Guide] The Settlers 7 Paths to a Kingdom – History Edition

Today we want to look at the last part of the History Collection: The Settlers 7!

This part features much more complex economic cycles than the previous two The Settlers games and brings a pinch of innovation using sectors and victory points to the The Settlers world. The map “River town” is great for a particularly easy start – in addition to the campaign.

Choose the AI “Countrybumpkin Rupert” with “Easy” level for an easy start.

As you will see, you already have two sectors at the beginning. This solves the lack of space problem for a while, something with which one always has to fight in The Settlers 7.

We now begin with the classic start strategy in the first sector, constructing a lodge, to which we attach a woodcutter, a forester and a sawmill. A second lodge is needed to build a hunter. More than one hunter would be too much for the small amount of wild animals in the starting sector. Now set the food in the hunter’s lodge to “fancy food” – more to that topic later in the expert tip at the end of this guide. Tip: Once you raised these buildings, it is advisable to set the work area for both the forester and the hunter so that they know where to work.

Next, you should build a mountain shelter with three quarries at the stone deposit. In contrast to the hunter you cannot build too many miners – the more you build the more you get.

To make use of the goods from the hunter, build your first noble residence to which you attach two butchers and provide them with “fancy food”.

Below your castle is an idyllic riverbank with fishing grounds. We would like to use this but first need to construct a way there. Since the road to the water is very long, you should build a storehouse midway. Between them walk carriers, who frequently take the goods from one storehouse and bring them to the next. However, a storehouse always houses multiple carriers (and can be upgraded later), so you need significantly less of them.

Tip: In order to ensure an efficient economy, you should always build storehouses in the middle of a sector and on the borders between the sectors. In particularly large sectors, more storehouses may be required. Afterwards you can build a lodge with three fishers at the fishing grounds. In order to get the bread production going as well, you need 1-2 grain barns (they need a lot of space for the fields!), a windmill and a bakery.

With the help of “prestige” you can unlock new buildings in The Settlers 7. For the next prestige level you are missing two prestige points at the beginning of the game. Build two large prestige objects (they only need stones) and you can unlock your first prestige option.

As reward you should choose the option to unlock the stronghold, export office and church now. This decision essentially determines which economic branch you have to focus on in the following game! In this guide we decide in favor of the church and build it at a place where we have plenty of space (!). The second of your two sectors works best here.

So, why do we need so much space? You can add prestige extensions to the three special buildings and they are much cheaper than the normal prestige objects – but they need a lot of space. However, make sure that the construction of the special building does not block the rest of the economy. Use the logistics view, if you want to change the building order:

You have 10 coins at the beginning. You can use these to recruit soldiers without having any barracks. Hire two pikemen and one musketeer in the tavern and assign them to your general.

Together with the four soldiers you’re starting with you now have 7 soldiers, which is enough to take the two adjacent sectors in the North West and South East. With the help of these sectors, you can mine iron ore and coal to process it in an iron smelter. Build three buildings per raw material. With a well-organized arrangement, the existing space is enough: Remember to use geologists in the mines later to revive depleted deposits!

First, use the raw materials for the construction of tools. You should set the toolmaker’s working option to “On Demand”. Otherwise, you will soon have a tool overproduction and take away the resources from the blacksmith.

In general, there are some important points for sector capturing: A perfect economy in Settler 7 means to count!

In particular, you can optimize food production with counting. An example based on hunter / sausage production:

If you calculate all six possible combinations, you will see that the best result is achieved, if hunters and butchers are set to fancy food exactly as we did in our guide:

Hunters and butchers on “fancy food”:

Thank you to haep for creating this fantastic guide!