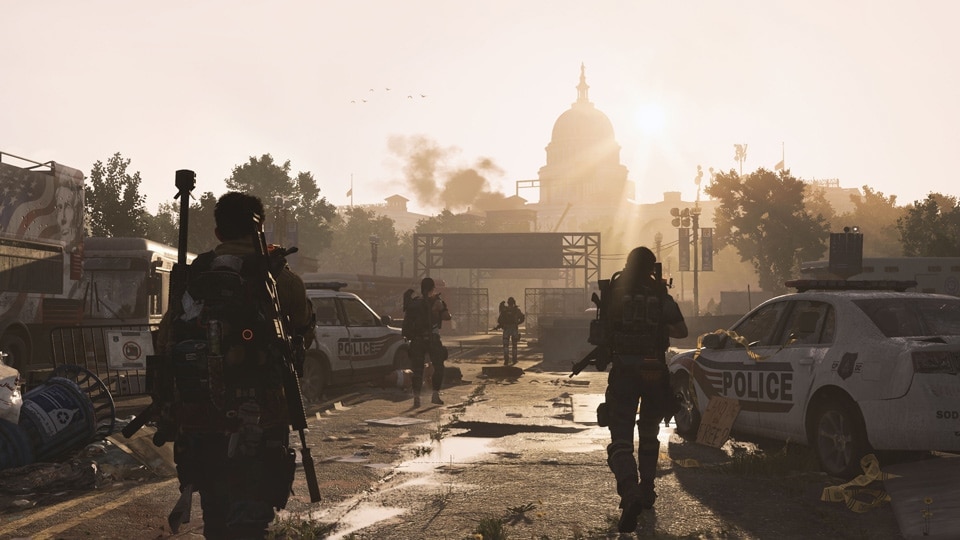 Intelligence Annex: The Living World in The Division 2

Intelligence Annex is back today, this time detailing the living world of Washington, D.C. in The Division 2. Our goal for the sequel was to create experiences for you as the player that would not only surprise you but also keep you coming back for more. To achieve this, we developed our "Living World Simulation"—a series of rules that allow all activities and encounters in the open world to spawn systematically. Your open world adventures will be both unique and dynamic in The Division 2, encouraging travel and exploration as a result.

The Division 2 takes place seven months after the events that transpired in Manhattan. While you were cleaning up the streets of New York, D.C.'s civilians have been left to their own devices. Those who have survived the initial outbreak did not wait for a rescue operation. They banded together as factions, collecting resources and building settlements—all in an effort to defend their keep against opposing factions. Friend or foe, all factions have needs that must be met for survival and will stop at nothing to achieve these needs. This results in faction against faction territory wars–the foundation of The Division 2's living world.

Control Points are strategic locations where factions, friendly or hostile, stockpile resources. When a particular faction holds these points, they carry out a variety of activities necessary to sustain the point itself. If a point is low on food, for example, the faction will send scavengers out into the open world to gather resources. This creates an opportunity for other factions to eliminate the convoy and take the supplies to fit their own agenda.

With Control Points scattered throughout the map, plenty of movement and activity is generated for you as the player. Should you intervene in friendly faction affairs, you may find yourself training recruits or gathering supply drops near Control Points. If the point is hostile, you will be tasked with rescuing hostages or removing enemy threats from the area. Should you choose not to intervene, you can witness civilians and enemies clashing as they travel in and out of Control Points to perform these activities themselves.

The Division's High Value Targets system is returning, new and improved, in the form of Bounties. This time around, bounties are not only hand-crafted but also procedurally generated. When choosing a specific bounty, the faction ringleaders associated with that bounty select a location fitting to the abilities of the squad that accompanies them. These bosses have been busy building their own agenda, which includes eliminating Division Agents like yourself. As a result, they may also have access to SHD Tech and all the abilities that come alongside it. As bounties increase in difficulty, the leaders will be accompanied by larger and more well-equipped squads and can even roll deep with additional bosses!

Projects take the Assignments system from The Division and rework them into a feature that emphasizes the dynamic nature of the open world. Earned early on in the leveling experience, Projects are calls-to-action by Settlement Leaders and the Division Coordinator as you explore D.C. Ranging from completing Challenging missions to emoting with other players, there is a variety of means that you can have a hand in civilian affairs and be rewarded for it. Completing Projects rewards blueprints, mods, crafting materials, experience, and bounties!

To learn more about bounties and projects, check out our Intelligence Annex.

Throughout the campaign, the factions will develop deadlier Elite Activities which provide high-risk, high-reward opportunities for enterprising agents. However, even these will not prepare Agents for the Black Tusk invasion.

Upon reaching end game, the rules will change. A new faction, the Black Tusk, invades the world triggering a variety of open world activities. In addition to the usual faction activities, Black Tusk launches operations unlike anything previously seen: Warhound Convoy, Settlement Blockade, and Aerial Surveillance. You might find a flying Drone patrolling the streets, or a robotic Warhound carrying supply crates to areas in the world. Depending on your loadout and gear score, these activities can be either a threat or an opportunity. We will not spoil too much here; we will leave the rest up to you!

Beyond that, the Black Tusk invasion forces the other factions of D.C. out of their strongholds. Control Point ownership becomes entirely dynamic with the settlements and the factions launching attacks on Control Points all across the city. Even the strength and rewards of Control Points become dynamic. Defeating hostile activities launched by faction Control Points causes them to concentrate their forces and raise the defense level of the Control Point. High-level Control Points store more valuable gear in their heavily-guarded supply rooms.

Overall, we want your actions in The Division 2 to serve a larger purpose, and we have built the experience from the ground up to support just that. We are excited to hear your thoughts with The Division 2's launch on March 15th!

Thanks for checking out our Intelligence Annex, and be sure to keep an eye out for future devblogs!