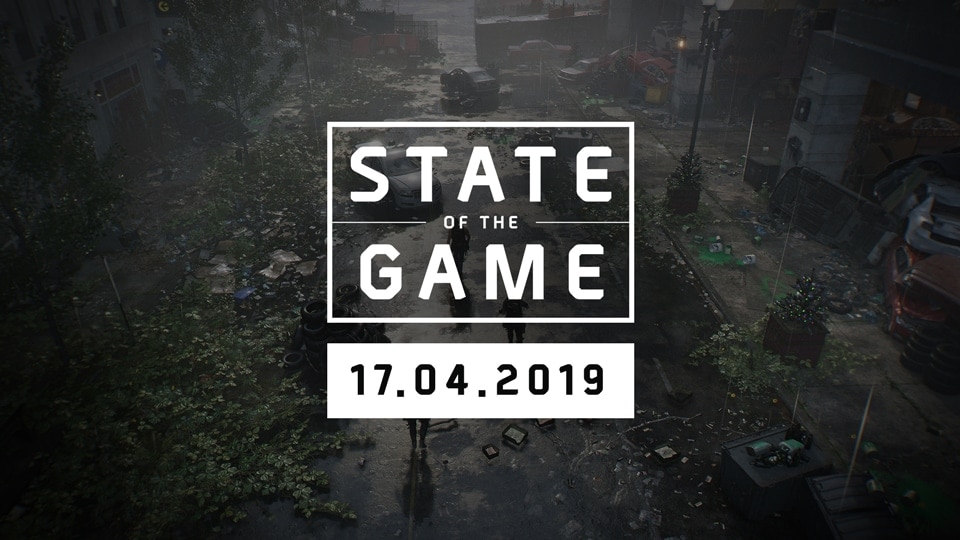 Welcome back to State of the Game! Our weekly broadcasts are still ongoing on our streaming platforms, but our weekly recaps have returned for players who prefer a one-stop-shop for all things The Division 2. If you're new here, strap in!

Hamish is back today with guests from Red Storm Entertainment—Creative Director Terry Spier and Game Systems Engineer Ryan Liebscher—to discuss several changes coming to PVP and the Dark Zones with Title Update 3.0. We also have an update on Title Update 3.0's release date.

The release date for Title Update 3.0 has been moved from April 25th to May 2019. This includes the raid, Operation Dark Hours. We understand everyone's excitement and anticipation for the first raid coming to the franchise, but we want to ensure the best player experience possible. As a result, we will be taking some extra time to tune the balance for TU3 and appreciate your patience during this period.

In the meantime, the PTS for TU3 is live now until May 2nd! As a separate client from the regular game, the server exists only for testing purposes, and nothing you do there carries over to the live game. It's also periodically reset, so no character progression is saved once the server is brought down. This is an awesome opportunity for us to collect community feedback, so please leave it for us on the forums! Lastly, there are some things to remember:

Finally, we wrap up today's news with a QnA on upcoming PVP changes with Terry and Ryan from Red Storm Entertainment:

Q: What changes have been made to normalization and why were these changes made?

A: All players will be normalized to Max World Tier (GS 500). This translates to Skill Power mods being active during normalization. We are happy to make adjustments to our normalization as our game evolves so that players can enjoy their build choices, feel their power, and still have a fair experience.

Q: What changes are coming to the PVP Damage Modifiers?

A: We want to remind everyone that we are doing separate balancing for PVE and PVP. The PVP damage modifier has been tuned from 70% to 40%, allowing players more time to react in engagements. We are increasing skill damage modifier from 20% to 25% to give skills that extra punch. Weapon archetypes are also being tuned specifically for PVP.

Q: Critical and Headshot bonuses have been removed when hipfiring in PvP (but is still applicable in PvE). Why was this change made?

A: We are seeing player behaviors involving hip fire move in a direction that we do not care for. We opted to make hip fire less attractive in PVP, while not touching its effectiveness in PVE.

Q: What changes are coming to the Dark Zone?

A: First off, we are removing the Rogue cooldown to allow players to readily sync to their group when Rogue. Keep in mind there's still a toggle cooldown. We are also retuning loot ratios in the Dark Zones, translating to more contaminated loot. Named bosses will always drop contaminated loot, and the contaminated bag space is being increased to six. With revamped Dark Zone Perks coming, this can be increased to 10.

Landmarks will now be on a short cooldown to promote movement around the zone. Previously, we found players completing the same landmarks on a recurring frequency.

Perhaps the largest addition to the Dark Zone is that items can drop up to gear score 515. This creates an opportunity for players to play the Dark Zone to slowly increase their gear score.

Finally, players can weapon swap in Thieves Den to earn Special Ammo for the weapon of their choice.

Q: What changes have been made to NPC damage and armor and why?

A: We were not happy with DZ difficulty at launch. With the update to the normalization scheme we took the opportunity to tune the AI difficulty to feel much closer to other Challenging content in the rest of the game. Essentially, they will dish out less damage, but take a little longer to kill. Less lethal from the get-go so players have time to play. While digging into this we found and fixed a bug which was causing armor values on AI in the DZ to be scaled incorrectly.

Q: What about the Occupied DZ?

A: We've added an ODZ specific PVP modifier, but it's currently tuned to the same global PVP modifier. This translates to a great opportunity to tune this value as needed in the future.

In addition, we are reducing EXP loss upon death and removing the number of AI patrols to promote more PVP encounters.

Finally, we are happy to announce that Manhunt and Rogue statuses will be added back to the ODZ in a later update. We heard community requests for that nostalgia to return, and we'll update you when that change is implemented.

Q: Are there any changes to Conflict?

A: Absolutely. Player armor bars will properly reflect the value of armor you have. Boost lethality is being reduced by 50% to align them more as a tertiary objective.

Team spawns are being synchronized to promote waves of teammates entering the fight together.

A: We are buffing damage across the board for all exotics in PVP. The Pestilence is included in this list, but we want to remind everyone that Exotics are not exclusively designed to output raw power. Above all else, we want them to be fun to use.

Several gear and weapon talents have also been tweaked. You can check out the full list in the VOD. For a full list of features, be sure to check out the Title Update 3.0 Patch Notes coming closer to release.

We are very much looking forward to the future with Title Update 3.0. and we are excited for players to get their hands-on things early with the PTS. There's more coming in the future, and we want to say thank you for everyone's passion and comments!

As always, be sure to join us over on the Official Forums, Discord or community Reddit if you're looking for a place to discuss all things related to The Division.