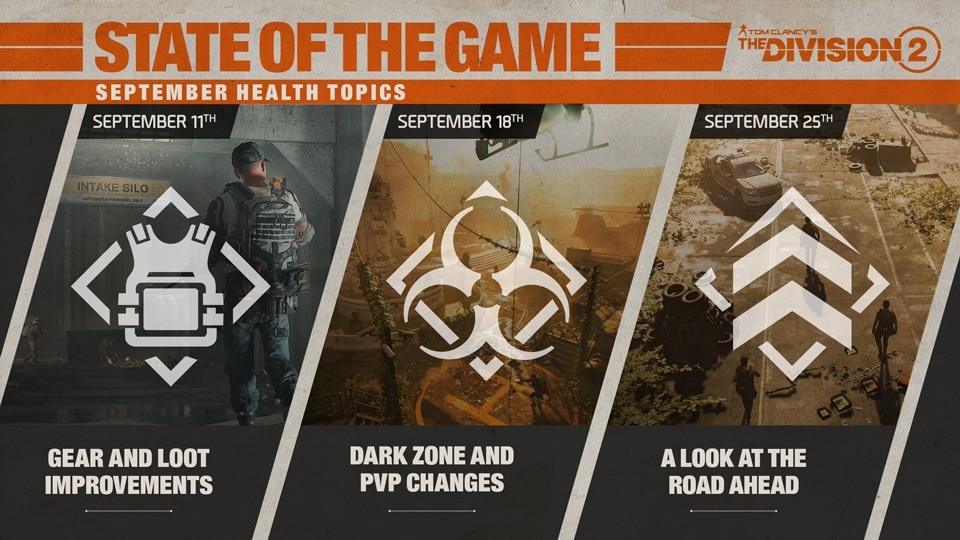 While the return of State of The Game was postponed to next week, we still wanted to share the contents of the show and detail what you can expect for our upcoming September livestreams. The team is working hard behind the scenes on the next Title Update, and we want to share a schedule with our community.

Elite Task Force Echo is active and underway at Massive in Malmö, Sweden. We received a lot of applications, and the team is very excited to see how engaged the community is with all things ETF!

Currently, the developers are working closely with a group of players selected to represent the various playstyles within the wider The Division community, including PvE, PvP, group play and solo players.

We are presenting some of the changes we have planned and detailing their feedback and suggestions in response to these changes. This workshop is a part of an ongoing effort of community involvement in the future of The Division 2, supplementing our existing feedback channels such as the official forums and the community sub-reddit.

All members of ETF Echo are under NDA, and so they will not be spoiling any of the discussions here at Massive.

There is a strong focus on the health of The Division 2 in these workshops, with some on the changes and improvements being discussed during upcoming State of The Games:

We are looking forward to the upcoming livestreams and hope to see everyone there!