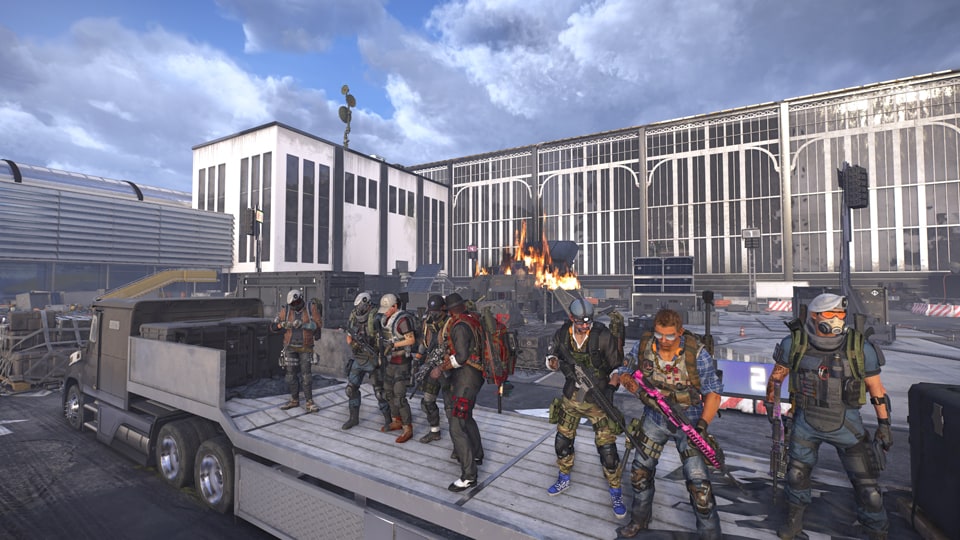 This month's clan spotlight focuses on a clan that some The Division players might recognise, mostly for their iconic logo but more importantly for their helpful presence in the community; The DivisionUK [DUK].

Our lovely DivisionUK [DUK] founders share their story, goals and aspirations for the future; as well as the origin of their [DUK] logo.

We hope you enjoy this month's Clan Spotlight!

For anyone who do not know DivisionUK [DUK], can you introduce yourself and your clan?

M_Blue: I'm Mike, Lead Admin with DivisionUK and been a member since February 2016 . I've been gaming for what seems forever now and enjoy most types of games but particularly third person shooters . I mostly play on PS4 but have lately started to game on PC as well .

Rogue Van Damme: Admin and Xbox Clan Leader. My name is Derek & I am a 38 year old gamer from Ireland. I've been gaming for almost 30 years and enjoy playing games from all genres.

My main platform is Xbox One & I also play on PS4. My favourite games are third person shooters and I enjoy PVE & PVP in equal measure. I joined the DUK Clan in March 2019 and look after the members on Xbox. The main activities I play on Division 2 are the Raid & DZ.

EnPee75: PS4 Clan Leader. Been gaming all my life but it's always had to take a back seat to other things. Former XBOX gamer but after hearing everyone at work raving about Division on PS4 I bought a PS4 so I could get involved.

When they all drifted away after a couple of months I kept playing and looked for a clan as I prefer to play in groups.

First clan I tried was DUK and haven't looked back since. - Enpee75

Can you share the story of how DivisionUK [DUK] began?

M_Blue: DivisionUK was founded in February 2016 after a group of PS4 Destiny players, hyped by the 2015 E3 presentation for The Division, formed a separate group purely for The Division.

In the early days, we used an app similar to Discord to coordinate our game nights and share information regarding the game. Back then, there were just a few of us and we kept the group closed until we decided to expand our membership and advertise our group on Ubisoft Forums and Twitter. Our numbers soon grew due to the popularity of the game.

DivisionUK [DUK] started out on PS4, how did it evolve into a multi-platform Clan?

M_Blue: As our membership numbers grew, we knew we had something special going and decided to open up the group and expand to cater for all three platforms.

Sharing our knowledge with others and wanting to learn from them. Being console players, the app we used was ideal, but hindered the PC members as it was not desktop friendly.

It was at this point we made the decision to switch to Discord and so a new chapter in our lives began, just in time for Division 2. - M_Blue

Both your Clan Logo and name (DUK=DUCK) is quite distinctive and familiar; can you share the background story of how they link together?

M_Blue: The original members came from a Destiny clan as I have mentioned previously, and their clan tag was DUK for Destiny UK as well, which also featured a (DUK=DUCK) as a logo. It felt right to carry the tag over, as that was our heritage. Our DUK had to be different though and take features from the Division game, such as the Beanie and ISAC orange ring in the background. I am pleased with how it turned out and how recognised it is within the Division community.

Enpee75: We are a proper community that look after each other, some of our members have been through some terrible times and everyone is there for them; whether it is a shoulder to cry on or just someone to run with and help take their mind off whatever is going on in real life.

Rogue Van Damme: Our clan in inclusive and we welcome members from all backgrounds. We treat everyone as part of the DUK family and with respect.

Enpee75: To continue to grow our community and support each other through new content.

M_Blue: As long as people play the game and want to group up we will be around. Through new content from the game we will look to expand our membership and continue to grow and welcome new members.

M_Blue:One of the best feelings when we first cleared the raid, going in blind the night it dropped and trying to work out what was required. We did not complete it that night, but we tried and tried again and it eventually clicked.

I do not often shout at the game screen whilst playing but I did that night once we completed it, it is such a fantastic feeling to overcome obstacles with a group. – M_Blue

M_Blue Raiding. Teaching the raid to newcomers and helping them achieve their first clear. To see a group who you have shown how to complete the raid go and form their own raid team and complete it together is rewarding.

M_Blue: We cover pretty much all activities in our group but the one thing the majority really miss from Division 1 is Survival!!! We often go back for old times' sake and revisit those memories. To bring it to Division 2 in the same format would be the icing on the cake for us.

Our Discord is open to all who wish to join; we look forward to welcoming you to our Discord or you can also contact us through Twitter for more information: @Division_UK.

The Division community as a whole are a very passionate bunch and one of the greatest gaming communities I have had the pleasure to be a part of. - M_Blue

However, at times there can be a level of toxicity that I've never experienced before within a gaming community. It is very disheartening to see this and although things do not always go the way we want, I do believe our best interest is at the heart of the dev's, as they continually try to improve the game we have come to love.

Associated Clans: We have recently started a separate group to celebrate Ubisoft's release of Ghost Recon Breakpoint as quite a few of our members also play this title. We have a separate Discord for this and you can find us at, of course with a separate group comes a separate logo:

Thank you to the founders and members of DivisionUK [DUK] for taking the time to share their story with us and the community. Check out their Discord if you want to join them and explore D.C. together!

If you would like to share your Clan's story with us and with the community, let us know what your Clan has been up to using the hashtag #DivisionClanSpotlight. You could be featured in our next Clan Spotlight!