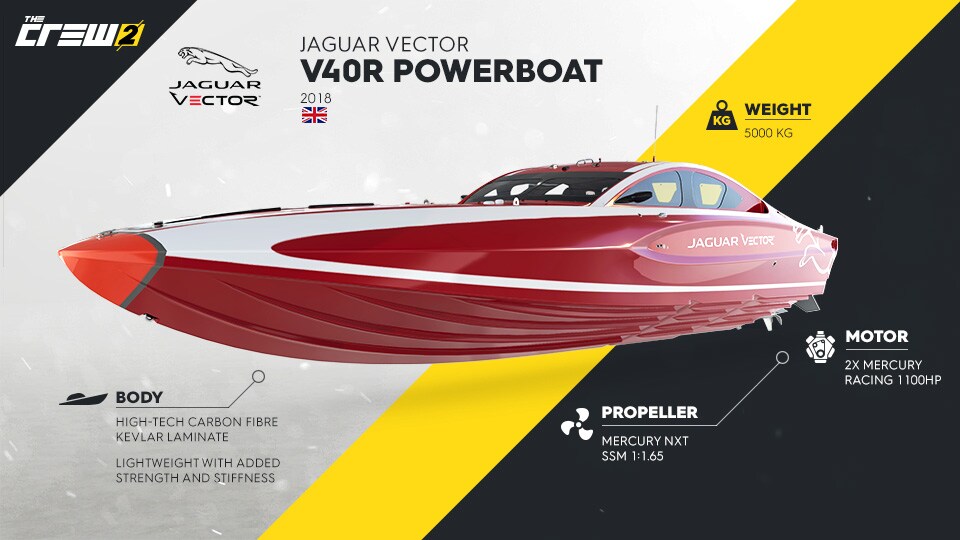 Tame the waves with the Vector V40R in the Crew® 2!

This week in the Motorsports Vehicle Series, we’re studying a star contender that’s sure to stir things up in the Pro Racing family: the 2018 Vector V40R powerboat!

Initially unveiled in 2014, the first V40R model quickly established itself in the world of powerboat racing as a force to be reckoned with.

Boasting twin Mercury Racing engines for a whopping combined 2200bhp at 6500rpm, this aptly titled “queen of the seas” is a masterclass on the positive impact recent advances in technology have had on design and performance.

The V40R uses a high-tech Kevlar / Carbon Fibre laminate, which keeps the craft lightweight while also adding strength and stiffness. Add the raw power of its engines, and you have a combination that neither storms nor high seas can stop.

Such quality has earned Vector a prestigious partner for their racing team, in the form of renowned British brand Jaguar. Together, they’re poised to push the boundaries of performance and technical excellence, carrying Jaguar Vector Racing to new heights.

Only the most skilled powerboat pilots will get a chance to put this beast to the test. Be sure to stop by the Pro Racing HQ to see if you have what it takes!

We hope you’re as excited as us for this addition to our The Crew 2 line-up! Tune in next week for the following instalment in our Motorsports Vehicle Series, and why not check out our Zivko Edge 540 V3 spot in the meantime!

For more information on The Crew 2, watch the official announcement trailer and look for more details here! Join The Crew community on the forums and Reddit, and sign up for our Beta here to try our new vehicles out for yourself!