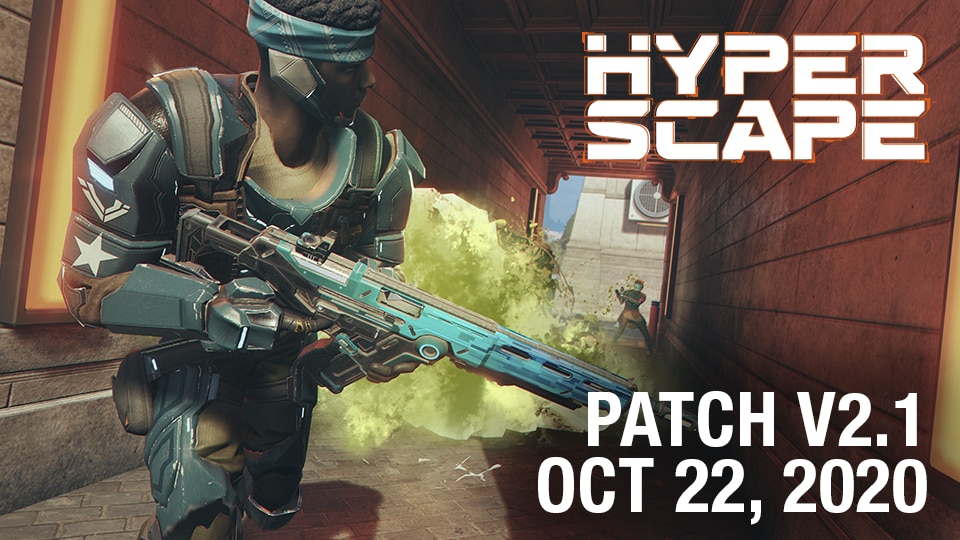 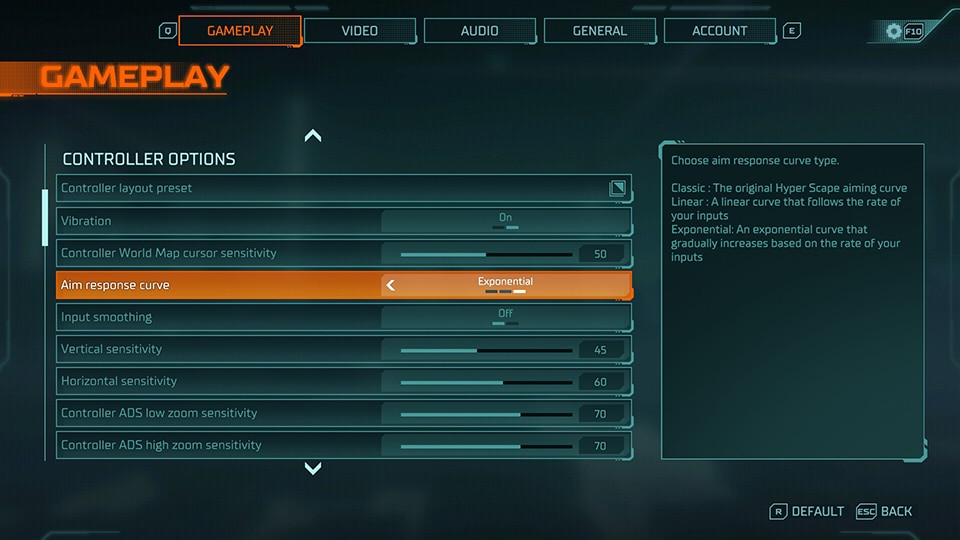 A new exponential aiming curve has been added for controllers and the behavior of the other curves has been improved. The three aiming curves (classic, linear and exponential) now use the same speed / top speed settings. We also fixed some issues where the diagonal speed was sometimes different between vertical & horizontal speed, which should increase the comfort when aiming.

This comes with new aiming settings to customize your controller:

We also added an __outer threshold (dead zone) setting __that should fix most input issues with controllers. 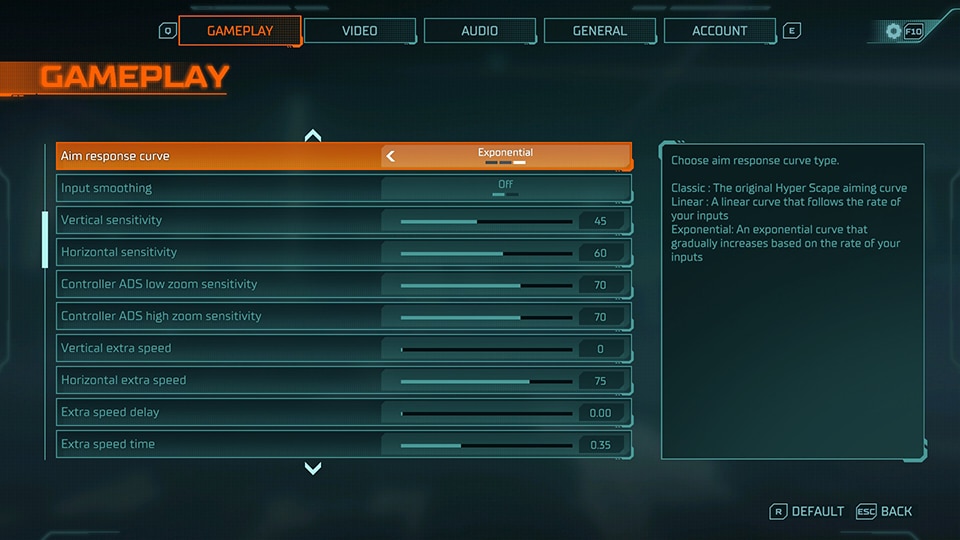 With the arrival of the new aiming curve system, we made a pass on all default aiming settings; we also decided to reset all the aiming-related settings for controllers to make sure everyone would benefit from the changes (if you experienced any control issues it is recommended you restore the default setting manually first). 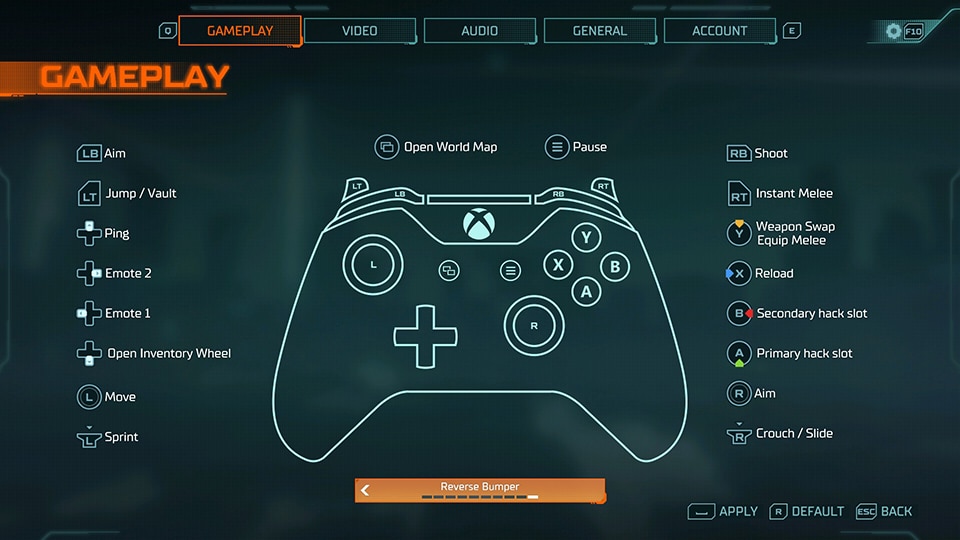 2 new controller layouts have been added: Reverse Bumper, which is a copy of the shoulder jump layout with reversed button functions and Stick Jumper, which allows player to jump with the right stick.

Also, Instant Melee action has been added to all layouts, except the "default" Hyper Scape layout. This means that the 3rd Emote action has become unavailable for certain layouts.__

FOV SLIDER ON PS4 PRO AND XBOX ONE X 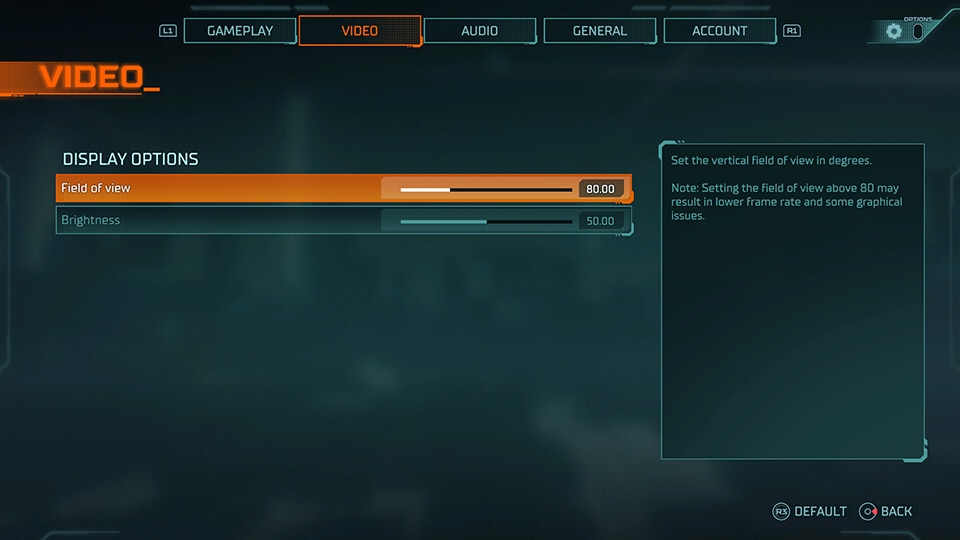 With improvements made to rendering in-game, a new field of view slider has been added on PS4 Pro and Xbox One X consoles.

Developer Notes: As we’ve communicated in the past, we’re committed to making this feature available on all platforms. The slider will be available on PS4 and Xbox consoles in a future Title Update coming in November! 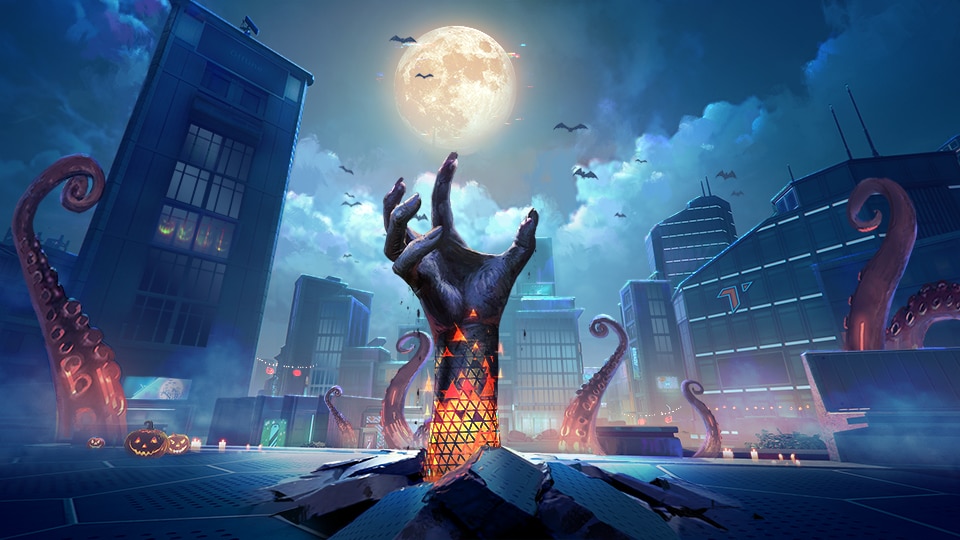 During this Event, Neo Arcadia will be switching to the Night setup and new limited-time game modes will continue to appear each week: Solo Crown Rush with Second Chance, then Dark Haze Squad. New items will also appear in the Shop, new Challenges will be available, and a Candy power-up will be present in all game modes. The Candies will provide a short speed boost as well as regen a chunk of your health The Solo Crown Rush mode will come back during the first week of Halloween! It will include a new respawn mechanic called Second Chance that will give players the opportunity to get back into the fight if they get eliminated early in the match.

Any number of times you get eliminated during the first 4:40 minutes of the battle, you will get re-deployed via your Pod. You will reappear in the skies directly above your death location and will be able to fly where you want from there. An icon will mark where you died. You will not keep the equipment you looted prior to your death but will keep your ammo, so try to decide if you want to go back to the same spot to get your loot back or prefer to find a new, safer place to land.

Second Chance will only be active in Solo Crown Rush, and while this mode is available. 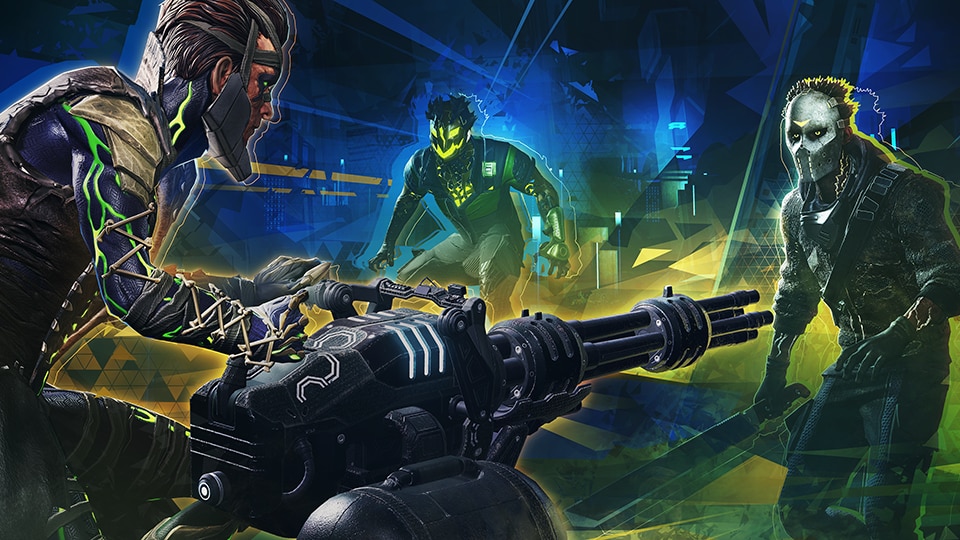 On the second week of Halloween, the Dark Haze Squad game mode will be available.

In Dark Haze, Neo Arcadia is plunged in darkness and covered by a thick fog reducing visibility, so watch out for enemies. In that mode, only certain weapons & hacks are available – but one of them is the Platform hack, that makes its debut in Hyper Scape! 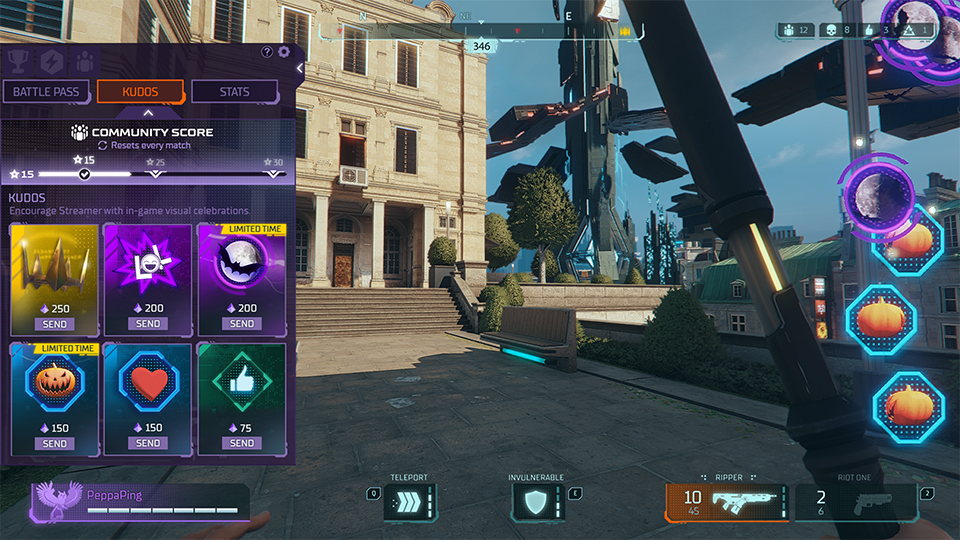 Celebrate Halloween with your favorite streamers on Twitch!

During the Halloween Event, three Legendary Halloween Kudos will be available on the Crowncast, Hyper Scape’s Twitch extension. Purchase one of these new Kudos to show your support for your streamers with spooky bats or pumpkins! 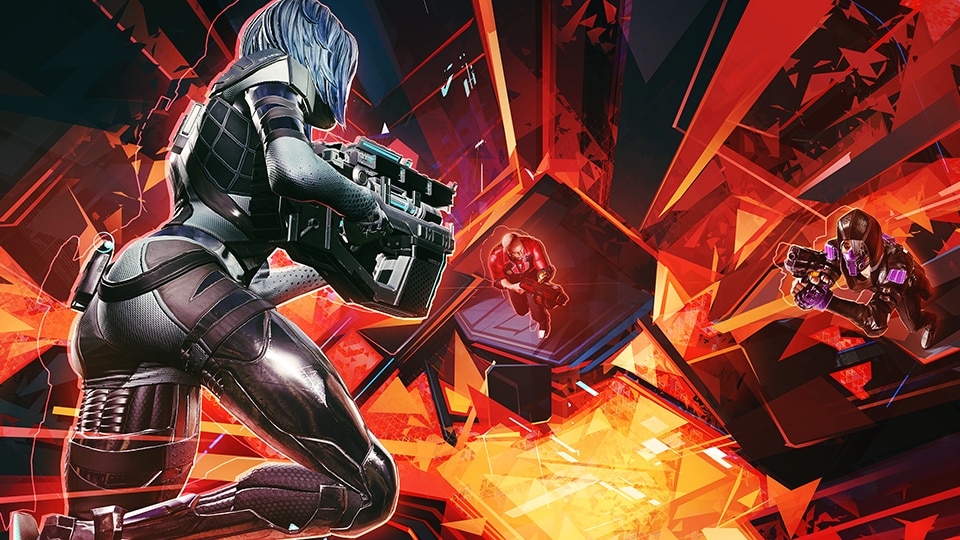 Floor is Lava is a new Squad-based limited-time game mode that will appear this season. In this mode, the lower levels of Neo Arcadia are covered by a lethal lava that will kill any contender falling into it in a matter of seconds! Only certain weapons and hacks are available in that mode – but one of them is the Platform hack.

This patch introduces several important changes to the game balance, as well as comfort improvements for many weapons, especially explosive weapons. Also, following the previous patch, a second step has been made to strongly reinforce the value of ADS (aka “aiming mode”) vs. hip-fire in terms of aim-assist both on PC & Console, for all “bullet” weapons.

We know some changes will be polarizing in our community, but they are an important effort toward making the game more accessible. As always, we will be monitoring the game and your feedback closely to continue adjusting the balance.

Developer Notes: The D-TAP has received both a damage boost and a reduction of its Rate of Fire. The overall result is an increase of damage accompanied by a less swarming feeling when you get hit. The lock ranges have been more strongly contrasted between hip-fire and ADS and will overall give the weapon a stronger value in ADS.

Developer Notes: This change will reduce the hack’s heal power in relation to the newly reduced Health Regen speed, to avoid making Heal too obvious a choice.

Developer Notes: The Invisibility/Invulnerable combo is currently too efficient and does not leave enough shooting opportunities for the opponents. This change will increase the minimum duration during which a player can’t use any of the two and is exposed.

Developer Notes: The Mine is still an underused hack; this change makes it the most damaging hack by far and should give it a bigger value vs. other offensive hacks. The high environment damage has been increased to match the one from the Slam. This will allow it to destroy a Wall hack in one blow.

Developer Notes: The Magnet is currently strong in specific rare combat configurations. This change should make it a little less efficient to lock players, and we’ll continue monitoring it closely in the future.

Developer Notes: The health regeneration speed will be strongly reduced: It will now kick in after 15 seconds following the last damage received, instead of 5 seconds previously. The intention here is to force players to pause a bit between engagements and create more opportunities to conclude fights by an elimination.

We’ve adjusted the Player Ranking thresholds for reaching specific Ranks to ensure they match up with the expectations of the community.

The visuals of lootable weapons & hacks have been upgraded to be more visible at longer distance and show the Fusion level of the item before you get within looting range.

Developer Notes: The deployment will now be a bit faster and feel more reactive in terms of navigation. This will be especially useful for the re-deployment of Second Chance.