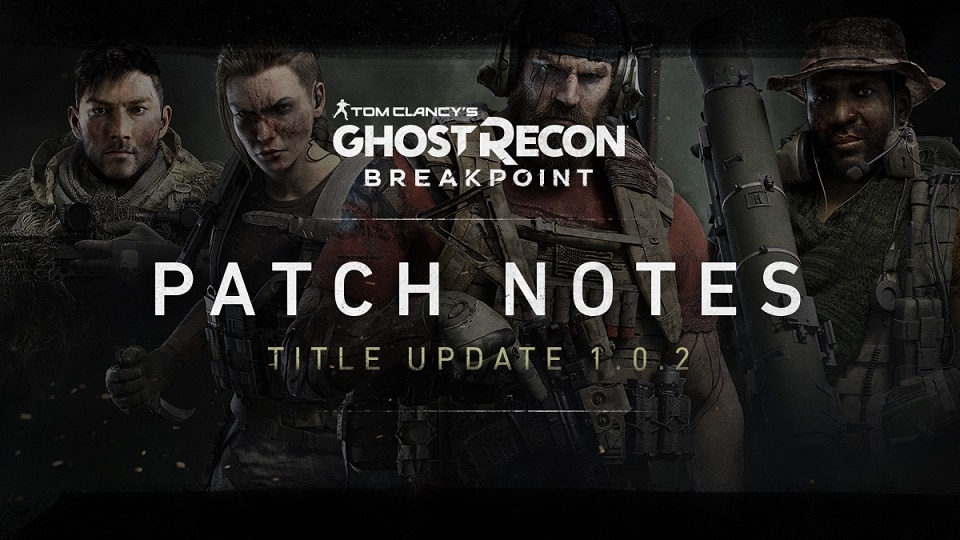 Ghosts,
This is just the beginning of Tom Clancy’s Ghost Recon® Breakpoint, and we’re incredibly grateful you’ve decided to go on this journey to Auroa with us.

We’ve seen a lot of feedback on the features and systems of the game and we are committed to improving your experience. Our immediate focus is providing bug fixes for more stability and ensure a smoother experience for all players.

Our next patch, Title Update 1.0.2, will be deployed on all platforms on October 15. In this Title Update, we’ve been able to identify and fix issues using player feedback and from data we’ve been gathering since launch. We can’t thank you enough for the time and passion you’ve put not only into the game but also into sharing your experiences with us.

Take a look at the patch notes below for the first round of adjustments, improvements, and fixes.

Please note: whether you purchased a digital or a physical edition of the game, you will need to download the patch before playing.

The size of the patch depends on your platform, the region, and your preferred language.

We will continue to make improvements to the game, so if you have feedback, suggestions, or thoughts, stop by the forums to share them with us.

Our next update to the game, Title Update 1.0.3, will introduce additional bug fixes and provide more information about the direction we’re heading in terms of improving the Breakpoint experience. We’ll have more details on that to share with you soon!