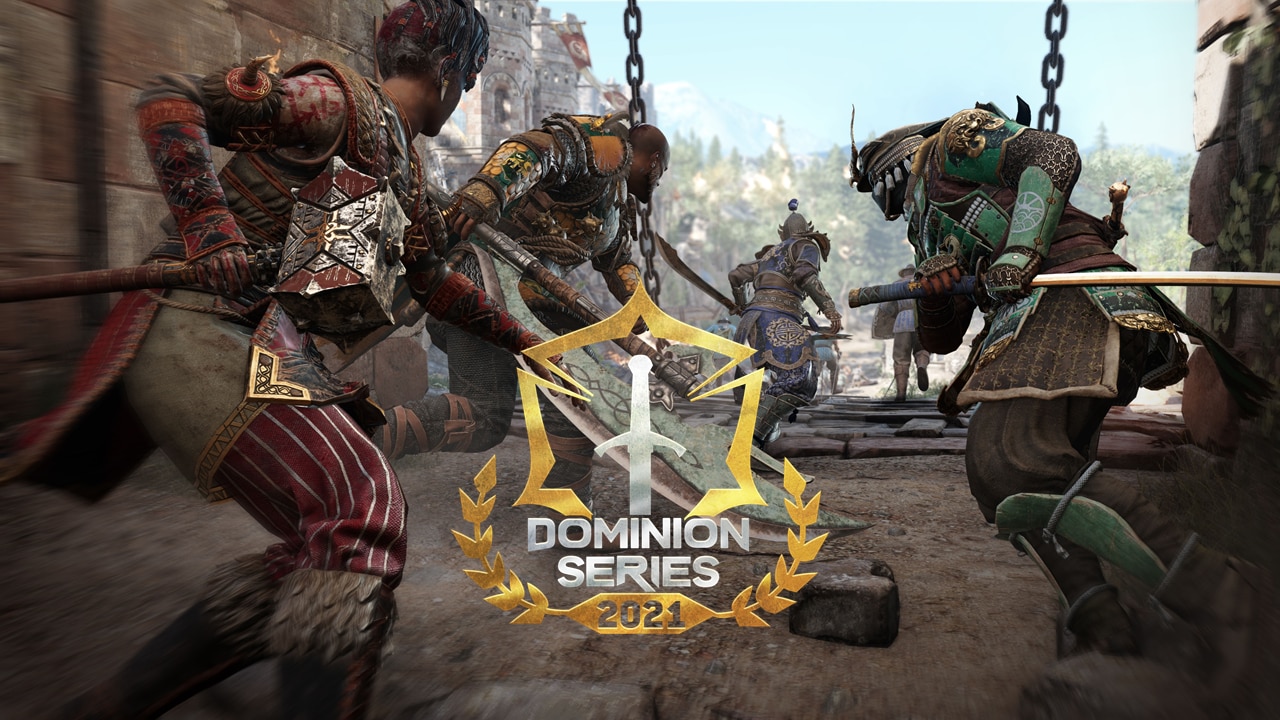 We are excited to inform you that the 2021 For Honor Dominion Series, our official competitive program where players compete in the 4v4 game-mode Dominion, begins on May 1st, with a total prize pool of $65,000!

The format for 2021 will be different from the previous year. All information such as how to sign up, official rules, prize breakdowns, and more will be on the battlefy website, which will be up and ready for you starting April 16th.

The Dominion Series 2021 will feature a circuit that will run throughout the entire year, starting from Year 5 Season 1 to Year 5 Season 4. Each season will be considered a “Stage”, with a total of 4 stages in the program. 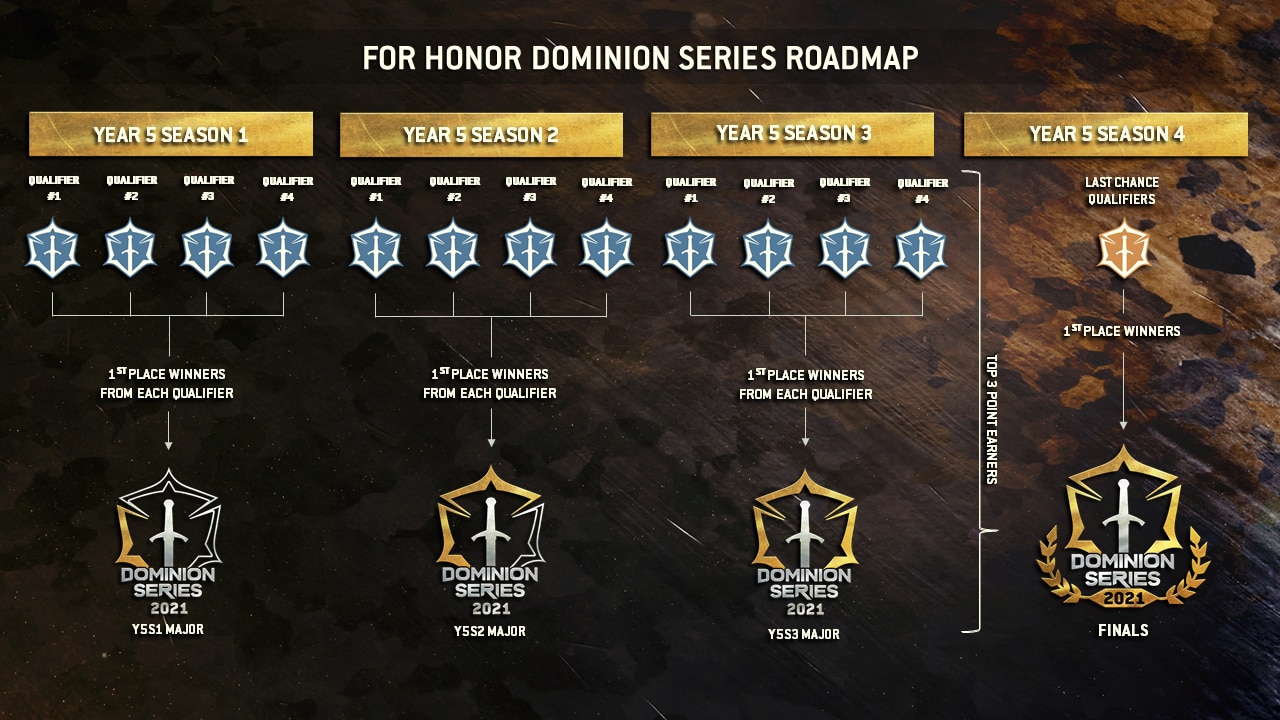 The Dominion Series is currently online-only and region-locked, for NA and EU players who are at least 18 years of age. Registration will open on April 16th.

The first 3 Stages are made up of 4 Qualifiers tournaments and 1 Major tournament each. For every event, players can win points by placing high enough. At the end of this year, top teams in each region will be invited to the Finals in Stage 4, or Y5S4.

These are online tournaments that are open to everyone (unlimited teams). Each season in Year 5 will have 4 qualifiers, excluding Y5S4. The format will be double elimination brackets, with each match a Best-of-3. In each Qualifier, the top 4 teams will receive points based on placement, and in addition, the first-place team will be invited to the closed Major. 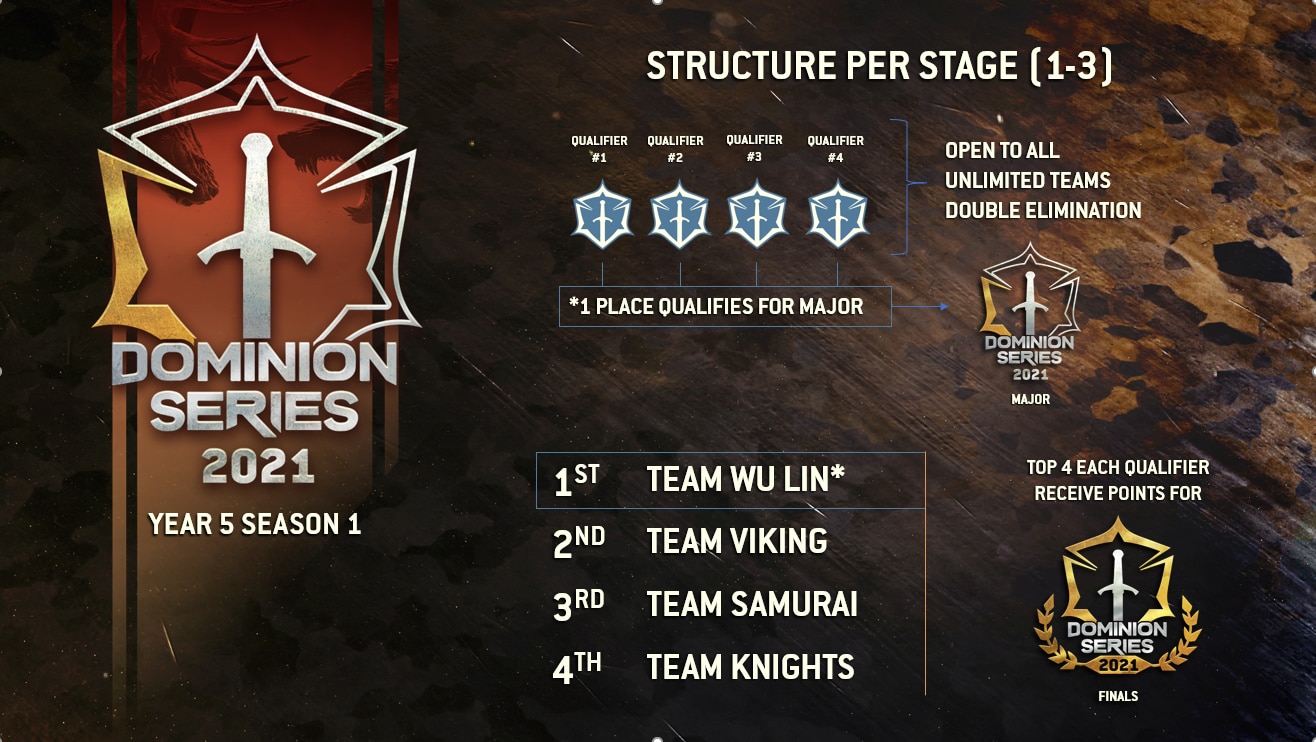 A Major is a 1-day online broadcasted tournament, held in both North America and Europe separately. It brings together the 4 winning teams from Qualifiers, who will compete in a double elimination format. Competing teams will receive points and a cash prize based on their placements

The LCQ is a 1-day online tournament that will be held in Stage 4. Also in a double elimination format, the winning team will advance to the Finals.

The Finals are a 1-day online, broadcasted event held in Stage 4. The 4 teams will play for a cash prize in a double elimination, Best-of-3 format with the Grand Finals being a Best-of-5. The winner will be crowned the For Honor Dominion Series 2021 Champions in their respective regions.

Thanks to your feedback from our previous Dominion Series, we have also added updates and changes to our rulebook. Make sure you read through all of them to know what’s expected of you during tournament day!

Looking for information on past seasons of the For Honor Dominion Series? Check out the 2020 Homepage at battlefy.com/dominionseries/2020. The brackets and results of the Championships can be found here for Europe and here for North America.