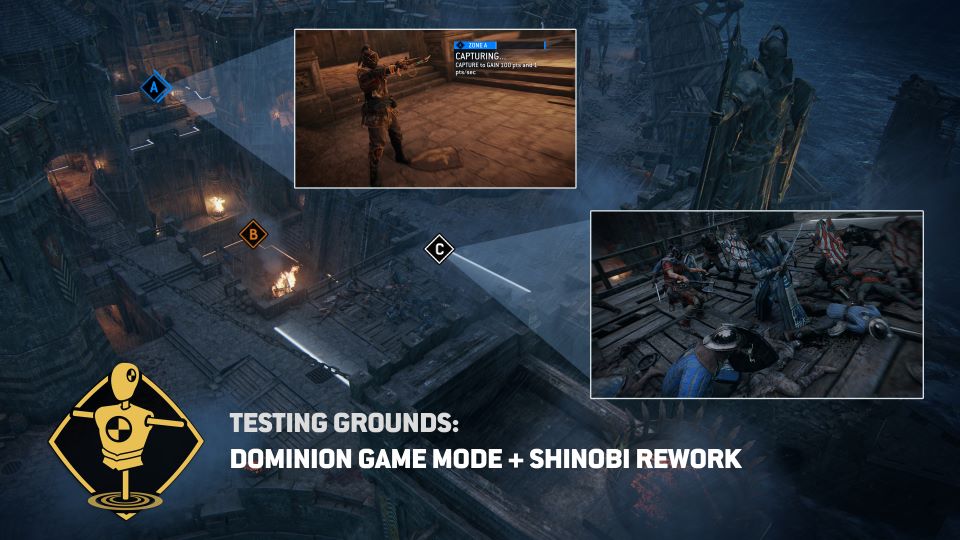 The Fight Team is here again with a reminder for the Y5S3 Testing Grounds which starts today and runs up until September 30th.

As mentioned at this season’s reveal, the subjects of these Testing Grounds are a Shinobi rework and the Dominion Game mode. In case you missed our previous blog post detailing the changes you can expect, we’ll go through the overview of these changes below. For the full list of changes, including more details, read our Patch Notes!

As usual, we’ll be monitoring the performance of the various changes and are keeping an eye on social media for additional feedback!

On the Hero side for this season’s Testing Grounds, we’re focusing on a second iteration of Shinobi. The response from the previous iteration was generally positive, but we felt from your feedback that we needed a second Testing Grounds for Shinobi, both to fix issues as well as improve on some aspects of the hero to make sure Shinobi is both competitive and less frustrating to fight against.

We’re focusing our efforts on the following aspects of Shinobi:

It is important to note that unless noted here, the changes from the last Testing Grounds still apply to Shinobi – if you wish to learn more about these changes, please visit our Year 5, Season 2 Testing Grounds blog post!

We’ve removed Bleed from Shinobi’s kit entirely. While Bleeding is an interesting mechanic, we feel it is best used sparingly for specific synergies, like the ones we see on Nobushi, Peacekeeper and Shaman. After careful consideration, we found that Shinobi did not need Bleed-specific synergies outside of fringe benefits of playing with the other Bleed heroes. Removing Bleed also lets us balance the moves more easily, and also removes the Revenge issue that was present on the hero.

Each of these attacks now deals direct damage –

These values should better reflect the damage Shinobi should deal in these situations.

Sickle Rain was too strong in the previous Testing Grounds – it dealt too much damage and fed too little Revenge, while also ignoring Pinning rules, draining Stamina and was accessible from Guard Break. We’ve made the following changes to Sickle Rain:

The move retains the properties from the previous Testing Grounds – the Top version is still Unblockable for pressure in various situations while the Side versions are still Undodgeable for use in various mixups. With these changes, we feel like Sickle Rain will be in a better situation – it should both be less frustrating to face as well as still being a strong ganking tool without being overly strong.

Shinobi’s Ranged Heavy Attack was changed to a guaranteed Kick followup and a group fight tool in the previous Testing Grounds; while it being a guaranteed Kick followup works and makes for a more interesting and diverse hero, the fact that it could wallsplat and was target-swappable made for some frustrating moments. The wallsplat created situations where Sickle Rain was guaranteed, and the target-swappable property made it frustrating to fight against since Shinobi could tag other heroes from off-screen with a ranged Bash attack that could come quite frequently.

We’ve made the following changes to Ranged Heavy Attack:

With these changes, Shinobi’s Ranged Heavy Attack becomes a strict dedicated followup to Kicks – it is still a strong followup that leads to deeper mixups, but it should now be less frustrating to face. We’ve also removed the link from Back Flip as the primary intended usage of it was to be target-swapped; since it no longer can, it made no sense to keep the attack there as it provides no pressure.

We received feedback from many of you concerning Shinobi’s input leniency on some moves; namely that the followups to Front Roll as well as Shadow Strike were too difficult to perform and needed a large amount of buffering to properly execute. We hear you!

We’ve made the following changes:

These changes should help make these moves easier and more comfortable to perform. It is important to note, however, that delaying the Front Roll followups will make them easier to dodge early.

Front Roll and Back Flip

Front Roll and Back Flip were in an interesting position – while they are performed using the Dodge button, they did not behave like Dodges; they were Guard Break immune, but did not have iframes. As such, they were difficult to use in multiple situations, as players frequently got hit out of them.

The following changes were applied to Front Roll and Back Flip

With these changes, these moves should behave more like actual Dodges, and more importantly like Dodge Cancels – players should be able to use them to avoid attacks from opponents and use them to escape tricky situations.

We’ve also re-enabled Shinobi’s option of performing a Back Flip after most attacks on Block and Miss; while in the previous Testing Grounds we restricted the functionality to being accessible after a Hit only, this felt overly restrictive and hindered Shinobi’s mobility in group fights.

We’ve also made some other changes to Shinobi’s options when Dodging; Shinobi lacked a good opener in the previous Testing Grounds due to lacking options when Dodging forward, and as such the Kick was too easy to dodge. We also received feedback that Shinobi was still too slippery when using Double Dodges, and that access to neutral attacks from Double Dodge was lacking as players needed the various options to keep themselves safe.

These changes to Shinobi’s Dodges both should address the issues where Shinobi was too difficult to catch as well as give the hero a better opener from Front Dodge.

Last but not least, here is the lowdown on the Dominion Improvement entering the Testing Grounds this season, where we will finally start tackling the beast that is Dominion’s Scoring system.

We’re aiming to address some of the long-standing issues that have bogged down the game mode and take a long, hard look at where we want its future to go.

Internal Playsessions are great and all, but now we really need you, the players, to get in here and duke it out so we can find our bearings and see what needs to change!

All hero classes now gain the same amount of renown from all sources. 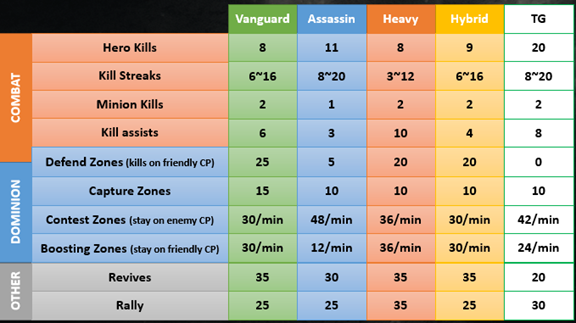 *Developer's Comment: While we do want Heroes to excel in some areas more than others, we do not want to force players into a playstyle depending on their chosen Hero. With this Testing Grounds, all Heroes gain the same Renown from all activities that give Renown. We're expecting this to be a major boon to the Assassin class whose Renown gains were either feast or famine, the TG should put them on the map when it comes to unlocking their 4th Feats more consistently.

*You’ll notice we’re putting a bigger emphasis on Contesting Zones and a lesser one on Boosting. We want to reward players who go out there and take risks rather than sit on their home Zone.

*Also, by removing the Zone Defense bonus, we're also aiming to make it more attractive to try and capture the enemy's Zone without feeling like defeat would grant the opposing team a large amount of renown. 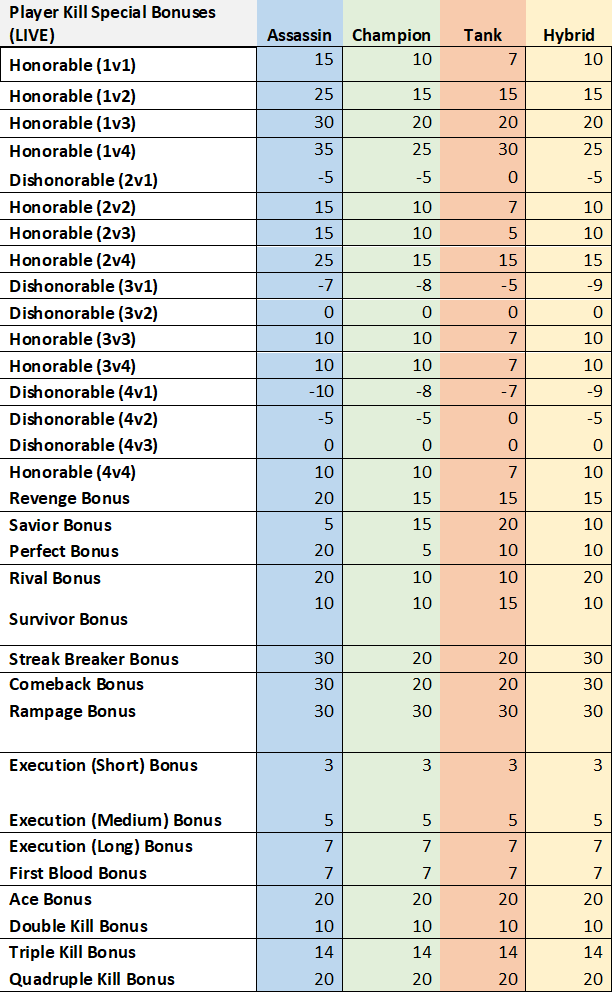 Developer's Comment: Renown gains have always been very confusing to understand, with semi-hidden bonuses given for actions that were often unknown to even the player that performed them. By removing a large amount of renown sources, we're aiming to keep the ones that feel most impactful and the ones that can help the losing team stage a comeback.

Furthermore, it was hard to balance Renown with so many ways the players could gain bonuses for various activities, by removing a lot of them and keeping the essence, we're hoping to have a tighter grasp on the balance of these rewards while also making Renown gains easier to comprehend.

Here are the thresholds at which you will now unlock your feats: 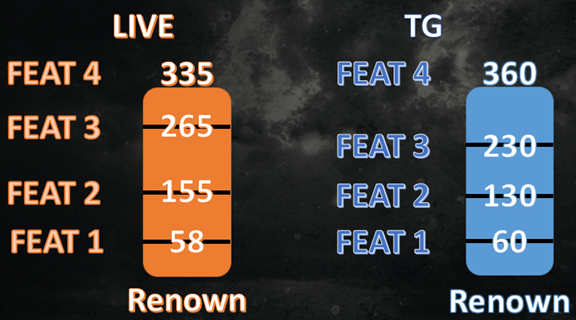 Developer's Comment: The gap between Feat 3 and Feat 4 was so small it could often be cleared in a single kill, which made the late game Feat progression oddly fast. By spreading out their unlocks in a more logical fashion and making them progressively harder to unlock, we want to make reaching Feat 4 feel like more of an achievement.

No matter how many players of the same team are capturing a Zone, the capture speed will always be 5.5 seconds.

Developer's Comment: With this, we aim to make capturing a Zone require more commitment and allow more counterplay by the opposing team. This should also make it less efficient for groups of 3-4 players to roam the map and capture Zones incredibly fast. 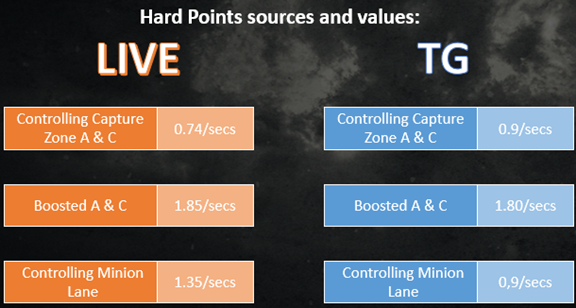 *Developer's Comment: With the Minion Lane already being a substantial source of Renown, we wanted to bring down its position as the best source of Hard Points as well by lowering its value when captured. *

Scoreboard's "Score" column is now titled "Renown" in all Game Modes where this value is actually the player's Renown tally.

We look forward to your feedback, as usual, through multiple channels; we’ll monitor social media and will send a survey to formally gather your feedback. Be sure to leave feedback if you want to be heard!