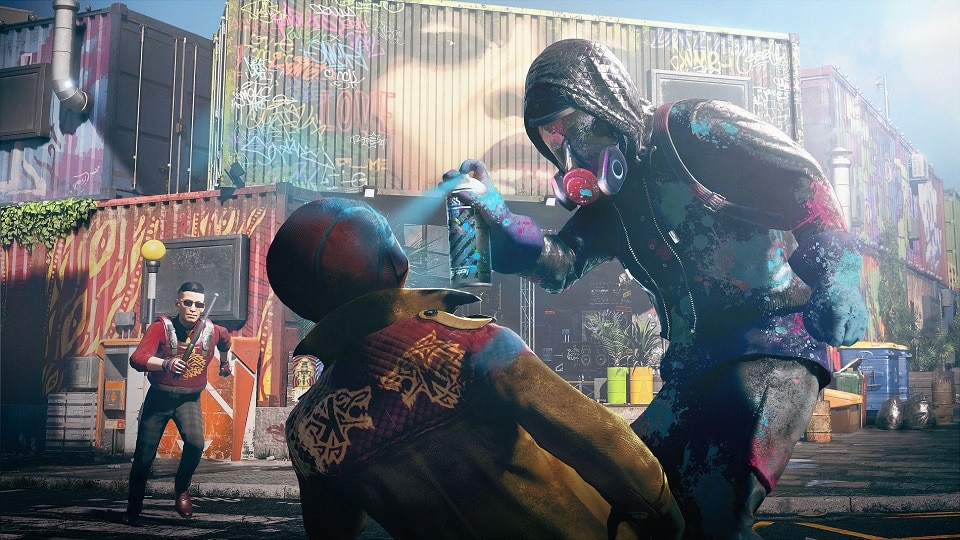 Essential Guide to Gadgets and Tech in Watch Dogs: Legion

Technology is key to taking back the highly surveilled dystopia of Watch Dogs: Legion’s London. Equipping your operatives with gadgets, hacks, and upgrades empowers your Resistance to tactically tackle the enemy. Collecting Tech Points throughout London for upgrades as you progress helps you gain the upper hand. More Tech Points are available on the map as you liberate boroughs.

In Watch Dogs: Legion, gadgets help complete seemingly impossible missions, and add flare to your operatives. Take a moment to consider which gadgets are available to each operative, and plan for any challenge that comes your way. 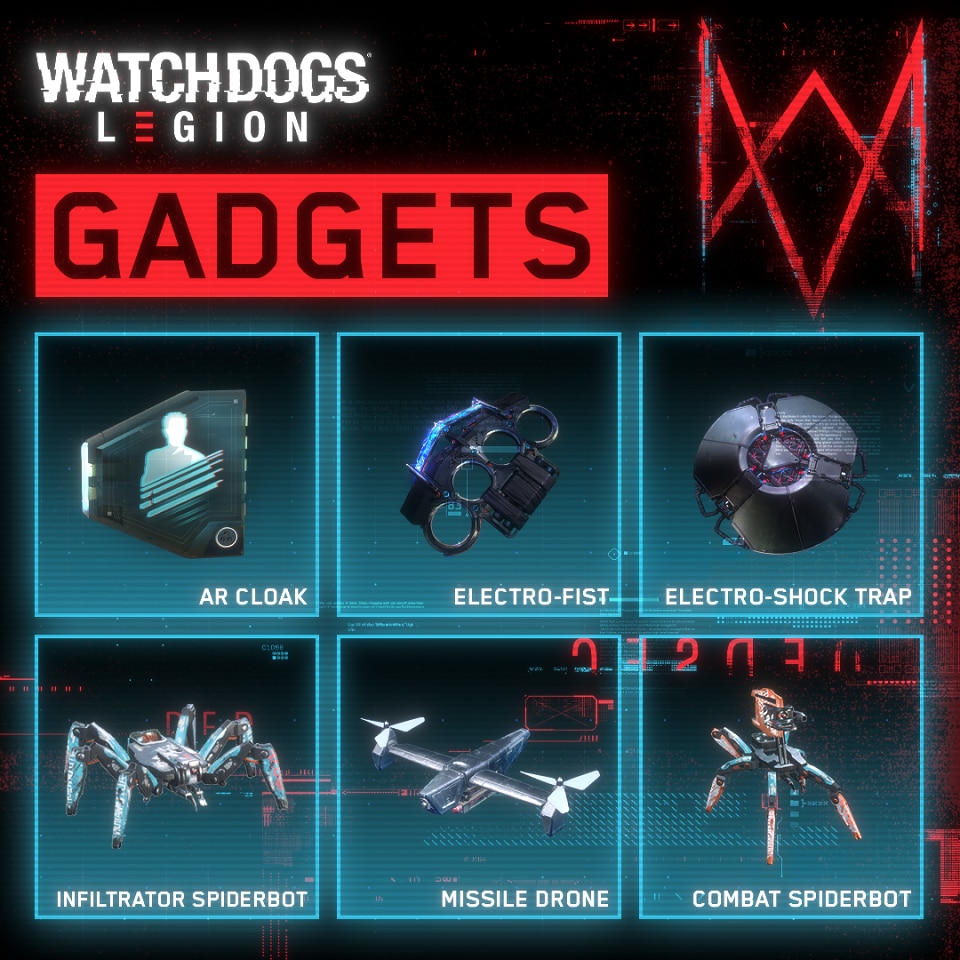 AR Cloak Ever dream of owning a cloak of invisibility? This augmented reality cloak makes that dream come true, at least for a few seconds. The AR cloak camouflages your operative and breaks line of sight - rendering them virtually invisible!

Electro-Fist Punching with power! The Electro-Fist is a knuckle sandwich served with a side of electrostatic energy that knocks out an opponent with a single blow.

Electro-Shock Trap This non-lethal gem acts like a sticky mine and delivers AoE shock damage to enemies, damages drones and vehicles, and looks amazing when you bring it into a fight. You can toss it over barriers and from other hiding spots to deliver a shocking surprise to your target. Watch out for innocent bystanders though. Or don’t.

Missile Drone When drones attack! The Missile Drone is great for targeted attacks. It delivers lethal impact in a small package.

Combat Spiderbot A short-range non-lethal Spiderbot with an automated turret and armor. Need a personal turret to keep you covered while you handle other matters? The Combat Spiderbot has got your back.

Your smartphone just got smarter. Unlock powerful tools and discover how to hack London to your advantage. Turn the enemy’s tech against them for a damaging surprise and a boon to your operatives. Combining hacks with gadgets and abilities can bring your personal play style to a whole new level. 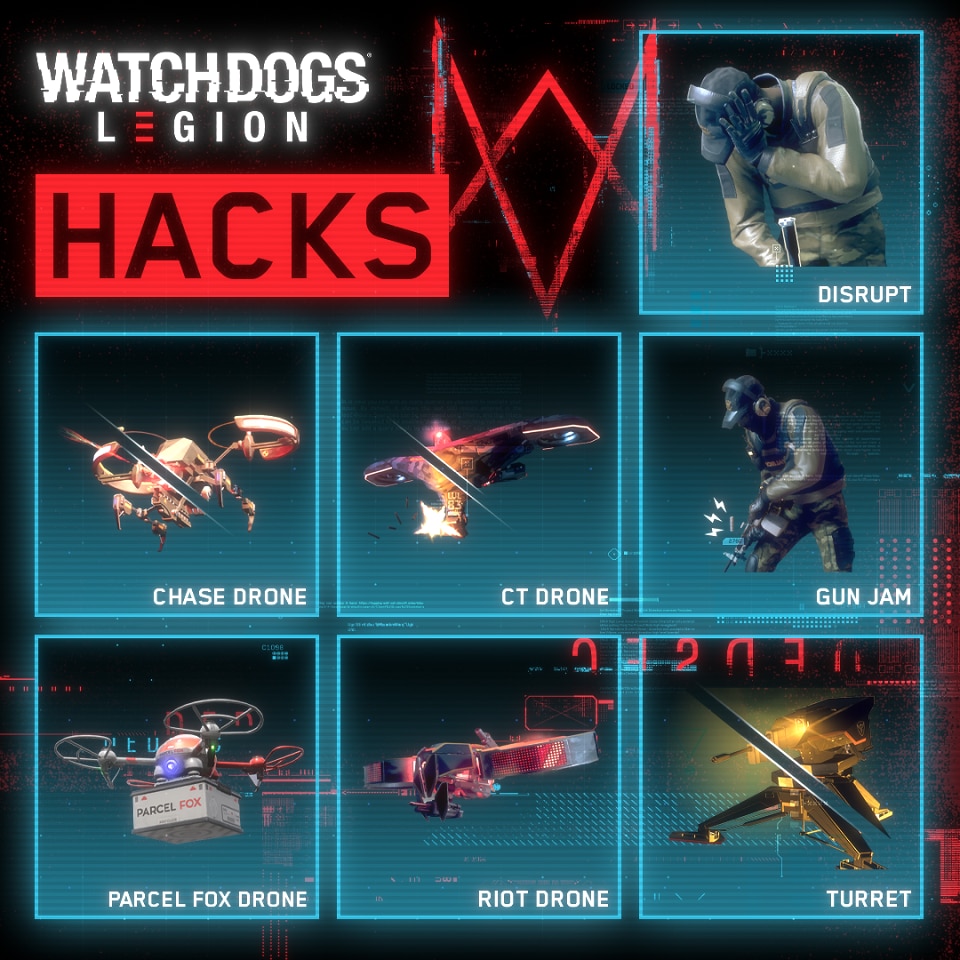 Attract Hack Any operative can set or alarm traps on certain enemy equipment but, unlocking the Attract Hack will allow you to lure enemies toward a hacked electro-explosive trap.

Disrupt Hack The Disrupt Hack buys you a few critical seconds by attacking an enemy’s Optik for a short time, and preventing them from taking immediate action. This is particularly useful when facing multiple enemies.

Chase Drone Hack There are a few types of drones that you’ll encounter in London. Chase Drones will hunt you and attack, so the ability to temporarily disable them is especially helpful.

Upgrades Remote control a Chase Drone via Hijack. Temporarily turn the drone against its owner.

CT Drone Hacks Counter Terrorism Drones roam the skies of London, but with this hack, you can disable them for a short period of time and make your escape!

Upgrades Hijack CT Drones. CT Drone can be commanded to fight its own allies on your behalf.

Gun Jam There’s nothing more frustrating than having your weapon jam on you. Why not let your enemies deal with this embarrassing malfunction by unlocking the Gun Jam hack. Any advantage in your favor is a good one.

Parcel Fox Drone Hacks Packages are delivered throughout London with Parcel Fox drones. You can find stations anywhere and take on deliveries for some ETO – the only currency accepted in London. These courier drones can also be disabled and hijacked.

Riot Drone Hacks The advantage to disable Riot Drones – even for a short period of time – is key to survival in heated situations.

Turret Hacks Enemies have their gadgets too – and you’ll encounter turrets in many missions and challenges. This hack lets you temporarily shut a turret down – and sometimes those few seconds can make all the difference between success and failure.

You need Tech Points to upgrade your gadgets and abilities. These can be found all over London, and are visible on the map for boroughs you have liberated. Upgrade your tech and leverage that power to enhance your success in the uprising. Unshroud the ins and outs of upgrades with the information below. 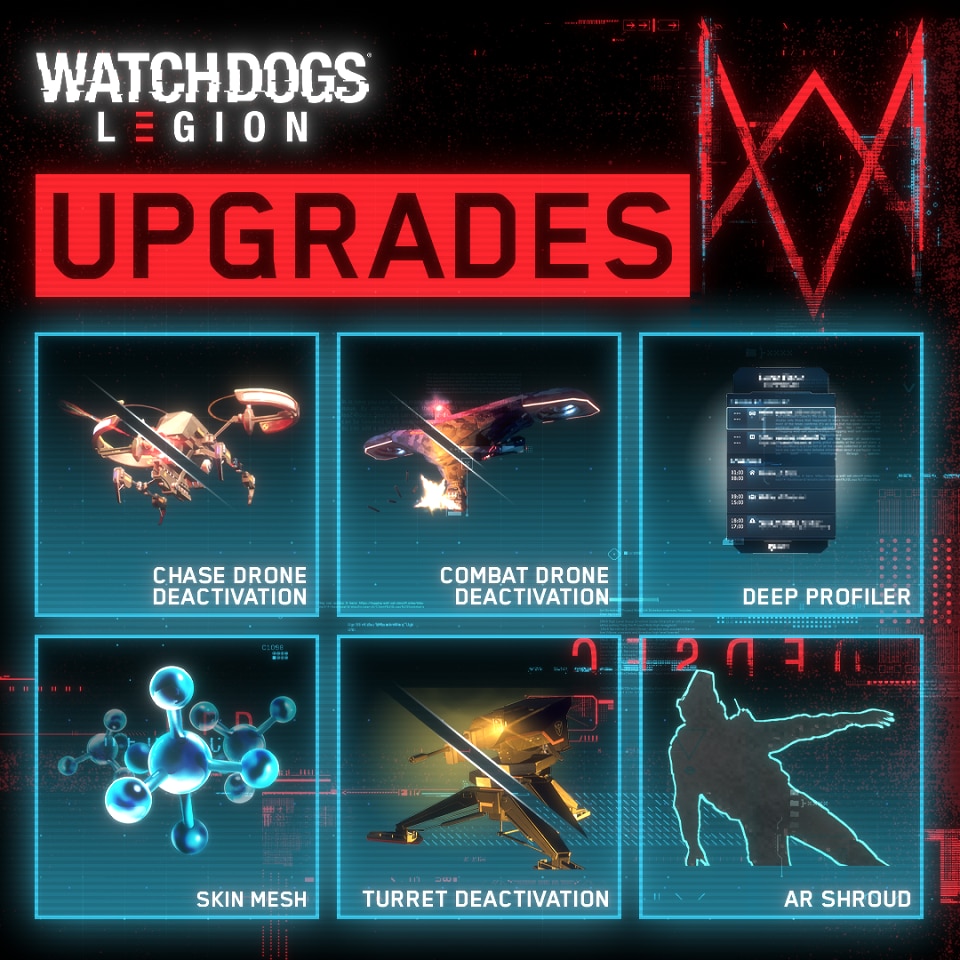 Chase Drone & Combat Drone Deactivation Drone be gone! While other hacks allow you to hijack and turn these drones against their enemies, this upgrade lets you shut them down completely. Approach a Chase or Combat drone once you’ve disabled it and manually deactivate it permanently.

Deep Profiler Some recruits are worth a little more work than others, depending on what skills and abilities you’re looking to add to your Resistance. The Deep Profiler upgrade lets you see schedules and contact info when you profile someone. This is helpful when you need to convince untrusting DedSec enemies to become allies.

Skin Mesh While most of the hacks and gadgets in Watch Dogs : Legion maximize the damage you deal, Skin Mesh reduces the amount of damage your operative take. A great trick to surviving longer no matter what the enemy throws your way.

Turret Deactivation Permanently deactivate turrets via manual shut down with this upgrade.

AR Shroud Don’t let downed enemies ruin your perfect stealth run. The AR Shroud makes clean up a breeze with a quick digital shroud that vanishes a target after a takedown.

The people of London are literally at your fingertips. As you infiltrate the city, profile passersby or people you meet. You’ll soon discover that many possess unique skills and have access to special gadgets and abilities that take your Resistance to the next level. Convince them to join you by taking care of a few favors, and they’ll join your uprising. 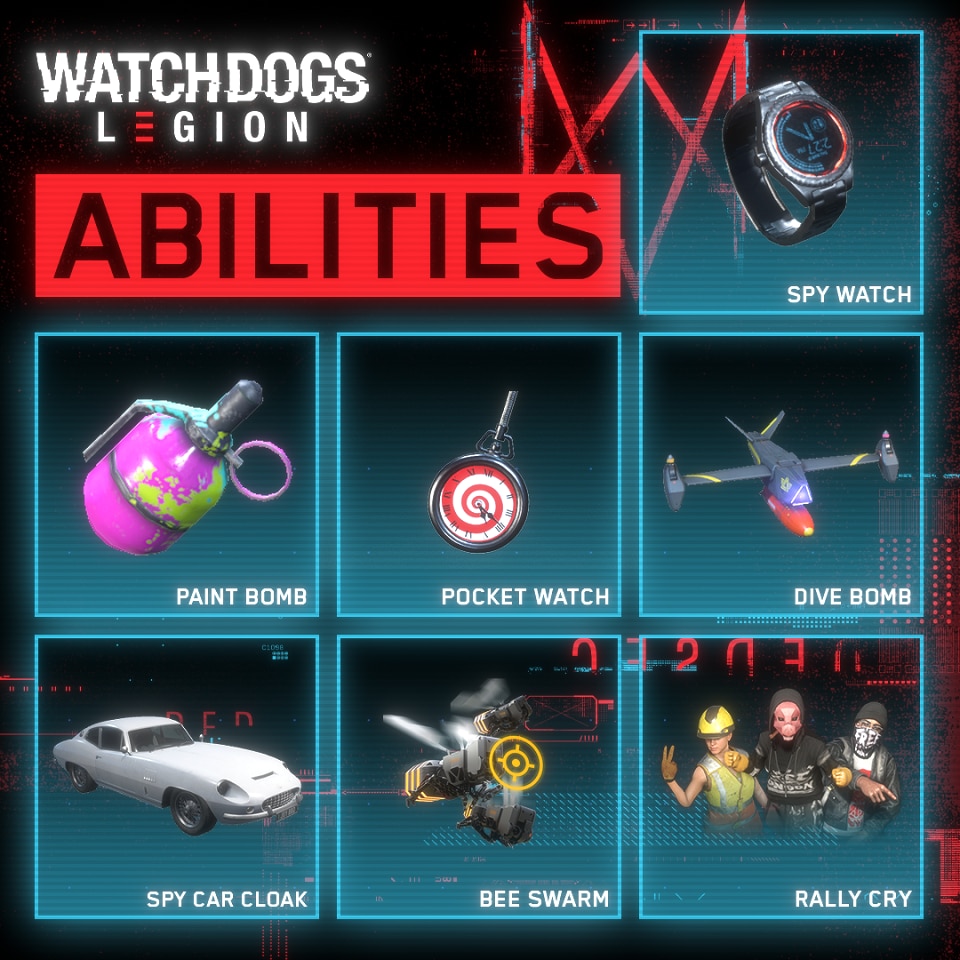 Spy Watch There are some highly skilled professionals on the streets of London who can jam enemy weapons with what looks like a regular watch.

Pocket Watch The power of persuasion likes in the hands of London’s street hypnotists. You will spot one a mile away, and their ability to temporarily hypnotize enemies into allies is mesmerizing.

Dive Bomb Some drone enthusiasts are merely hobbyists, but others are experts, with the ability to select an enemy to be dive-bombed by a drone from above.

Spy Car Cloak Need to make a quick getaway? If you find yourself a spy to add to your Resistance, you’ll have access to a sleek spy car, and the ability to temporarily cloak it.

Rally Cry As you explore the boroughs, you’ll see protestors rallying crowds. If you recruit one of these protestors with access to a megaphone, they can use Rally Cry to summon allies to assist in melee combat.

Smoke Grenade When you need cover to break the line of sight but don’t have a good hiding spot, pop a Smoke Grenade to disorient enemies.

Tear Gas An effective way to handle a situation where you’re outnumbered, the recruit with Tear Gas can utilize this ability to damage and disorient enemies.

Combining gadgets, hacks, upgrades, weapons and abilities creates several different ways you can take back London. Start building your Resistance and check out:5 Essential Tips and What Kind OF Player Are You for more Watch Dogs: Legion info. 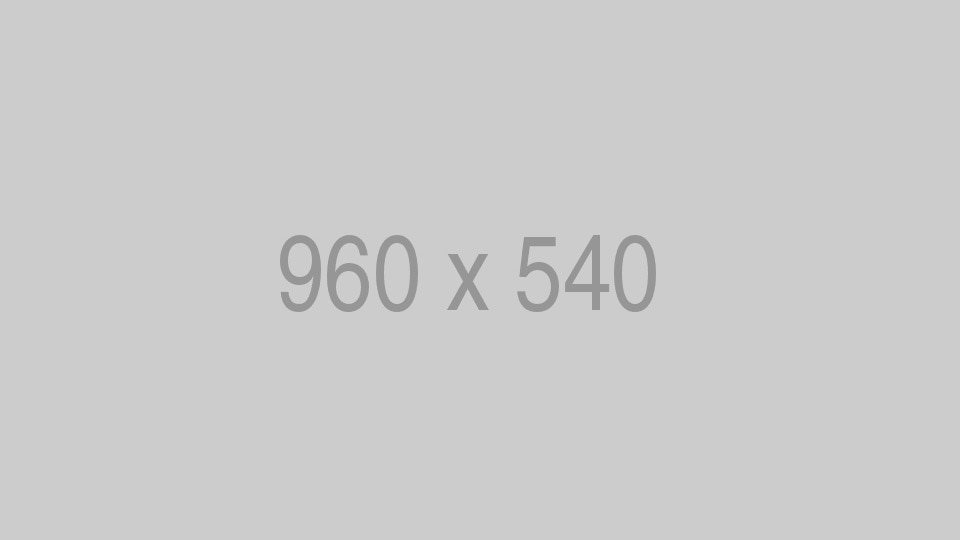