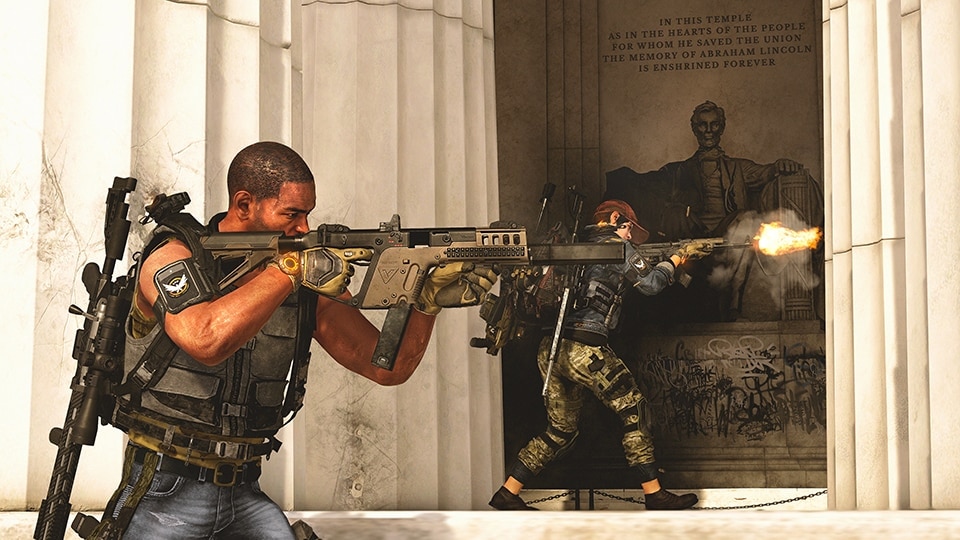 Endgame Specializations, Black Tusks, and The Fight to Reclaim DC

The Division 2's garbage-strewn, semi-flooded streets are overrun with gasmask-wearing Hyenas, militaristic True Sons, and other violent factions. Striking out from your Base of Operations, the newly reclaimed White House, you'll continually tangle with them, either during missions, fighting to take back fortified control points, or just randomly encountering their death squads on the streets. And once you've finally quelled the hostile factions, liberated Washington, DC's civilian settlements, and put the city on the path to reconstruction – well, that's when another, even bigger battle starts to brew, this time against the fearsome Black Tusks.

The Division 2's endgame is a major focus for the developers, and will present you with a massive challenge unlike any you've faced before. The ragtag militias of the campaign will be elbowed out by the ultra-advanced Black Tusks, an invading faction whose tough-as-nails operators employ aggressive tactics, high-end weaponry, and deadly turret drones. They'll fight relentlessly for every inch of ground, and even players who make it to the level cap of 30 have a tough road ahead as the Black Tusks sweep in to take control of the capital. And if you're looking for an even stiffer challenge, you'll be able to join up with another squad for eight-player raids, designed to be incredibly tough missions for which a good team is essential.

Fortunately, by that point you'll have a few tricks of your own. Getting to The Division 2's endgame gives you the chance to pick one of three Specializations, unlocking new skills and granting you a special high-end weapon. Survivalists are equipped with a crossbow that can unleash precise explosions from a distance. Sharpshooters are armed with a powerful .50-caliber sniper rifle, while Demolitionists can use a grenade launcher to wreak havoc on enemy positions.

Whether you're deep into the endgame or just starting out, you'll also have access to some formidable autonomous firepower of your own. Tossing an auto-turret into the enemy's midst is a great way to whittle down their health and divide their attention, while deploying a flying drone lets you drop bombs or temporarily keep your squad healed, depending on the configuration you decide to go with. And sometimes, when you're facing down a squad of foes who've dug themselves in behind cover, it's fun to just send a rolling Seeker mine into their midst to create some explosive chaos.

As you invade the Black Tusk's fortifications – some of them set in visually fascinating environments like the (working) planetarium and aircraft exhibits of the National Air and Space Museum, or amid the faded mid-century lounge stylings of a Cold War-era Federal Emergency Bunker – you'll fight wave after wave of commandos. Well-armed and frequently accompanied by drones, doglike robot gun platforms, and other armaments, they'll throw everything they have your way, and you'll need to work with your squad to stay healed, outflank your enemies, and push them back.

Getting to the endgame is as much about uniting civilians as it is pushing back the aggressive factions trying to tear the capital apart. As you make your way through the campaign, you'll need to find and contact fortified settlements, whose residents have no shortage of dangerous jobs for you to do. The first mission you'll undertake for the Theater Settlement, for example, has you storming the Grand Washington Hotel floor by floor, from the lobby to the poolside bar on the roof, to rescue a girl who'd been kidnapped by the Hyenas and one of their bosses, an armored bruiser named Saint.

Bringing the girl home (after blasting your way out of the hotel lobby) unlocks one of four major upgrades back at the Settlement, each tied to a different main story mission. In this case, it let us recruit a specialist, Inaya al-Khaliq, who headed back to the White House to set up a crafting station for our later use. More services can be opened up by helping the Settlement upgrade further, like firing ranges and Dark Zone officers, meaning it's in your interest to help civilians out whenever you can. You'll also want to keep an eye out for control points near settlements that you can capture, which puts more armed friendlies in the streets and opens up new fast-travel points. The more you help the civilians take control, the more you'll diminish each faction's hold on that area – and conversely, letting enemy factions operate unchecked can gradually make them more powerful.

There are always lots of opportunities to mix it up and earn loot in The Division 2, whether through story missions, side missions, or just disrupting enemy patrols in the streets. You'll be able to try them for yourself from February 7-10, when the Private Beta begins on PC, Xbox One, and PS4. Pre-ordering The Division 2 gets you guaranteed access to the Private Beta, or you can sign up here for a chance to play.