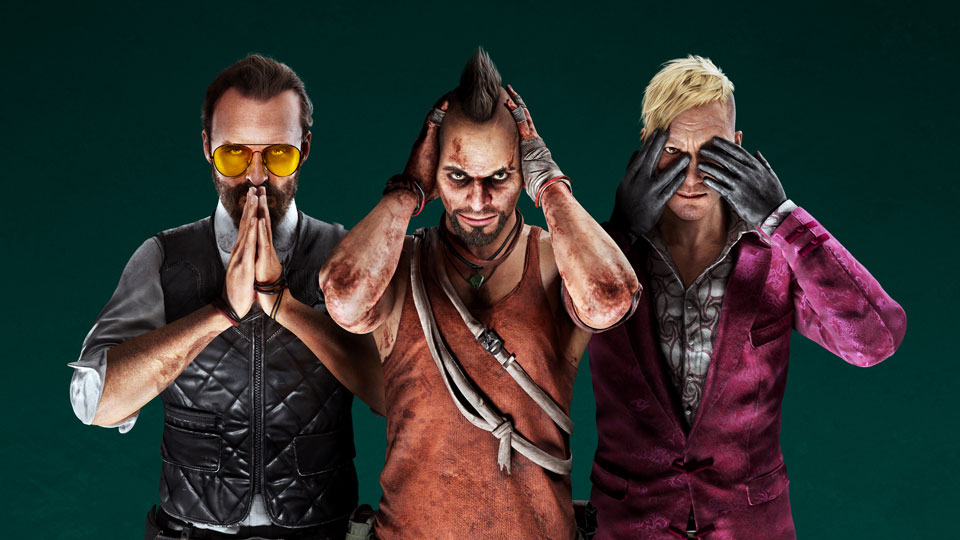 Far Cry 6 – Play as Legendary Villains With the Season Pass

Vaas Montenegro. Pagan Min. Joseph Seed. These three villains built a reign of terror across Far Cry 3, Far Cry 4, and Far Cry 5, but in the Far Cry 6 Season Pass, you’ll be the one taking the reins. In each of the three DLC Episodes included in the Season Pass, you’ll play as one of these major antagonists as you delve inside their minds to uncover their backstories, encounter familiar faces, and find out what it’s like to become the villain.

Set in twisted worlds inside the minds of each character that feature locations from Far Cry 3, Far Cry 4, and Far Cry 5, each DLC will see you getting stronger the longer you survive by unlocking perks and finding new weapons. Each time you die, you’ll start over from scratch and use the knowledge you’ve gained to push further into the villain’s psyche. Each villain is played by their original voice actor, making playing as Vaas (Michael Mando), Pagan Min (Troy Baker), and Joseph Seed (Greg Bryk) all the more memorable.

The Far Cry 6 Season Pass also includes Far Cry 3: Blood Dragon*, which will take you back to the grim cyber-future of 2007 to play as Sergeant Rex “Power” Colt. He’s an all-American action hero hell-bent on destroying an army of killer cyborgs while dishing out gritty one-liners and tangling with massive lizards that shoot lasers from their eyes. You’ll even be able to bring Colt’s signature cyber-style back to the island of Yara with an array of Blood Dragon-themed items for Far Cry 6, including weapons, a vehicle, and a robo-canine Fang for Hire named K-9000.

Far Cry 6 is launching on October 7 on Xbox Series X|S, Xbox One, PS5, PS4, PC, and Amazon Luna, and is included in a Ubisoft+ subscription**.

**A$19.95 per month. Cancel anytime. The Gold and Ultimate Editions will be available as part of a Ubisoft+ subscription. More information at ubisoft-plus.com.